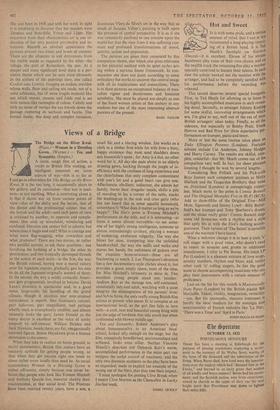 Views of a Bridge

The Bridge on the River Kwai. (Plaza.)-•---Woman in a Dressing Gown. (Warner.) — Tea and Sympathy. (Empire.) A GOOD, tough film of action, a credit to British film making, an intelligent comment on some aspects of war—this is as far as cargo in admiration for The Bridge on the River Kwai. It is far too long, it occasionally plays to The gallery, and its conclusion—that war is mad- ness—is not startling. What is interesting about it is that it shows war up from various points of -view—that of the shifty and the heroic, that of the doctor and the professional soldier, that of the boyish and the adult—and each point of view is criticised by another, its opposite and comple- ment. One ends up stimulated, wondering and confused. Heroism one cannot fail to admire, but -where does it begin and end? What is courage and what mere flag-wagging, what cowardice and what prudence? There are two stories, or rather two parallel actions, to ask these questions : one involving the building of a bridge, the other its destruction; and two ironically developed threads in the action of each story—in the first, the way the British colonel, having won a moral victory over his Japanese captors, gradually gets his men to do all the Japanese originally wanted of them; in the second, the way a mildly cowardly Ameri- can gets progressively involved in heroics. David Lean's direction is spectacular and, in a good sense, large-scale; his handling of the grand climax, though it involves one over-strained 'coincidence, is superb. Alec Guinness's colonel, part ludicrous, part magnificent, and perhaps wholly mad, is triumphantly credible, and almost sinisterly looks the part; James Donald as the camp doctor is excellent as the voice of sanity unspoilt by self-interest. William Holden and Jack Hawkins, beside them, are flat, evaggeratedly national figures. Sessue Hayakawa gives a human dimension to the enemy.

When they take to realism on home ground, to social commentary, British film makers have an uncanny aptitude for getting people wrong; so that when they get anyone right one tends to cheer rather more loudly than need be. As social commentary Woman in a Dressing Gown is rather off-centre, simply because one never be- lieves that people who look like Yvonne Mitchell :and Anthony Quayle live, however shabby their mackintoshes, at that social level. The Prestons Jhave been married twenty years, have a son, a

small flat and a blaring wireless. Jim works as a clerk in a timber firm while his wife lives a busy, happy existence that Must send shudders down any housewife's spine : for Amy is a slut, no other word for it. All day she pads about in an elderly dressing gown, hacking through the jungle of in- efficiency with the coolness of long experience and the cheerfulness that only complete contentment with one's lot and a good heart can give onc. Affectionate, ebullient, indiscreet, she adores her family, burns their irregular meals, shifts a pile of mending to lay a corner of the table, stacks the washing-up in the sink and cries gaily (who has not heard this in some squalid household, somewhere?) 'What does it matter so long as we're happy?' The film's point is Yvonne Mitchell's performance as the wife, and it is interesting—at times it seems almost incredible—to see some- one of her highly strung intelligence, someone so almost intimidatingly civilised, playing a woman of endearing, exuberant vulgarity. The way she blows her nose, trumpeting into the unfolded handkerchief, the way she sniffs and walks and moves her hands, the oafishness of gesture over the exquisite bone-structure—these are all fascinating to watch. J. Lee Thompson's direction has a few documentary-style cliches about it, but provides a good, empty space, most of the time, for Miss Mitchell's virtuosity to shine in. Two excellent young people stand out, besides: Andrew Ray as the teenage son, self-contained, unnaturally tidy and adult, watching with a quiet integrity the disintegration of his parents' lives; and Sylvia Syms, the only really young British film actress at present who seems fit to compete at an international level, as the girl Jim falls in love with—a cool, neat and beautiful young thing with just the edge of hardness that tidy youth has when confronted with blowsy middle age.

Tea and Sympathy, Robert Anderson's play about homosexuality in an American boys' school, looked silly enough on the stage, but the film, extensively bowdlerised, sentimentalised and softened, looks even sillier. Neither Vincente Minelli's direction nor Deborah Kerr's warm, accomplished performance in the main part can mitigate the awful naïveté of treatment, and the only two dramatic moments in the play have been so expanded, made so explicit (an example of the wrong use of the film), that they lose their impact.

I must apologise for putting Clive Brook when I meant Clive Morton as the Chancellor in Lucky Jim last week.