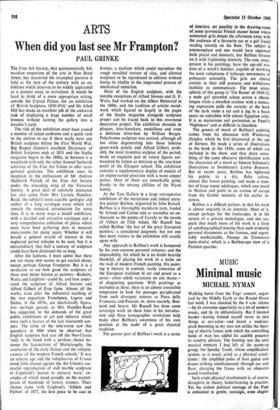 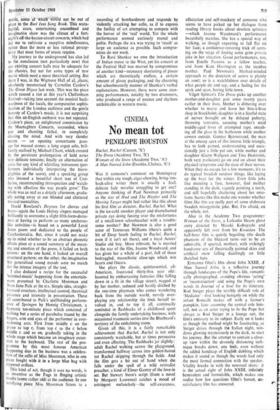 Walking home from the Fugs' concert, organ- ised by the Middle Earth at the Round House last week, I was shocked by the 4 a.m. silence —by its awesome superiority to a lot of modem music, and by its unfamiliarity. But I listened harder—having trained myself never to take things at ear-value—and heard a medium- pitch humming in my ears not unlike the buzz- ing of electric fences with which the controlling hand of man has added his audible presence to country silences. The buzzing was the only musical memory I had left of the warm-up group, the Spooky Tooth, whose amplification system, as is usual, acted as a physical condi- tioner : the amplified pulse of bass guitar and drums striking simultaneously through ear and floor, charging the frame with an obsessive sound transfusion.

Such crude physical involvement is, of course, disruptive in theory, habit-forming in practice. Yet the violent political message- of the Fugs is embodied in gentle, nostalgic, eves elegiac

music, some cif °Iitlelkiild not be out of place in the Burl Ives Song Book. This scata-

jogiCal, crass, entertaining unconfined and imaginative show was the climax of a fort- night's off-the-beaten-circuit concerts, which had led me to cultivate a receptive mindlessness, rather than the more or less rational percep- tivity that most forms of music require.

My journey to the underground has also led to the conclusion (not particularly new) that our existing concert halls may be adequate for the classics, but not for some types of new music which need a more theatrical setting. But there I was, in the Wigmore Hall of al, places, absolutely mesmerised by Cornelius Cardew's The Great Digest last week. This was the piece which caused a riot at this year's Cheltenham Festival—taking into account the musical back- wardness of the locals, the comparative sophis- tication of the London audience and the gentle honesty of Cardew's music, it is not surprising that this un-English outburst was not repeated. Cardew's piece, an enlightened commission by the Macnaghten Concerts, succeeded, where pop and chanting failed, in completely clearing the mind. And with very slender means — an opening concertante pass- age for massed stones; a long organ solo, bril- liantly realised by Michael Chant, which created by the persistent prolongation of held notes

very delicate tensions; finally an alternation of solos for any kind of whistling instrument (per-

formers individually interpreting the hiero- glyphics of the score), and a speaking group who intoned a beautiful short text of Con- fucius, recommending introspection and 'watch- ing with affection the way people growl' The whole was as real as a drizzly afternoon, gradu- ally eating away at our blinded and cluttered musical mentalities.

David Rowland's Degrees for chorus and brass—again the Louis Halsey singers managed brilliantly to overcome a slight fifth-form-dorm- ness at having to perform so many unchorus- like activities—is based on a powerful Leroi Jones poem and dedicated to the people of Czechoslovakia. But, since it could not make up its mind whether to be an abstract phonetic effects piece or a sound summary of the mean- ing and emotion of the poem, it failed on both counts: on the one hand, it lacked an overall structural pattern; on the other, the imaginative but generalised sound moods were no match for the intense imagery of the text.

Nam June Paik at the ICA. Simple idea, straight- forward structure, intellectual control, theatrical piesence and intensity in presentation. These all contributed to Paik's spellbinding perform- ance of Springen by Hennig Christiansen, a hypnotic ten-minute piece which consisted of nothing but a series of parabolas traced by the fingers, arm and eyes of the performer in ever- widening arcs. First from middle c on the piano to top c, from top c to the c below middle c and so on, gradually taking in the whole stage which became an imaginary exten- sion to the keyboard. The rest of the pro- gramme by this most famous American happening duo in the business was a celebra- tion of the cello of Miss Moorman, who in one piece fought with it in a large blue bag with zippered orifices.

This kind of act, though it uses no words, is as inventive as the rugs in flinging artistic insults' (some rather old) at the audience. In one terrifying piece Miss, Moorman listens to a recording of bombardment and responds by violently attacking her cello, as if to express the futility of art attempting to compete with the horror of the 'real' world. Yet the whole performance seemed curiously muted and polite. Perhaps the ICA was trying to 'reach' as large an audience as possible. Such compro- mises do not work.

To Ravi Shankar we owe the introduction of Indian music to the West, yet his concert at the Festival Hall was marred by compromises of another kind—necessary shortening of pieces which are theoretically endless, a certain amount of glossy packaging, and the charming but schoolmasterly manner of Shankar's verbal explanations. However, there were some stun- ning performances, notably by two drummers, who produced a range of nuance and rhythms unthinkable in western music.