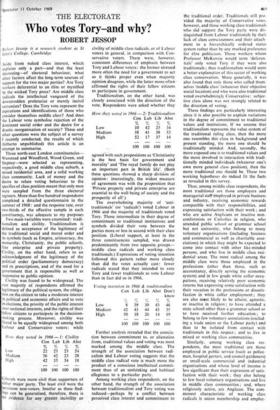 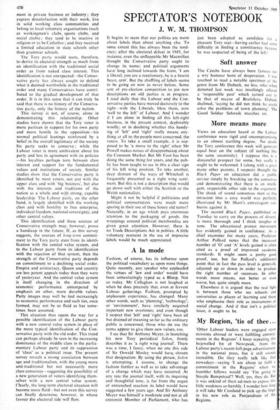 Aside from naked class interest, which explains only a part—and that the least interesting—of electoral behaviour, what other factors affect the long-term sources of support for the two major parties? Are Tory workers deferential to an elite or mystified by the wicked Tory press? Are middle class radicals the intellectual vanguard of the downtrodden proletariat or merely incivil extremists? Does the Tory vote represent the aspirations and identifications of those who consider themselves middle class? And does the Labour vote symbolise rejection of the dominant social order and the desire for a drastic reorganisation of society? These and other questions were the subject of a survey I recently conducted, the results of which (hitherto unpublished) this article is an attempt to summarise.

Three north-east London constituencies--- Wanstead and Woodford, Wood Green, and Stepney—were selected as representing, respectively, a good middle class suburb, a mixed residential area, and a solid working class community. Lack of money and the desire to relate voting behaviour to the specifics of class position meant that only men were sampled from the three electoral registers. Morethan five hundred respondents completed a detailed questionnaire in the summer of 1968: and the response rate, over two-thirds of the effective sample in each constituency, was adequate to my purposes Two main variables were examined: tradi- tionalism and civility. Traditionalism is defined as acceptance of the legitimacy of the traditional social and moral order and its symbols (such as Empire, aristocracy, the monarchy, Christianity, the public schools, free enterprise and private property). Civility, on the other hand, refers to an acknowledgment of the legitimacy of the political order (parliamentary democracy) and its prescriptions, and of the need for a government that is responsible as well as responsive to public opinion.

Civility was found to be widespread. The vast majority of respondents affirmed the legitimacy of the political system, the obliga- tion on the citizen to take a moderate interest in political and economic affairs and to vote in elections, the priority of the public interest over sectional interests, and the rights of their fellow citizens to participate in the decision- making process. Moreover, civility was found to be equally widespread among both Labour and Conservative voters: while How they voted in 1966 — 1: Civility Gan Lab Lib Abst % % % %

36 42 23 28 High 42 35 54 18 100 100 100 100 Liberals were more civil than supporters of either major party. The least civil were the persistent non-voters. Insofar as these find- ings can be generalised, therefore, there is no evidence for any greater incivility or civility of middle class radicals, or of Labour voters in general, in comparison with Con- servative voters. There were, however, consistent differences of emphasis between Tory and Labour voters: the former stressed more often the need for a government to act as it tilinks proper even when majority opinion disagrees, while the latter more often affirmed the rights of their fellow citizens to participate in government.

Traditionalism, on the other hand, was closely associated with the direction of the vote. Respondents were asked whether they

How they voted in 1966-2: Traditionalism

agreed, with such propositions as 'Christianity is the best basis for government and morality' and 'The royal family do not play an important part in British life'. (Both these questions showed a sharp division of opinion: interestingly, the widest measure of agreement was with the proposition that Private property and private enterprise are essential to the well-being of society and the prosperity of all'.)

The overwhelming majority of 'anti- traditionals' (or 'radicals') voted Labour in 1966 and the majority of traditionals voted Tory. Those intermediate in their degree of commitment to traditional institutions and symbols divided their vote between the parties more or less in accord with their class position. (Liberal support, at least in the three constituencies sampled, was drawn predominantly from two opposite groups— middle class radicals and working class traditionals.) Expressions of voting intention followed this pattern rather more closely than did the votes actually cast: fewer radicals stated that they intended to vote Tory and fewer traditionals to vote Labour than in fact did so in 1966.

Further analysis revealed that the associa- tion between commitment to, or alienation from, traditional values and voting was most marked among the middle class. The strength of the association between radi- calism itlid Labour voting suggests that the middle class radical vote is much more the product of a conscious intellectual commit- ment than of an unthinking and habitual allegiance to a particular party.

Among working class respondents, on the other hand, the strength of the association between traditionalism and Tory voting was reduced—perhaps by a conflict between perceived class interest and commitment to the traditional order. Traditionals still pro- vided the majority of Conservative votes,

however, and those working class traditionals who did support the Tory party were dis- tinguished from Labour traditionals by their lack of class consciousness and their attach- ment to a hierarchically ordered status system rather than by any marked preference for dlite politicians. Those workers whom Professor McKenzie would term `deferen- fiats' only voted Tory if they were also traditionals ; thus traditionalism would seem a better explanation of this sector of working class conservatism. More generally, it was also found that only those who called them- selves 'middle class' (whatever their objective social location) and who were also traditional voted overwhelmingly Conservative: subjec- tive class alone was not strongly related to the direction of voting.

These findings are particularly interesting since it is also possible to explain variations in the degree of commitment to traditional values and institutions. If we assume that traditionalism represents the value system of the traditional ruling class, then the more one resembles this class in background and present standing, the more one should be traditionally minded. And, secondly, the more exposed one is to traditional values and the more involved in interaction with tradi- tionally minded individuals (whatever one's own more general class position), then the more traditional one should be. These two working hypotheses do indeed fit the facts as revealed in this survey.

Thus, among middle class respondents, the most traditional are those employers and managerial stiff tin ployed in private business and industry, receiving economic rewards compatible with their responsibilities, and expressing satisfaction with their work ; and who are active Anglicans or inactive non- conformists or Catholics in religion, who attended public school or grammar school but not university, who belong to many voluntary organisations (including business and commercial as well as charitable asso- ciations) in which they might be expected to come into contact with other like-minded persons, and who live in middle class resi- dential areas. The most radical among the middle class were those employed in the professions (other than those, such as accountancy, directly serving the economic system) and in low grade white collar occu- pations, receiving relatively poor economic returns but expressing some satisfaction with their vocation in the professions or dissatis- faction in white collar employment ; they are also mast likely to be atheist, agnostic, or inactive in religion ; to have attended a state school other than a grammar school or to have received further education ; to belong to few voluntary associations (exclud- ing a trade union or the Labour party) and thus to be isolated from contact with traditionals in this respect ; and to live in mixed or working class communities.

Similarly, among working class res- pondents, the most traditional are those employed in public service (such as police- men, hospital porters, and council gardeners) or small-scale commercial and industrial organisations and whose level of income is less significant than their expression of satis- faction with their work ; they also belong to few local voluntary organisations and live in middle class communities ; and, where religiously active, are Anglican. The com- monest characteristic of working class radicals is union membership and employ- ment in private business or industry ; they express dissatisfaction with their work, live in solid working class communities and belong to local voluntary organisations (such as workingmen's clubs, sports clubs, and social clubs) ; they tend to be inactive in religion or to be Catholics ; and they received a limited education in state schools other than grammar schools.

The Tory party would seem, therefore, to derive its electoral strength as much from an identification with the traditional social order as from naked class interest. This identification is not unexpected—the Conser- vative party has always sought to defend what it deemed worthwhile in the traditional order and many Conservatives have contri- buted to the gradual development of that order. It is in this sense that it can truly be said that there is no history of the Conserva- tive party, only the history of the nation.

This survey is not, of course, alone in demonstrating this relationship. Other studies have shown that the Tory voter is more partisan in support for his own party and more hostile to the opposition—his normal political leanings reinforced by a belief in the overall legitimacy of the society his party seeks to conserve ; while the Labour voter is more ambivalent about his party and less in agreement with its policies —his loyalties perhaps torn between class interest and support for the fundamental values and institutions of society. Similar studies show that the Conservative party is identified by most voters, not just with the upper class and with 'big business', but also with the interests and traditions of the nation as a whole And with strong, capable leadership. The Labour party, on the other hand, is largely identified with the working class and with hostility to free enterprise, individual freedom, national sovereignty, and other central values.

This identification and these sources of Conservative strength may, however, prove a handicap in the future. If, as this survey suggests, the sources of long-term commit- ment to the Tory party stem from its identi- fication with the central value system, and to the Labour party from its identification with the rejection of that system, then the strength of the Conservative party depends on commitment to a declining social order. Empire and aristocracy, Queen and country are less potent appeals today than they were of yesteryear. And the central value system is itself changing in the direction of economic performance untempered by emphasis on other, more durable values. Party images may well be tied increasingly to economic performance and such ties, once formed, may not be so fluid as has some- times been assumed.

This situation thus opens the way for a possible identification of the Labour party with a new central value system in place of the more typical identification of the Con- servative party with the old order. This trend can perhaps already be seen in the increasing dominance of the middle class in the parlia- mentary Labour party and its suppression of 'class' as a political issue. The present survey reveals a strong association between age and traditionalism, with the young more anti-traditional but not necessarily more class-conscious—suggesting the possibility of a new generation of voters identifying them- selves with a new central value system. Clearly, the long-term electoral situation will become more fluid—but not even this survey can finally determine, however, in whose favour the electoral tide will flow.