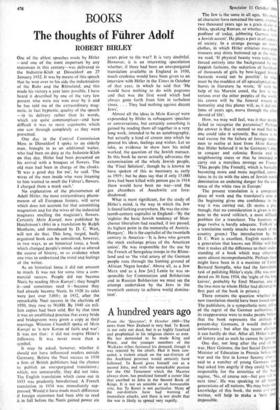 BOOKS The thoughts of Fiihrer Adolf

One of the ablest speeches made by Hitler —and one of the most important by any statesman in this century—was delivered to the Industrie-Klub at Dusseldorf on 27 January 1932. It was by means of this speech that he won over to his side the industrialists of the Ruhr and the Rhineland, and this made his victory a year later possible. I have heard it described by one of the very few present who were not won over by it and he has told me of the extraordinary mag- netic, in fact hypnotic, quality of the speech —in its delivery rather than its words, which are quite commonplace—and how difficult it was to resist arguments which one saw through completely as they were presented.

One day in the Control Commission Mess in Dusseldorf I spoke to an elderly man, brought in as an additional waiter, who had been on duty at the Industrie-Klub on that day. Hitler had been presented on his arrival with a bouquet of flowers. The old man had been in charge of the cloaks. 'It was a good day for me', he said. 'The wives of the men inside who were listening to him wanted to smell the Ftihrer's flowers. I charged them a mark each.'

No explanation of the phenomenon of Adolf Hitler, the most extraordinary pheno- menon of all European history, will serve which does not account for that astonishing magnetism and for the wives of the industrial magnates smelling the magician's flowers. Certainly Mein Kampf, now published by Hutchinson's (84s) in a translation by Ralph Manheim, and introduced by D. C. Watt, will not do that. This long, turgid, badly organised book can be considered, however, in two ways, as an historical force, a book which changed people's minds and so altered the course of history, or as evidence when one tries to understand the mind and feelings of the writer.

As an historical force it did not amount to much. It was not for some time a com- mercial success. People did not become Nazis by reading Mein Kampf ; they bought it—and sometimes read it—because they had already become Nazis. In 1928 its sales were just over 3,000; in 1932, after the remarkable Nazi success in the elections of 1930, they rose to -90,000.13y 1940 six mil- lion copies had been sold. But by that time it was an established practice that every bride and bridegroom were given a copy at their marriage. Winston Churchill spoke of Mein Kampf as 'a new Koran of faith and war'. It was not that : it did not inspire Hitler's followers. It was never more than a symbol.

It may be asked, however, whether it should not have influenced readers outside Germany. Before the Nazi success in 1930 a firm of British publishers had the chance to publish an unexpurgated translation ; which, not unnaturally, they did not take. The English translation which came out in 1933 was prudently bowdlerised. A French translation in 1934 was immediately sup- pressed. Would it have made much difference if foreign statesmen had been able to read it in full before the Nazis gained power six years prior to the war? It is very doubtful. However, it is an interesting speculation whether, if there had been an unexpurgated translation available in England in 1930, much credence would have been given to an interview with Hitler in the Times in October of that year, in which he said that 'He would have nothing to do with pogroms and that was the first word which had always gone forth from him in turbulent times. . . . They had nothing against decent Jews'.

Almost all the ideas in Mein Kampf were expounded by Hitler in subsequent speeches or conversations, but certainly something is gained by reading them all together in a very long work, intended to be an autobiography, but actually a kind of cistern into which he poured his ideas, feelings and wishes. Let us take, as evidence to show how his mind worked, the question of the Jewish menace. In this book he never actually advocates the extermination of the whole Jewish people, the 'Final Solution', though he is known- to have spoken of this as necessary as early as 1919; but he does say that if only 15,000 Jews had been killed with poison gas in 1914 there would have been no war—and the gas chambers of Auschwitz are fore- shadowed.

What is most significant, for the study of Hitler's mind, is the way in which the Jew is found lurking everywhere. He was the nine- teenth-century capitalist in England—Ty the 'eighties the basic Jewish tendency of Man- chester liberalism had reached, if not passed, its highest point in the monarchy of Austria- Hungary'. He is the capitalist of the twentieth century in America—It is Jews who govern the stock exchange prices of the American union'. He was responsible for the use by the French of Senegalese troops in the Rhine- land and so 'the vital artery of the German people runs through the hunting ground of African Negro hordes'. Above all, as a Jew Marx and as a Jew [sic] Lenin he was re- sponsible for Communism and Bolshevism and in Russian Bolshevism we must see the attempt undertaken by the Jews in the twentieth century to achieve world domina- tion'. The Jew is the same in all ages. 'His traits of character have remained the same, whether two thousand years ago as a grain dealer in Ostia, speaking Roman, or whether as a flour profiteer of today, jabbering German vinit a Jewish accent'. He plays a part in all aspects of society. In a strange passage on men's clothes, in which Hitler criticises stove-pipe trousers and shirts buttoned up at the neck, we read, 'If physical beauty were today not forced entirely into the background by our foppish fashions, the seduction of hundreds of thousands of girls by bow-legged Jewish bastards would not be possible'. In Mat must be the maddest of all apocalyptical out- bursts in literature he wrote, 'If with the help of his Marxist creed, the Jew is vic- torious over the other peoples of the world, his crown will be the funeral wreath of humanity and this planet will, as it did mil- lions of years ago, move through the ether devoid of life'.

How, we may well feel, was it that people failed to recognise the paranoiac? Perhaps the answer is that it seemed so mad that no one could take it seriously. But there is no real excuse for the failure of foreign states- men to realise at least from Mein Kampf that Hitler believed it to be Germany's duty to conquer and colonise Russia and its neighbouring states or that he intended to carry out a merciless revenge on France. 'This people [the French], which is basically becoming more and more negrified, consti- tutes in its tie with the aims of Jewish world domination an enduring danger for the exis- tence of the white race in Europe.'

The present translation is a competent piece of work and the translator's note at the beginning gives one confidence in the way it was carried out. (It seems a pity, though, that no consideration is given in this note to the word volkisch, a most difficult problem for a translator. The footnote on page twelve is hardly adequate. 'Folk ish' as a translation surely smacks too much of the country green.) The introduction by Mr D. C. Watt is excellent. English readers of a generation that knows not Hitler will find that it makes all the-difference to their under- standing of a book which may otherwise seem almost incomprehensible. Perhaps there might have been in it a mention of Father Bernard Stempfle, who had the formidable task of polishing Hitler's style. (He was mur- dered on 30 June 1934, the 'night of the long knives', probably by Emil Maurice, one of the two men to whom Hitler had dictated the first part of the book in prison.) There remains the question whether do new translation should have been issued now The publishers, in a sympathetic note, tell us of the regret of the German authorities. If its reappearance were to make people believe that the book represents the attitude of present-day Germans, it would indeed be unfortunate ; but after the recent elections it can hardly do that. After all, Hitler is Pa of history and as such he cannot be ignored One day, not long after the end of th war, Herr Grirnme, the last Social Dernocra Minister 'of Education in Prussia before th war and the first in Lower Saxony after i said to a number of young Germans wh had asked him angrily if they could he lie responsible for the atrocities of the NO regime, 'No, of course not—but you will next time'. He was speaking to all futu generations of all nations. We may hope that knowledge of this book, the most evil e‘er written, will help to make a 'next time impossible.