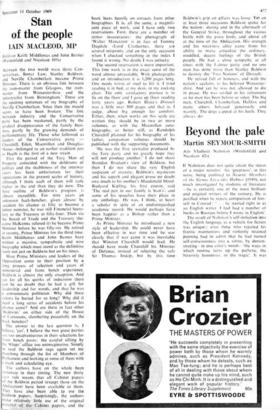 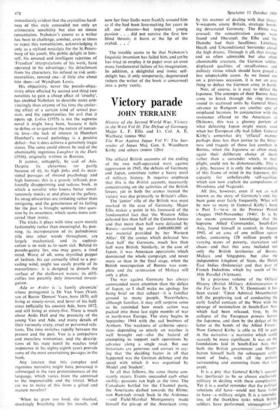 If Nabokov does not quite attain the status of a major novelist--his 'greatness', in this sense, being confined to Neartic Members of tlu, Genus Lyea:.ides Hubner (1949), not much investigated by students of literature —he is certainly one of the most brilliant and original writers of the century. He is justified when he rejects comparison of him- self to Conrad: '. . . he started right in as an English writer. 1 had had a number of books in Russian before I wrote in English'.

The result of Nabokov's self-initiation into the English language as a vehicle for fiction Was unique ; even those who rejected his frantic mannerisms and violently strained punning had to admit that he had turned self-consciousness into a virtue, by demon- strating—in one critic's words—'the ways in which routine turns up the pathetic, the bizarrely humorous, or the tragic'. It was immediately evident that the crystalline hard- ness of this style concealed not only an aristocratic sensibility but also an innate romanticism. Nabokov's course as a writer has been to challenge, combat, even at times to reject this romanticism, acknowledging it only as a stylised nostalgia for the St Peters- burg of his youth. His public delight in him- self, his amused and intelligent rejection of 'Freudian' interpretations of his work, have operated to his advantage ; his detachment from his characters, his refusal to risk senti- mentalities, remind one—if little else about him does—of Wyndham Lewis.

His objectivity, never the pseudo-objec- tivity often affected by second and third rate novelists to gain a cheap effect of 'cruelty', has enabled Nabokov to describe more con- vincingly than anyone of his time the enslav- ing effect of a certain kind of sexual pas- sion, and the opportunities for evil that it opens up. Lolita (1955) is not the supreme novel it might have been, because it fails to define or to question the nature of roman- tic love—the lack of interest in Humbert Humbert's sexual pathology is a positive defect—but it does achieve a genuinely tragic status. The same could almost be said of the abominably ingenious Laughter in the Dark (1936), originally written in Russian.

It cannot, unhappily, be said of Ada. Despite its cleverness (or partly because of it), its high jinks and its occa- sional passages of shrewd psychology and high humour, this is a grossly inflated, pro- foundly disappointing and tedious book, in which a novelist who knows better simul- taneously mocks at and plays to the gallery. Its smug obscurities are irritating rather than intriguing, and the genuineness of its feeling for the past is brought seriously into ques- tion by its smartness, which seems more con- ceited than ironic.

The tricks it plays with time seem merely fashionable rather than meaningful. Its pun- ning, its incorporation of its palindromic title into other words throughout, are largely mechanical, and its sophisti- cation is so stale as to seem sick. Behind its pseudo-gaiety lies, one may guess, a tired mind. Worst of all, some mystified puppet of fashion, his ear correctly tilted to a pre- vailing wind, might too easily prattle of its masterliness : it is designed to disturb the surface of the shallowest waters; its diffi- culties too patently defy interested investi- gation.

Ada or Ardor is 'a family chronicle' whose protagonist is Dr Van Veen (Van), son of Baron 'Demon' Veen, born 1870, still living at ninety-seven, and lover of his half,- sister (officially his cousin) Ada, born 1872, and still living at ninety-five. There is much about Ardis Hall and the precocity of the young Van and Ada, and many details of their variously crazy, cruel or perverted rela- tions. The time switches rapidly between the present and the past. Van is a compulsive and merciless womaniser, and the descrip- tions of his state (until he reaches total impotence in his eighty-eighth year) provide some of the most entertaining passages in the book.

Any interest that this complex and ingenious narrative might have possessed is submerged in the vast pretentiousness of the language, which varies from the contrived to the impenetrable and the trivial. What are we to make of this from a gifted and mature novelist?

'When he grew too loud, she shushed, shushingly breathing into his mouth, and now her four limbs were frankly around him as if she had been love-making for years in all our dreams—but impatient young passion . . . did not survive the first few blind thrusts; it burst at the lip of the orchid. . .

The trouble seems to be that Nabokov's linguistic invention has failed him, and yet he has tried to employ it to paper over an even more fundamental failure of his imagination. In addition, a delightful and ironic self- delight has, if only temporarily, degenerated (where the writer of the book is concerned) into a petty vanity.