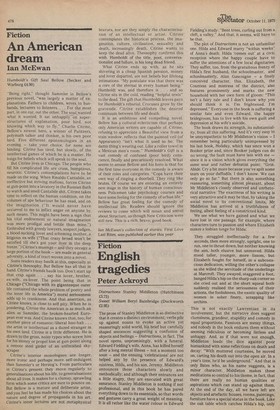 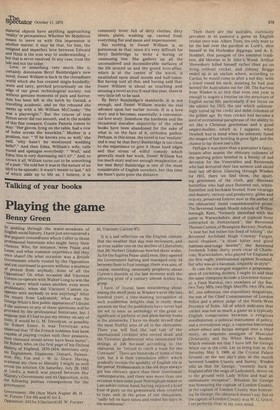 Distractions Stanley Middleton (Hutchinson £3.75) Sweet William Beryl Bainbridge (Duckworth £2.95) The prose of Stanley Middleton is so distinctive that it creates a distinct environment; verbs pile up against nouns to evoke an active yet reassuringly solid world, his brief but carefully shaped sentences suggesting a confusion of objects and feelings — Distractions, in fact. The novel opens, unpromisingly, with a funeral. Edward Fielding's wife, Anna, has killed herself after a long mental illness — not a moment too soon — and the ensuing 'celebrations' are not helped any by the presence of Edward's mistress, Hilda, and his son, Jeremy. Middleton announces these characters slowly and methodically; and although their entrances are a little stagey, they are executed with great assurance. Stanley Middleton is nothing if not professional, and in this book he has pared everything down to its essentials, so that words and gestures carry a great weight of meaning. It is all rather like the water colour in Edward Fielding's study: "Bent trees, curling out from a cleft, a valley." And that, it seems, will have to be that., The plot of Distractions is not an unfamiliar one. Hilda and Edward marry "within weeks" of Anna's death. Hilda 'comes out' at a civic reception where the happy couple have to suffer the attentions of a few local dignitaries. They suffer, too, from the gratuitous frenzy of Hilda's first husband, the schoolmaster, and schoolmasterly, Alan Gascoigne — a finely conceived character, this. Elizabeth, the Countess and mistress of the district, also features prominently and marks the new household with her own form of gloom: "This isn't a fairy tale and I don't know why you should think it is. I'm frightened. I'm depressed." Everyone in the book is suffering a similar fate and even Edward, the happy bridegroom, has to live with his own guilt and depression at his wife's suicide.

The book draws its strength, its substantiality, from all this suffering. And it's very easy to be unsympathetic to Mi. Middleton's vision — I remember being particularly unimpressed by his last book, Holiday, which has since won a Booker prize and, since Booker judges can do no wrong, the fault must have lain with me — since it is a vision which gives everything the same sour and rather defeatist point: "Grin. Abide. Cry a bit more because you've spilt some tears on your daffodils. I don't know. We can only go so far." But there is also something reassuring, something almost pleasant, about Mr Middleton's closely observed and unrhetorical narrative.' The exactness of his writing is very attractive and it may be that, by taking the social novel to its conventional limits, Mr Middleton has arrived at a truthfulness of feeling, albeit feeling of a constricted kind.

We see what we have gained and what we have lost in one passage, for example, where characters turn to passion and where Elizabeth makes a lesbian lunge for Hilda: They struggled ineffectually for a few seconds, then more strongly, upright, one to run, one to thrust down, but neither knowing the aim, both elusive but unmoved. Hilda stood taller, younger, more lissom, but Elizabeth fought for herself, in a subconscious dedication, willing the other's collapse as she willed the servitude of the underlings at Marcroft. They swayed, staggered a foot, banged Hilda's hip on the sharp oak corner so she cried out and at the short squeal both suddenly realised the seriousness of their actions, the foolishness, the exotic quality of women in sober finery, scrapping like urchins.

This is not exactly La wrentian in its involvement, but the narrative does suggest clumsiness, grandeur, stupidity and comedy in equal proportions. Passions are messy things, and nobody in the book endures them without seeming ridiculous or becoming listless and unhappy. And, as if that were not enough, Middleton loads the dice against poor humankind with some reflections on death and decay: "With muttered courtesies, he moved on, carting his death out into the open air. In a year's time, he'd be underground." And that is only Bates who, as his name suggests, is a minor character. Middleton makes these meditations so central to his theme, in fact, that there are really no human qualities or aspirations which can stand up against them. At the end of the day, all we have left are objects and artefacts: houses, rooms, paintings, furniture have a special status in the book. Like the oak table which catches Hilda's hip, only Material objects have anything approaching reality' or permanence. Whether Mr Middleton means to leave us with this impression is another matter; it may be that, for him, the resigned and imperfect love between Edward and Hilda is the true way to understanding — but that is never resolved. In any case, trust the tale and not the teller.

Love, or something very much like it, certainly dominates Beryl Bainbridges's new novel. Sweet William is back in the threadbare world which she has created single-handedly; worn and tatty, perched precariously on the edge of our great technological society, not Without genuine moments of pain and horror. Ann has been left in the lurch by Gerald, a travelling academic, and on the rebound she meets up with a Mr William McClusky: "He was a playwright." But the course of true fiction never did run smooth, and in the middle of this fine romance, Cousin Pamela comes to stay: "Her gloves, lying on the table, had a row of holes across the knuckles." Mother is a problem, too: "'If he knows you so well,' she said, 'why hasn't he mentioned wedding bells?'." And then Edna, William's wife, calls round and upstages everybody: "'Well,' said Edna,this is very distressing isn't it?'." And, to crown it all, William turns out to be something of a poet: "He told her it was in the nature of an idyll.to be episodic; it wasn't meant to last.'' All of which adds up to life as, I believe, it is

But nothing in Sweet William is as portentous as that, since it's very difficult for , Beryl. Bainbridge to write a boring or unamusing line. She gathers up all the unconsidered and inconsiderable surfaces of the life around us and the grand love-affair, which is at the centre of the novel, is established upon small moods and half-tones. But having said all this, and having said that Sweet William is about as touching and amusing a novel as you'll read this year, there is very little left to be said.

By Beryl Bainbridge's standards, it is not enough, and Sweet William marks no real advance upon her earlier novels. It is a love story and it becomes, essentially, a conventional love story. Somehow the hardness and the occasional macabre objectivity of the other books have been abandoned for the sake of what is, on the face of it, orthodox pathos. Perhaps, in this sense, the novel is too 'realistic' and it may be that Beryl Bainbridge is too close to the experience to give it those hard edges and that strain of wilful comedy which generally mark her work. Sweet William has too much story and not enough imagination; at her best Beryl Bainbridge is one of the most considerable of English novelists, but this time she hasn't quite gone the distance.