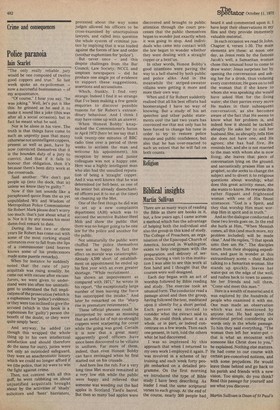 There are as many ways of reading the Bible as there are books in it, but, a few years ago, I came across a method which has the advantage of helping both the individual and also the group in this kind of study. The College of Preachers, an organisation of the Episcopal Church of America, located in Washington, exists to help clergymen with the preparation and delivery of sermons. During a visit to this institu-tion I was able to see this work at first hand and 1 thought that the courses were well designed.

Each day began with an act of worship followed by Bible reading and study. The exercise took an unusual form. The conductor read a passage aloud and then the group, having followed the text, meditated upon it silently for a short period. Each person was invited to consider what the extract said to him. He could think about it as a whole, or in part, or indeed concentrate on a few words. Then each one present, in turn, told the others what he had discovered.

I was so impressed by this approach that when I returned to my own work I employed it again. r was involved in a scheme of lay training and each week forty people embarked on a detailed programme. On the first morning we introduced the type of Bible study I have been describing. As leader I read the same scriptural verses to each group. At the end of the course, nearly 500 people had

heard it and commented upon it. I have kept their observations in my files and they provide immensely valuable material.

In each occasion we read St John, Chapter 4, verses 1-30. The main elements are these: at noon one day, as Jesus rests by the famous Jacob's well, a Samaritan woman chose this unusual hour to come to draw water; Jesus surprises her by opening the conversation and asking her for a drink, thus violating every convention; He goes on to tell the woman that if she knew to whom she was speaking she would have asked Him for the living water; she then parries every move He makes in their subsequent conversation, as she becomes aware of the fact that He seems to know what her problem is, and indeed how it should be tackled; abruptly He asks her to call her husband. She, as abruptly,tells Him she does not have one, and He agrees; she has had five, He reminds her, and she is not married to the man with whom she is now living; she leaves that piece of conversation lying on the ground, and sarcastically praises Him as a prophet; so she seeks to change the subject and to divert it to religious questions about worship; what does this great activity mean, she she wants to know. He rewards this rather flippant and frightened woman with one of His finest utterances: "God is a Spirit, and they that worship Him must worship Him in spirit and in truth."

And so the dialogue conducted at these two levels goes on. In the end she hurls at Him, "When Messiah comes, all this (and much more, my problem included) will be made clear." And He replies, "I that speak unto thee am He." The disciples return from their shopping expedition, and gaze in wonder at this extraordinary scene — their Rabbi talking to a Samaritan woman. She stands up quickly, leaves her water-pot on the edge of the well, and rushes back to town to assemble her friends and tell them, "Come and meet this man."

Here is a wealth of material and it was explored by the hundreds of people who examined it with me. One man made an observation which was not mentioned by anyone else. He had spent the devotional period considering six words only in the whole passage. To him they said everything. "The woman then left her water-pot — that is what an encounter with someone like Christ does to you," he explained. Nothing else matters. He had come to our course with certain pre-conceived notions, and with some prejudices. He would leave these behind and go back to his parish and friends with a new vision. Too simple, do you think? Read this passage for yourself and see what you discover.