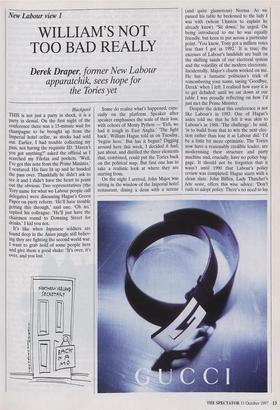 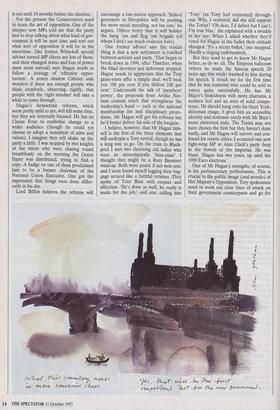 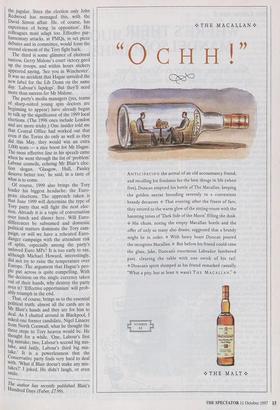 WILLIAM'S NOT TOO BAD REALLY

apparatchik, sees hope for the Tories yet

Blackpool THIS is not just a party in shock, it is a party in denial. On the first night of the conference there was a 15-minute wait for Champagne to be brought up from the Imperial hotel cellar, as stocks had sold out. Earlier, I had trouble collecting my pass, not having the requisite ID. 'Haven't You got anything?' asked the official as I searched my Filofax and pockets. 'Well, I've got this note from the Prime Minister,' I ventured. His face lit up and he handed the pass over. Thankfully he didn't ask to see it and I didn't have the heart to point out the obvious. Two representatives (the Tory name for what we Labour people call delegates) were discussing Hague's Green Paper on party reform. 'He'll have trouble getting this through,' said one. 'Oh no,' replied his colleague. 'He'll just have the chairmen round to Downing Street for drinks.' I kid you not.

It's like when Japanese soldiers are found deep in the Asian jungle still believ- ing they are fighting the second world war. I want to grab hold of some people here and give them a good shake: 'It's over, it's over, and you lost.' Some do realise what's happened, espe- cially on the platform. Speaker after speaker emphasises the scale of their loss, with echoes of Monty Python — 'Eeh, we had it tough in East Anglia.' The fight back', William Hague told us on Tuesday, 'begins here.' But has it begun? Digging around here this week, I decided it had, just about, and distilled the three elements that, combined, could put the Tories back on the political map. But first one has to take a realistic look at where they are starting from. On the night I arrived, John Major was sitting in the window of the Imperial hotel restaurant, dining a deux with a serene (and quite glamorous) Norma. As we passed his table he beckoned to the lady I was with (whom I hasten to explain he already knew). 'Sit down,' he urged. On being introduced to me he was equally friendly, but keen to put across a particular point. 'You know, Tony got a million votes less than I got in 1992.' It is true; the excesses of Labour's landslide are built on the shifting sands of our electoral system and the volatility of the modern electorate. Incidentally, Major's charm worked on me. He has a fantastic politician's trick of remembering your name, saying 'Goodbye, Derek' when I left. I realised how easy it is to get deluded; until we sat down at our table I was proudly reflecting on how I'd Just met the Prime Minister.

Despite the defeat this conference is not like Labour's in 1983. One of Hague's aides told me that he felt it was akin to Labour's in 1988. 'The challenge', he said, 'is to build from that to win the next elec- tion rather than lose it as Labour did.' I'd be a little bit more optimistic. The Tories now have a reasonably credible leader, are modernising their structure and party machine and, crucially, have no policy bag- gage. It should not be forgotten that it wasn't until 1990 that Labour's policy review was completed. Hague starts with a clean slate. John Biffen, Lady Thatcher's bete noire, offers this wise advice: 'Don't rush to adopt policy. There's no need to lay it out until 18 months before the election.'

For the present the Conservatives need to learn the art of opposition. One of the sharper new MPs told me that the party had to stop talking about what kind of gov- ernment it will be next time and sort out what sort of opposition it will be in the meantime. One former Whitehall special adviser turned MP (there are lots of those, and their changed status and loss of power must seem surreal) says Hague needs to follow a strategy of 'effective oppor- tunism'. A senior shadow Cabinet aide wonders if there are enough people who think creatively, observing, rightly, that people with the 'right mindset' will take a while to come through.

Hague's democratic reforms, which seem pretty mild to me, will kill some time, but they are internally focused. He has no Clause Four to symbolise change to a wider audience (though he could yet choose to adopt a statement of aims and values). I imagine they will shake up the party a little. I was stopped by two knights of the shires who were chasing round breathlessly on the morning the Green Paper was distributed, trying to find a copy. A badge on one of them proclaimed him to be a former chairman of the National Union Executive. One got the impression that things were done differ- ently in his day.

Lord Biffen believes the reforms will encourage a one-nation approach. 'School governors in Shropshire will be pushing for more social spending, not tax cuts,' he argues. Others worry that it will bolster the hang 'em and flog 'em brigade (of whom I don't see much evidence here).

One former adviser says the crucial thing is that a new settlement is reached between activists and party. 'That began to break down in 1990, after Thatcher, when the blind devotion and deference stopped. Hague needs to appreciate that the Tory grass-roots offer a simple deal: we'll back you 100 per cent if you deliver 100 per cent.' Underneath the talk of 'members' power', the proposals from Archie Nor- man contain much that strengthens the leadership's hand — such as the national membership list and disciplinary proce- dures. Mr Hague will get his reforms but he'd better deliver his side of the bargain.

I believe, however, that Mr Hague him- self is the first of the three elements that will underpin a Tory revival, though he has a long way to go. On the train to Black- pool I met two charming old ladies who were so stereotypically 'blue-rinse' I thought they might be a Rory Bremner wind-up. Both wore pearls if not twin sets, and I soon found myself lugging their bag- gage around like a faithful retainer. They spoke of Tony Blair with respect and affection. 'He's done so well, he really is made for the job,' said one, calling him 'Tony' (as Tony had requested) through- out. Why, I ventured, did she still support the Tories? 'Oh dear, I'd defect but I can't, I'm true blue,' she explained with a twinlde in her eye. When I asked whether they'd voted for Hague in the ballot their attitude changed. 'It's a secret ballot,' one snapped. Hardly a ringing endorsement.

But they need to get to know Mr Hague better, as do we all. The Empress ballroom (where he made the famous speech 20 years ago this week) warmed to him during his speech. It struck me for the first time that he was someone who could be sold to voters quite successfully. He has Mr Major's blokishness with more charisma, a modern feel and an aura of solid compe- tence. He should hang onto his blunt York- shireman image, it gives him an accessible identity and contrasts nicely with Mr Blair's more rhetorical style. The Tories may not have chosen the best but they haven't done badly, and Mr Hague will survive and con- found his recent critics. I cornered one new right-wing MP at Alan Clark's party deep in the bowels of the Imperial. He was blunt. 'Hague has two years, up until the 1999 Euro elections.'

One of Mr Hague's strengths, of course, is his parliamentary performance. This is crucial to the public image (and morale) of Her Majesty's Opposition. Tory spokesmen need to work out clear lines of attack on their government counterparts and go for the jugular. Since the election only John .Redwood has managed this, with the David Simon affair. He, of course, has experience of being 'in opposition'. His colleagues must adapt too. Effective par- liamentary attacks, at PMQs, in set piece debates and in committee, would form the second element of the Tory fight back.

The third is some glimmer of electoral success. Gerry Malone's court victory geed up the troops, and within hours stickers appeared saying, 'See you in Winchester'. It was no accident that Hague unveiled the new label for the Lib Dems on the same day: 'Labour's lapdogs'. But they'll need more than success for Mr Malone.

The party's media managers (yes, teams of sharp-suited young spin doctors are beginning to appear) have already begun to talk up the significance of the 1999 local elections. (The 1998 ones include London and are more tricky.) One insider told me that Central Office had worked out that even if the Tories do only as well as they did this May, they would win an extra 1,000 seats — a nice boost for Mr Hague. The most effective line in his speech came When he went through the list of 'problem' Labour councils, echoing Mr Blair's elec- tion slogan. 'Glasgow, Hull, Paisley deserve better too,' he said, in a taste of What is to come.

Of course, 1999 also brings the Tory leader his biggest headache: the Euro- Pean elections. The approach taken is that June 1999 will determine the type of Tory party that will fight the next elec- tion. Already it is a topic of conversation over lunch and dinner here. Will Euro- differences be subsumed and domestic political matters dominate the Tory cam- paign, or will we have a reheated Euro- danger campaign with the attendant risk of splits, especially among the party's unloved Euro MPs? It is too early to say, although Michael Howard, interestingly, did not try to raise the temperature over Europe. The argument that Hague's peo- ple put across is quite compelling. With the decision on the single currency taken out of their hands, why destroy the party over it? 'Effective opportunism' will prob- ably triumph in the end. That, of course, brings us to the essential Political truth: almost all the cards are in Mr Blair's hands and they are for him to deal. As I chatted around in Blackpool, I asked one former candidate, Nigel Linacre from North Cornwall, what he thought the three steps to Tory heaven would be. He thought for a while. 'One, Labour's first big mistake; two, Labour's second big mis- take, and lastly, Labour's third big mis- take.' It is a powerlessness that the Conservative party finds very hard to deal with. 'What if Blair doesn't make any mis- takes?' I joked. He didn't laugh, or even smile.