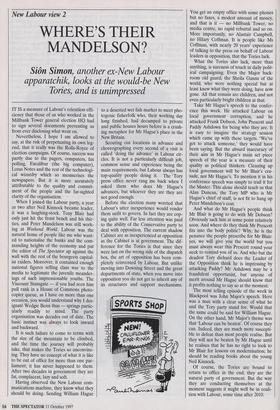 apparatchik, looks at the would-be New Tories, and is unimpressed

IT IS a measure of Labour's relentless effi- ciency that those of us who worked in the Milbank Tower general election HQ had to sign several documents preventing us from ever disclosing what went on.

Nevertheless, I hope I am allowed to say, at the risk of perpetuating its own leg- end, that it really was the Rolls-Royce of election campaigns. Of course, success was partly due to the pagers, computers, fax polling, Excalibur (the big computer), Lotus Notes and the rest of the technologi- cal wizardry which so mesmerises the newspapers. But it is more accurately attributable to the quality and commit- ment of the people and the far-sighted clarity of the organisation.

When I joined the Labour party, a year or two after Neil Kinnock became leader, it was a laughing-stock. Tony Blair had only just hit the front bench and his thir- ties, and Peter Mandelson was still work- ing at Weekend World. Labour was the natural home of people like me who want- ed to nationalise the banks and the com- manding heights of the economy and put the editor of The Spectator up against the wall with the rest of the bourgeois capital- ist raiders. Moreover, it contained enough national figures selling class war to the media to legitimate the juvenile meander- ings of such impressionable youths. The Viscount Stansgate — if you had seen him pull rank in a House of Commons photo- copier queue, as I have on more than one occasion, you would understand why I des- ignate Wedgie Benn thus — springs partic- ularly readily to mind. The party organisation was decades out of date. The basic instinct was always to look inward and backward.

It is such failure to come to terms with the size of the mountain to be climbed, and the time the journey will probably take, that makes the Tories so unconvinc- ing. They have no concept of what it is like to be out of office for more than one par- liament; it has never happened to them. After two decades in government they are fat, complacent, lazy and soft.

Having observed the New Labour com- munications machine, they know what they should be doing. Sending William Hague to a deserted wet fish market to meet pho- togenic fisherfolk who, their working day long finished, had decamped to private and public houses hours before is a crush- ing metaphor for Mr Hague's place in the New Britain.

Scouting out locations in advance and choreographing every second of a visit is called 'doing the advance' in Labour cir- cles. It is not a particularly difficult job, common sense and experience being the main requirements, but Labour always has top-quality people doing it. The 'Tory press office never rang me back when I asked them who does Mr Hague's advances, but whoever they are they are not good enough.

Before the election many worried that Labour's utter inexperience would render them unfit to govern. In fact they are cop- ing quite well. Far less attention was paid to the ability of the Conservative party to deal with opposition. The current shadow Cabinet are as inexperienced at opposition as the Cabinet is at government. The dif- ference for the Tories is that since they were last on the wrong side of the dispatch box, the art of opposition has been com- pletely reinvented by Labour. But unlike moving into Downing Street and the great departments of state, when you move into opposition you do not get to inherit any of its structures and support mechanisms. You get an empty office with some phones but no faxes, a modest amount of money, and that is it — no Millbank Tower, no media centre, no rapid rebuttal and so on. More importantly, no Alastair Campbell, no Hilary Coffman. It is people like Ms Coffman, with nearly 20 years' experience of talking to the press on behalf of Labour leaders in opposition, that the Tories lack.

What the Tories also lack, more than anything, is sureness of touch in daily polit- ical campaigning. Even the Major back- room old guard, the Sheila Gunns of the world, who were nothing special but at least knew what they were doing, have now gone. All that remain are children, and not even particularly bright children at that.

Take Mr Hague's speech to the confer- ence this week. He attacked Labour on local government corruption, and he attacked Frank Dobson, John Prescott and Paddy Ashdown for being who they are. It is easy to imagine the strategy session which came up with these targets. 'We've got to attack someone,' they would have been saying. But the absurd inaccuracy of their aim in Mr Hague's main set piece speech of the year is a measure of their quality as political thinkers. Cleaning up local government will be Mr Blair's cru- sade, not Mr Hague's. To mention it in his conference speech was simply to trail it for the Master. This alone should teach us that Alan Duncan, the Tory MP who is Mr Hague's chief of staff, is not fit to hang up Peter Mandelson's coat.

And what do Mr Hague's people think Mr Blair is going to do with Mr Dobson? Obviously sack him at some point relatively soon. And where do they think Mr Prescott fits into the body politic? Why, he is the penance the people prescribe for Mr Blair: yes, we will give you the world but you must always wear this Prescott round your neck to remind you of us. And who but the deadest Tory diehard does the Leader of the Opposition think he is impressing by attacking Paddy? Mr Ashdown may be a fraudulent opportunist, but anyone of merit around Mr Hague should know that it profits nothing to say so at the moment.

The most telling episode of the week in Blackpool was John Major's speech. Here was a man with a clear sense of what he and the Tory party stand for. Would that the same could be said for William Hague. On the other hand, Mr Major's theme was that 'Labour can be beaten'. Of course they can. Indeed, they are much more suscepti- ble to defeat than most people realise. But they will not be beaten by Mr Hague until he realises that he has no right to look to Mr Blair for lessons on modernisation; he should be reading books about the young Neil 1Cinnock.

Of course, the Tories are bound to return to office in the end; they are the natural party of government. But the way they are conducting themselves at the moment suggests it might well be in coali- tion with Labour, some time after 2010.