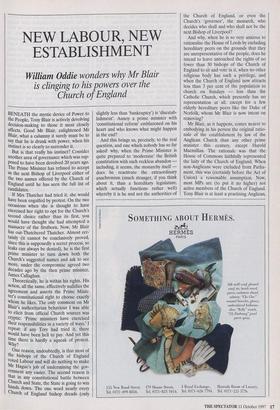 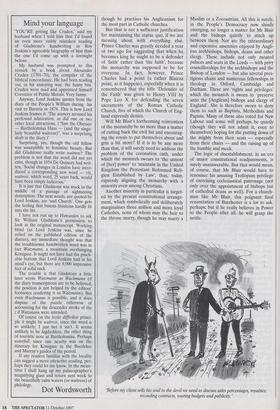 is clinging to his powers over the Church of England

BENEATH the mystic device of Power to the People, Tony Blair is actively devolving decision-making to those it most closely affects. Good Mr Blair, enlightened Mr Blair, what a calumny it surely must be to say that he is drunk with power, when his distinct is so clearly to surrender it. But is that really his instinct? Consider another area of governance which was sup- posed to have been devolved 20 years ago. The Prime Minister has refused to accept as the next Bishop of Liverpool either of the two names offered by the Church of England until he has seen the full list of candidates.

If Mrs Thatcher had tried it, she would have been engulfed by protest. On the two occasions when she is thought to have exercised her right to opt for the Church's second choice rather than its first, you would have thought she had attempted a. massacre of the firstborn. Now, Mr Blair has out-Thatchered Thatcher. Almost cer- tainly (it cannot be conclusively proved, since this is supposedly a secret process, so leaks can always be denied), he is the first Prime minister to turn down both the Church's suggested names and ask to see more, under the compromise agreed two decades ago by the then prime minister, James Callaghan. Theoretically, he is within his rights. His action, all the same, effectively nullifies the agreement and asserts the Prime Minis- ter's constitutional right to choose exactly Whom he likes. The only comment on Mr 13lair's authoritarian behaviour I was able to elicit from official Church sources was Cryptic: 'Prime ministers have exercised their responsibilities in a variety of ways.' I repeat: if any Tory had tried it, there Would have been hell to pay. And yet this time there is hardly a squeak of protest. Why?

One reason, undoubtedly, is that most of the bishops of the Church of England voted Labour and will do nothing to make Mr Hague's job of undermining the gov- ernment any easier. The second reason is that in any constitutional battle between Church and State, the State is going to win hands down. The one word nearly every Church of England bishop dreads (only slightly less than 'bankruptcy') is `disestab- lishment'. Annoy a prime minister with 'constitutional reform' emblazoned on his heart and who knows what might happen in the end?

And this brings us, precisely, to the real question, and one which nobody has so far asked: why, when the Prime Minister is quite prepared to 'modernise' the British constitution with such reckless abandon — including, it seems, the monarchy itself — does he reactivate the extraordinary anachronism (much stranger, if you think about it, than a hereditary legislature, which actually functions rather well) whereby it is he and not the authorities of the Church of England, or even the Church's 'governor', the monarch, who decides who shall and who shall not be the next Bishop of Liverpool?

And why, when he is so very anxious to rationalise the House of Lords by excluding hereditary peers on the grounds that they are unrepresentative of the people, does he intend to leave untouched the rights of no fewer than 30 bishops of the Church of England to sit and vote in it, when no other religious body has such a privilege, and when the Church of England now attracts less than 3 per cent of the population to church on Sundays — less than the Catholic Church, which presently has no representation at all, except for a few elderly hereditary peers like the Duke of Norfolk, whom Mr Blair is now intent on removing?

Mr Blair, as it happens, comes nearer to embodying in his person the original ratio- nale of the establishment by law of the Anglican Church than any other prime minister this century, except Harold Macmillan. The rationale was that the House of Commons faithfully represented the laity of the Church of England. When non-Anglicans were excluded from Parlia- ment, this was (certainly before the Act of Union) a reasonable assumption. Now, most MPs are (to put it no higher) not active members of the Church of England. Tony Blair is at least a practising Anglican, though he practises his Anglicanism for the most part in Catholic churches.

But that is not a sufficient justification for maintaining the status quo, if we are messing about with everything else. Prince Charles was greatly derided a year or two ago for suggesting that when he becomes king he ought to be a defender of 'faith' rather than 'the faith', because the monarchy was supposed to be for everyone. In fact, however, Prince Charles had a point (a rather Blairist point, as it happens), especially when it is remembered that the title 'Defender of the Faith' was given to Henry VIII by Pope Leo X for defending the seven sacraments of the Roman Catholic Church, five of which the Church of Eng- land expressly denies.

Will Mr Blair's forthcoming reinvention of the monarchy be no more than a matter of cutting back the civil list and encourag- ing the royals to put themselves about and grin a bit more? If it is to be any more than that, it will surely need to address the problem of the coronation oath, under which the monarch swears to 'the utmost of [her] power' to 'maintain in the United Kingdom the Protestant Reformed Reli- gion Established by Law', thus, today, expressly aligning the monarchy with a minority even among Christians.

Another minority in particular is target- ed by the present constitutional arrange- ment, which symbolically and deliberately marginalises three million and more loyal Catholics, none of whom may the heir to the throne marry, though he may marry a Muslim or a Zoroastrian. All this is surely, in the People's Democracy now shinily emerging, no longer a matter for Mr Blair and the bishops quietly to stitch up between them. Nor are the extraordinary and expensive amenities enjoyed by Angli- can archbishops, bishops, deans and other clergy. These include not only moated palaces and seats in the Lords — with privy councillorships for the archbishops and the Bishop of London — but also several pres- tigious chairs and numerous fellowships in theology in Oxford, Cambridge and Durham. These are 'rights and privileges' which the monarch is sworn to 'preserve unto the [Anglican] bishops and clergy of England'. She is therefore sworn to deny them to such as Baptists, Methodists and Papists. Many of these also voted for New Labour and some will perhaps be quietly (though they will not admit it, even to themselves) hoping for the putting down of the mighty from their seats — especially from their chairs — and the raising up of the humble and meek.

The logic of disestablishment, in an era of major constitutional readjustments, is surely unanswerable. But that would mean, of course, that Mr Blair would have to renounce his amusing Trollopian privilege of exercising ecclesiastical patronage (not only over the appointment of bishops but of cathedral deans as well). For a church- man like Mr Blair, this poignant final renunciation of Barchester is a lot to ask, perhaps; but if he really believes in Power to the People after all, he will grasp the nettle.

'Before my client sells his soul to the devil we need to discuss sales percentages, royalties, recording contracts, touring budgets and publicity.'