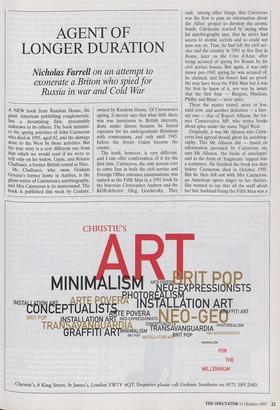 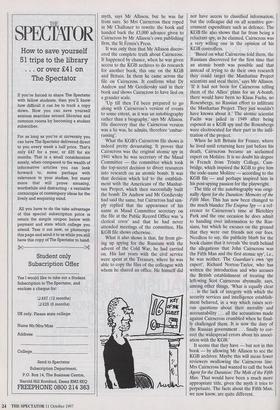 Nicholas Farrell on an attempt to

A NEW book from Random House, the giant American publishing conglomerate, has a devastating flaw, presumably unknown to its editors. The book minimis- es the spying activities of John Cairncross Who died in 1995, aged 82, and the damage done to the West by those activities. But the true story is a very different one from that which we would read if we were to rely only on his widow, Gayle, and Ronnie Challoner, a former British consul in Nice.

Mr Challoner, who owns Graham Greene's former home in Antibes, is the ghost-writer of Cairncross's autobiography, and Mrs Cairncross is its mastermind. The book is published this week by Century, owned by Random House. Of Cairncross's spying, it merely says that what little there was was innocuous to British interests, done under duress because he feared exposure for his undergraduate flirtations with communism, and only until 1945, before the Soviet Union became the enemy.

The truth, however, is very different, and I can offer confirmation of it for the first time. Caimcross, the only person ever to come first in both the civil service and Foreign Office entrance examinations, was named as the Fifth Man in a 1991 book by the historian Christopher Andrew and the KGB defector Oleg Gordievsky. They said, among other things, that Cairncross was the first to pass on information about the Allies' project to develop the atomic bomb. Cairncross reacted by saying what his autobiography says, that he never had access to atomic secrets and so could not pass any on. True, he had left the civil ser- vice and the country in 1951 to live first in Rome, later on the Cote d'Azur, after being accused of spying for Russia by his civil service bosses, But again, it was only minor pre-1945 spying he was accused of, he claimed, and his bosses had no proof. He may have been the Fifth Man but it was the first he knew of it, nor was he aware that the first four — Burgess, Maclean, Philby and Blunt — were spies.

There the matter rested, more or less, until now, and another defection — a liter- ary one — that of Rupert Allason, the for- mer Conservative MP, who writes books about spies under the name Nigel West.

Originally, it was Mr Allason who Cairn- cross had agreed should ghost his autobiog- raphy. This Mr Allason did — based on information provided by Cairncross on, says Mr Allason, 'the backs of envelopes' and in the form of 'fragments' tapped into a computer. He finished the book ten days before Cairncross died in October 1995. But he then fell out with Mrs Cairncross, an American opera singer in her thirties. She wanted to say that all the stuff about her late husband being the Fifth Man was a myth, says Mr Allason, but he was far from sure. So Mrs Cairncross then roped in Mr Challoner to rewrite the book and handed back the 0,000 advance given to Cairncross by Mr Mason's own publishing firm, the St Ermin's Press.

It was only then that Mr Mason discov- ered the complete truth about Cairncross. It happened by chance, when he was given access to the KGB archives to do research for another book, this one on the KGB and Britain. In them he came across the file on Cairncross. It confirms what Dr Andrew and Mr Gordievsky said in their book and shows Cairncross to have lied on a grander scale.

'Up till then I'd been prepared to go along with Cairncross's version of events to some extent, as it was an autobiography rather than a biography,' says Mr Allason. His discovery that the Cairncross version was a lie was, he admits, therefore 'embar- rassing'.

What the KGB's Cairncross file shows is indeed pretty devastating. It proves that Cairncross was the original atomic spy in 1941 when he was secretary of the Maud Committee — the committee which took the top-secret decision to divert resources into research on an atomic bomb. It was that decision which led to the establish- ment with the Americans of the Manhat- tan Project, which then successfully built the bomb. Dr Andrew and Mr Gordievsky had said the same, but Cairncross had sim- ply replied that the appearance of his name as Maud Committee secretary on the file at the Public Record Office was 'a clerical error' and that he had never attended meetings of the committee. His KGB file shows otherwise.

What it also shows is that, far from giv- ing up spying for the Russians with the advent of the Cold War, he had carried on. His last years with the civil service were spent at the Treasury, where he was able to copy the files of the colleague with whom he shared an office. He himself did not have access to classified information, but the colleague did on all sensitive gov- ernment expenditure such as defence. The KGB file also shows that far from being a reluctant spy, as he claimed, Cairncross was a very willing one in the opinion of his KGB controllers.

'Based on what Cairncross told them, the Russians discovered for the first time that an atomic bomb was possible and that instead of trying to do their own research they could target the Manhattan Project scientists and steal theirs,' says Mr Mason. 'If it had not been for Cairncross telling them of the Allies' plans for an A-bomb, there would have been no Klaus Fuchs, no Rosenbergs, no Russian effort to infiltrate the Manhattan Project. They just wouldn't have known about it.' The atomic scientist Fuchs was jailed in 1949 after being exposed as a KGB spy and the Rosenbergs were electrocuted for their part in the infil- tration of the project.

When he left Britain for France, where he lived until returning here just before his death, Cairncross became an acclaimed expert on Moliare. It is no doubt his degree in French from Trinity College, Cam- bridge, which inspired the KGB to give him the code-name Moliere — according to the KGB file — and perhaps inspired him in his post-spying passion for the playwright.

The title of the autobiography was origi- nally Agent for the Duration: Memoirs of the Fifth Man. This has now been changed to the much blander The Enigma Spy — a ref- erence to Caimcross's time at Bletchley Park and the one occasion he does admit to handing over information to the Rus- sians, but which he excuses on the ground that they were our friends not our foes. Needless to say, the publicity blurb for the book claims that it reveals 'the truth behind the allegations that John Cairncross was the Fifth Man and the first atomic spy', i.e., he was neither. The Guardian's own 'spy expert', Richard Norton-Taylor, who has written the introduction and who accuses the British establishment of treating the left-wing Scot Cairncross abysmally, says, among other things, 'What is equally clear . . . is the lack of integrity with which the security services and intelligence establish- ment behaved, in a way which raises seri- ous questions about their morality and accountability . . . all the accusations made against Cairncross crumbled when he final- ly challenged them. It is now the duty of the Russian government . . . finally to cor- rect the widespread errors about his associ- ation with the KGB.'

It seems that they have — but not in this book — by allowing Mr Allason to see the KGB archives. Maybe this will mean fewer reviewers swallowing the Cairncross line. Mrs Cairncross had wanted to call the book Agent for the Duration: The Myth of the Fifth Man. That would have been a much more appropriate title, given the myth it tries to perpetuate. The facts about the Fifth Man, we now know, are quite different.