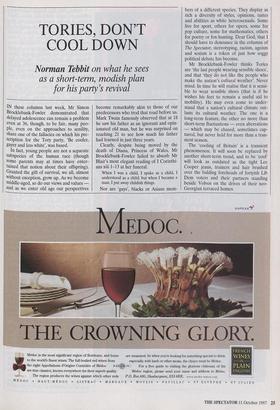 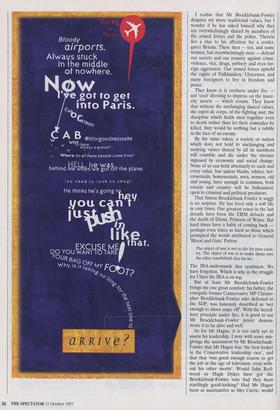 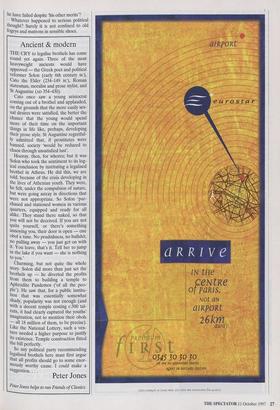 Norman Tebbit on what he sees

as a short-term, modish plan for his party's revival

IN these columns last week, Mr Simon Brocklebank-Fowler demonstrated that delayed adolescence can remain a problem even at 36, though, to be fair, many peo- ple, even on the approaches to senility, share one of the fallacies on which his pre- scription for the Tory party, 'Be cooler, gayer and less white', was based.

In fact, young people are not a separate subspecies of the human race (though some parents may at times have enter- tained that notion about their offspring). Granted the gift of survival, we all, almost Without exception, grow up. As we become middle-aged, so do our views and values — and as we enter old age our perspectives become remarkably akin to those of our predecessors who trod that road before us. Mark Twain famously observed that at 18 he saw his father as an ignorant and opin- ionated old man, but he was surprised on reaching 21 to see how much his father had learned in just three years.

Clearly, despite being moved by the death of Diana, Princess of Wales, Mr Brocklebank-Fowler failed to absorb Mr Blair's most elegant reading of I Corinthi- ans xiii 1-13 at her funeral:

Nor are 'gays', blacks or Asians mem- bers of a different species. They display as rich a diversity of styles, opinions, tastes and abilities as white heterosexuals. Some live for sport, others for opera, some for pop culture, some for mathematics, others for poetry or fox-hunting. Dear God, that I should have to denounce in the columns of The Spectator, stereotyping, racism, ageism and sexism is a token of just how soggy political debate has become.

Mr Brocklebank-Fowler thinks Tories are 'the last people wearing sensible shoes', and that 'they do not like the people who make the nation's cultural weather'. Never mind. In time he will realise that it is sensi- ble to wear sensible shoes (that is if he wishes his feet to remain a useful aid to mobility). He may even come to under- stand that a nation's cultural climate out- lasts its cultural weather. The one is a long-term feature, the other no more than short-term fluctuations — even aberrations — which may be chased, sometimes cap- tured, but never held for more than a tran- sient season.

The 'cooling of Britain' is a transient phenomenon. It will soon be replaced by another short-term trend, and to be 'cool' will look as outdated as the tight Lee Cooper jeans, trainers and hair brushed over the balding foreheads of fortyish Lib Dem voters and their partners standing beside Volvos on the drives of their neo- Georgian terraced homes. I realise that Mr Brocklebank-Fowler despises my more traditional values, but I wonder if he has asked himself why they are overwhelmingly shared by members of the armed forces and the police. Therein lies a clue to his affection for a cooler, gayer Britain. These men —yes, and some women, but overwhelmingly men — defend our society and our country against crime, violence, vice, drugs, yobbery and even for- eign aggression. Our armed forces uphold the rights of Falklanders, Ulstermen and many foreigners to live in freedom and peace.

They know it is coolness under fire — not 'cool' dressing to impress on the inner- city streets — which counts. They know that without the unchanging shared values, the esprit de corps, of the fighting unit, the discipline which holds men together even to death rather than let their comrades be killed, they would be nothing but a rabble in the face of an enemy.

By the same token, a society or nation which does not hold to unchanging and undying values shared by all its members will crumble and die under the stresses imposed by economic and social change. None of us can hold absolutely to each and every value, but unless blacks, whites, het- erosexuals, homosexuals, men, women, old and young, have enough in common, both society and country will be balkanised, open to criminal and political predators.

That Simon Brocklebank-Fowler is soggy is no surprise. He has lived only a soft life in easy times. Our greatest crises in the last decade have been the ERM debacle and the death of Diana, Princess of Wales. But hard times have a habit of coming back — perhaps even times as hard as those which prompted the words attributed to General 'Blood and Guts' Patton: The object of war is not to die for your coun- try. The object of war is to make damn sure the other sonofabitch dies for his.

The IRA understands that sentiment. We have forgotten. Which is why in the struggle for Ulster the IRA is on top.

As for Mr Hague, it is too early yet to assess his leadership. I note with some mis- givings the assessment by Mr Brocklebank- Fowler that Mr Hague was 'the best looker in the Conservative leadership race', and that that 'was good enough reason to get the job in the age of television, even with- out his other merits'. Would John Red- wood or Hugh Dykes have got the Brocldebank-Fowler vote had they been startlingly good-looking? Had Mr Hague been as unattractive as Mrs Currie, would he have failed despite 'his other merits'? Whatever happened to serious political thought? Surely it is not confined to old fogeys and matrons in sensible shoes.