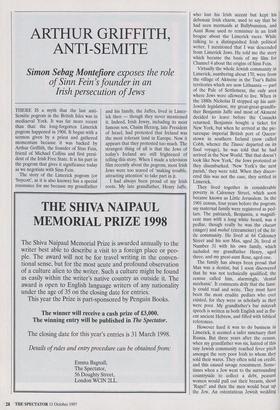 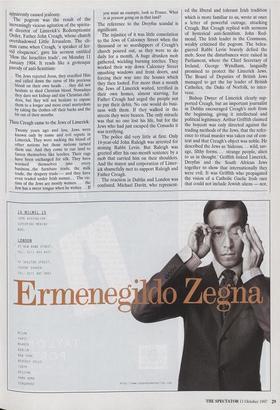 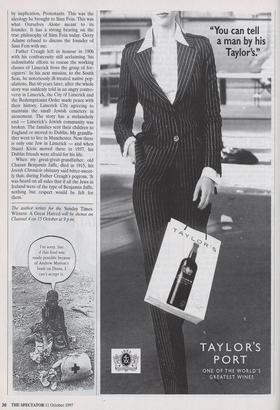 of Sinn Fein's founder in an Irish persecution of Jews

THERE IS a myth that the last anti- Semitic pogrom in the British Isles was in mediaeval York. It was far more recent than that: the long-forgotten Limerick pogrom happened in 1904. It began with a sermon given by a priest and gathered momentum because it was backed by Arthur Griffith, the founder of Sinn Fein, friend of Michael Collins and first presi- dent of the Irish Free State. It is his part in the pogrom that gives it significance today as we negotiate with Sinn Fein.

The story of the Limerick pogrom (or 'boycott', as it is also known) has a special resonance for me because my grandfather and his family, the Jaffes, lived in Limer- ick then — though they never mentioned it. Indeed, Irish Jewry, including its most famous son, Chaim Herzog, late President of Israel, had protested that Ireland was the most tolerant land in Europe. Now it appears that they protested too much. The strangest thing of all is that the Jews of today's Ireland are still frightened of telling this story. When I made a television film recently about the pogrom, most Irish Jews were too scared of 'making trouble, attracting attention' to take part in it.

I had always been proud of my Irish roots. My late grandfather, Henry Jaffe, who lost his Irish accent but kept his debonair Irish charm, used to say that he had seen mermaids at Ballybunnion, and Aunt Rose used to reminisce in an Irish brogue about the Limerick races. While talking to a distinguished Irish political writer, I mentioned that I was descended from Limerick Jews. He told me the story which became the basis of my film for Channel 4 about the origins of Sinn Fein.

Virtually the whole Jewish community in Limerick, numbering about 170, were from the village of Akmene in the Tsar's Baltic territories which are now Lithuania — part of the Pale of Settlement, the only area where Jews were allowed to live. When in the 1880s Nicholas II stepped up his anti- Jewish legislation, my great-great-grandfa- ther Benjamin Jaffe and most of Akmene decided to leave before the Cossacks returned. Benjamin bought a ticket for New York, but when he arrived at the pic- turesque imperial British port of Queen- stown in southern Ireland (now called Cobh, whence the Titanic departed on its final voyage), he was told that he had arrived in the New World. 'But that doesn't look like New York,' the Jews protested as they disembarked. 'New York's the next parish,' they were told. When they discov- ered this was not the case, they settled in Limerick.

They lived together in considerable poverty in Calooney Street, which soon became known as Little Jerusalem. In the 1901 census, four years before the pogrom, my maternal family were registered as ped- lars. The patriarch, Benjamin, a magnifi- cent man with a long white beard, was a pedlar, though really he was the chazan (singer) and mohel (circumciser) of the lit- tle community. He lived at 64 Calooney Street and his son Max, aged 26, lived at Number 31 with his own family, which included my grandfather Henry, aged three, and my great-aunt Rose, aged one.

The family has always been proud that Max was a dentist, but I soon discovered that he was not technically qualified; the census called him, alarmingly, 'dental mechanic'. It comments drily that the fami- ly could read and write. They must have been the most erudite pedlars who ever existed, for they were as scholarly as they were poor. My grandfather's bar mitzvah speech is written in both English and in flu- ent ancient Hebrew, and filled with biblical references.

However hard it was to do business in Limerick, it seemed a safer sanctuary than Russia. But three years after the census, when my grandfather was six, hatred of this tiny Jewish community reached fever pitch amongst the very poor Irish to whom they sold their wares. They often sold on credit, and this caused savage resentment. Some- times when a Jew went to the surrounding countryside to collect a debt, peasant women would pull out their breasts, shout 'Rape!' and then the men would beat up the Jew. An ostentatious Jewish wedding apparently caused jealousy. The pogrom was the result of the Increasingly vicious agitation of the spiritu- al director of Limerick's Redemptionist Order, Father John Creagh, whose church Overshadowed Little Jerusalem. The cli- max came when Creagh, 'a speaker of fer- vid eloquence', gave his sermon entitled 'How the Israelites trade', on Monday 11 January 1904. It reads like a grotesque Parody of anti-Semitism:

The Jews rejected Jesus, they crucified Him and called down the curse of His precious blood on their own heads... they did not hesitate to shed Christian blood. Nowadays they dare not kidnap and slay Christian chil- dren, but they will not hesitate to expose them to a longer and more cruel martyrdom by taking the clothes off their backs and the bit out of their mouths.

Then Creagh came to the Jews of Limerick:

Twenty years ago and less, Jews were known only by name and evil repute in Limerick. They were sucking the blood of other nations but those nations turned them out. And they come to our land to fasten themselves like leeches. Their rags have been exchanged for silk. They have wormed themselves into every business...the furniture trade, the milk trade, the drapery trade — and they have even traded under Irish names... The vic- tims of the Jews are mostly women... the Jew has a sweet tongue when he wishes... If you want an example, look to France. What is at present going on in that land?

The reference to the Dreyfus scandal is significant.

The injustice of it was little consolation to the Jews of Calooney Street when the thousand or so worshippers of Creagh's church poured out, as they were to do daily for a month. A huge drunken mob gathered, wielding burning torches. They worked their way down Calooney Street smashing windows and front doors, and forcing their way into the houses which they then looted. For more than a month the Jews of Limerick waited, terrified in their own homes, almost starving, for Father Creagh had urged the people not to pay their debts. No one would do busi- ness with them. If they walked in the streets they were beaten. The only miracle was that no one lost his life, but for the Jews who had just escaped the Cossacks it was terrifying.

The police did very little at first. Only 14-year-old John Raleigh was arrested for stoning Rabbi Levin. But Raleigh was greeted after his one-month sentence by a mob that carried him on their shoulders. And the mayor and corporation of Limer- ick shamefully met to support Raleigh and Father Creagh.

The reaction in Dublin and London was confused. Michael Davitt, who represent- ed the liberal and tolerant Irish tradition which is more familiar to us, wrote at once a letter of powerful outrage, attacking Creagh. But Creagh replied with sermons of hysterical anti-Semitism. John Red- mond, The Irish leader in the Commons, weakly criticised the pogrom. The belea- guered Rabbi Levin bravely defied the mob. Soon the disturbances were raised in Parliament, where the Chief Secretary of Ireland, George Wyndham, languidly promised to protect the Limerick Jews. The Board of Deputies of British Jews managed to get the lay leader of British Catholics, the Duke of Norfolk, to inter- vene.

Bishop Dwyer of Limerick clearly sup- ported Creagh, but an important journalist in Dublin encouraged Creagh's mob from the beginning, giving it intellectual and political legitimacy. Arthur Griffith claimed the boycott was only directed against the trading methods of the Jews, that the refer- ence to ritual murder was taken out of con- text and that Creagh's object was noble. He described the Jews as 'hideous. . . wild, sav- age, filthy forms. . . strange people, alien to us in thought.' Griffith linked Limerick, Dreyfus and the South African Jews together to show that internationally they were evil. It was Griffith who propagated the vision of a Catholic Gaelic Irish race that could not include Jewish aliens — nor, by implication, Protestants. This was the ideology he brought to Sinn Fein. This was what Ourselves Alone meant to its founder. It has a strong bearing on the true philosophy of Sinn Fein today. Gerry Adams refused to discuss the founder of Sinn Fein with me.

Father Creagh left in honour in 1906 with his confraternity still acclaiming 'his indomitable efforts to rescue the working classes of Limerick from the grasp of for- eigners'. In his next mission, to the South Seas, he notoriously ill-treated native pop- ulations. But 60 years later, after the whole story was suddenly told in an angry contro- versy in Limerick, the City of Limerick and the Redemptionist Order made peace with their history, Limerick City agreeing to maintain the small Jewish cemetery in atonement. The story has a melancholy end — Limerick's Jewish community was broken. The families sent their children to England or moved to Dublin. My grandfa- ther went to live in Manchester. Now there is only one Jew in Limerick — and when Stuart Klein moved there in 1957, his Dublin friends were afraid for his life.

When my great-great-grandfather, old Chazan Benjamin Jaffe, died in 1915, his Jewish Chronicle obituary said bitter-sweet- ly that, during Father Creagh's pogrom, 'It was heard on all sides that if all the Jews in Ireland were of the type of Benjamin Jaffe, nothing but respect would be felt for them.'

The author writes for the Sunday Times. Witness: A Great Hatred will be shown on Channel 4 on 15 October at 9 p.m.