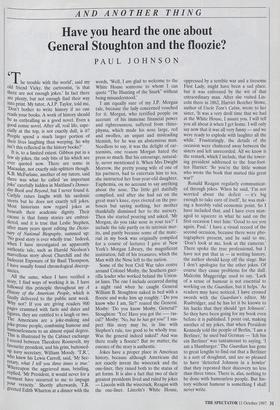 Have you heard the one about General Stoughton and the floozie?

'7Fhe trouble with the world', said my Old friend Vicky, the cartoonist, 'is that there are not enough jokes.' In fact there are plenty, but not enough find their way into print. My tutor, A.J.P. Taylor, told me, 'Don't bother to write history if no one reads your books. A work of history should be as enthralling as a good novel. Even a good comic novel. After all, real life, espe- cially at the top, is not exactly dull, is it? People spend a much larger portion of their lives laughing than weeping. So why isn't this reflected in the history books?'

It is, to a limited extent. Gibbon put in a few sly jokes, the only bits of his which are ever quoted now. There are some in Macaulay, not exactly side-splitters though. K.B. McFarlane, another of my tutors, said there was what he called 'an important Joke' carefully hidden in Maitland's Domes- day Book and Beyond, but I never found it. Carlyle raises laughs with his sardonic snorts but he does not exactly tell jokes. Most historians now regard jokes as beneath their academic dignity. Their excuse is that funny stories are embroi- dered, and it is true that Leslie Stephen, after many years spent editing the Dictio- ?at)/ of National Biography, summed up: No good story is ever wholly true.' Indeed, When I have investigated an apparently authentic tale, such as Harold Nicolson's marvellous story about Churchill and the Indecent Exposure of Sir Basil Thompson, I have usually found chronological discrep- ancies.

All the same, when I have verified a story, I find ways of working it in. I have followed this principle throughout my A 1-1.istoty of the American People, which is finally delivered to the public next week. Why not? If you are giving readers 900 Pages crammed with facts and dates and figures, they are entitled to a laugh or two. The e Americans are a joke-making and Joke-prone people, combining humour and humourlessness to an almost equal degree. This is illustrated by the Cabinet exchange I record between Theodore Roosevelt, my favourite president, and his grim, buttoned- UP navy secretary, William Moody. `T.R.', Who knew his Lewis Carroll, said, 'Mr Sec- retary, what I tell you three times is true.' Whereupon the aggrieved man, bristling, replied, `Mr President, it would never for a moment have occurred to me to impugn Your veracity.' Shortly afterwards, T.R. greeted Edith Wharton at a dinner with the words, 'Well, I am glad to welcome to the White House someone to whom I can quote "The Hunting of the Snark" without being misunderstood.' I am equally sure of my J.P. Morgan tale, because the lady concerned vouched for it. Morgan, who terrified people on account of his immense financial power and righteousness, suffered from rhino- phyma, which made his nose large, red and swollen, an unjust and misleading blemish, for he was an abstemious man. Needless to say, it was the delight of car- toonists, one reason Morgan hated the press so much. But his entourage, natural- ly, never mentioned it. When Mrs Dwight Morrow, the pretty young wife of one of his partners, had to entertain him to tea, she instructed her four-year-old daughter, Euphemia, on no account to say anything about the nose. The little girl dutifully complied, and after she had sat on the great man's knee, eyes riveted on the pro- boscis but saying nothing, her mother thankfully dismissed her to the nursery. Then she started pouring and asked, `Mr Morgan, do you take nose in your tea?' I include the tale partly on its intrinsic mer- its, and partly because some of the mate- rial in my book was originally compiled for a course of lectures I gave at New York's Morgan Library, the magnificent institution, full of his treasures, which the Man with the Nose left to the nation.

Some of the best Civil War tales centre around Colonel Mosby, the Southern guer- rilla leader who worked behind the Union- ist lines. The one I include occurred during a night raid when he caught General William B. Stoughton naked in bed with a floozie and woke him up roughly. Do you know who I am, Sir?' roared the General. Mosby: `Do you know Mosby, General?' Stoughton: 'Yes! Have you got the — ras- cal?' Mosby: 'No, but he has got you!' I sus- pect this story may be, in line with Stephen's rule, too good to be wholly true. Was the general indeed naked? And was there really a floozie? But no matter, the essence of the story is authentic.

Jokes have a proper place in American history, because although Americans did not exactly invent the wisecrack and the one-liner, they raised both to the status of art forms. It is also a fact that two of their greatest presidents lived and ruled by jokes — Lincoln with the wisecrack, Reagan with the one-liner, Lincoln's White House, oppressed by a terrible war and a tiresome First Lady, might have been a sad place, but it was enlivened by the wit of that extraordinary man. After she visited Lin- coln there in 1862, Harriet Beecher Stowe, author of Uncle Tom's Cabin, wrote to her sister, 'It was a very droll time that we had at the White House, I assure you. I will tell you all about it when I get home. I will only say now that it was all very funny — and we were ready to explode with laughter all the while.' Frustratingly, the details of the occasion were chattered away between the sisters and left unrecorded. All we know is the remark, which I include, that the tower- ing president addressed to the four-foot- ten Harriet: `So you're the little woman who wrote the book that started this great war?'

Ronald Reagan regularly communicat- ed through jokes. When he said, 'I'm not worried about the deficit — it's big enough to take care of itself', he was mak- ing a horribly valid economic point. So I have included that, and I have even man- aged to squeeze in what he said on the first occasion I met him: 'Good to see you again, Paul.' I have a visual record of the second occasion, because there were pho- tographers present, and he said to me, 'Don't look at me, look at the cameras.' There spoke the true professional, but I have not put that in — in writing history, the author should keep off the stage. But I don't apologise for the other jokes. Of course they cause problems for the dull. Malcolm Muggeridge used to say, 'Lack of a sense of humour is not essential to working on the Guardian, but it helps.' As readers may have noticed, I have crossed swords with the Guardian's editor, Mr Rusbridger, and he has let it be knoWn to his hacks that they should 'get Johnson'. So they have been going for my book even before it is published. I point out, making another of my jokes, that when President Kennedy told the people of Berlin, 'I am a Berliner,' he used bad German — 'Ich bin em n Berliner' was tantamount to saying, 'I am a Hamburger.' The Guardian has gone to great lengths to find out that a Berliner is a sort of doughnut, and are so pleased to have 'detected Johnson in a howler' that they repeated their discovery no less than three times. There is, alas, nothing to be done with humourless people. But his- tory without humour is something I shall never write.