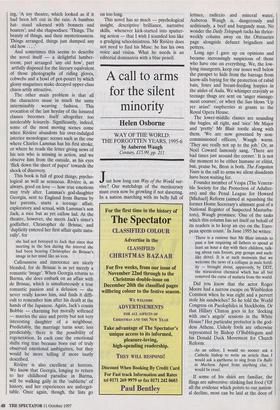 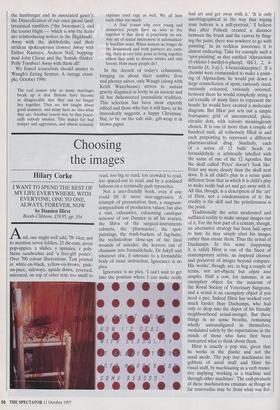 A call to arms for the silent minority

WAY OF THE WORLD: THE FORGOTTEN YEARS, 1995-6 by Auberon Waugh Century, £15.99, pp. 211 Just how long can Way of the World sur- vive? Our watchdogs of the meritocracy must even now be growling if not slavering. In a nation marching with its belly full of lettuce, radiccio and mineral water, Auberon Waugh is, dangerously and seditiously, a beef and burgundy man. No wonder the Daily Telegraph tucks his thrice- weekly column away on the Obituaries page alongside defunct brigadiers and potters.

Long ago I gave up on opinions and became increasingly suspicious of those who have one on everything. We, the low- lying insurgents, keep our noses well below the parapet to hide from the barrage from know-ails baying for the protection of rabid bats, foxes and breast-feeding harpies in the aisles of Asda. We whimper cravenly as teenage thugs are sent on 'anger manage- ment courses', or when the Sun blows 'Up yer arias!' raspberries at grants to the Royal Opera House.

The lower-middle classes are sounding the bugles, all right, and 'nice' Ms Major and 'pretty' Mr Blair tootle along with them. 'We are now governed by non- commissioned officers,' Waugh warns. 'They are really not up to the job.' Or, as Noel Coward famously sang, 'There are bad times just around the corner.' It is not the moment to be either humane or elitist, but, praise be, Bron is both. The Forgotten Years is the call to arms we silent dissidents have been waiting for.

Founder member of Vespa (The Venera- ble Society for the Protection of Adulter- ers) and the Penal League for Howard [Michael] Reform (aimed at squashing the former Home Secretary's ultimate goal of a National Register of Suspected Masturba- tors), Waugh promises: 'One of the tasks which this column has set itself on behalf of its readers is to keep an eye on the Euro- pean sperm count.' In June 1995 he writes:

There is a rumour that Mr Blair intends to pass a law requiring all fathers to spend at least an hour a day with their children, talk- ing about rain forests, pop groups and such- like drivel. It is at such moments that we welcome the news of a collapse in male fertil- ity — brought about, apparently, by DDT, the miraculous chemical which has all but removed the curse of malaria from the world.

Did you know that the actor Roger Moore had a narrow escape on Wimbledon Common when he was eight and a pervert stole his sandwiches? So he told the World Congress on Paedophiles in Stockholm. Or that Hillary Clinton goes in for 'docking with one's angels' sessions in the White House? Her particular protector is the god- dess Athene. Unholy fools are otherwise represented by Bishop O'Bubblegum and his Donald Duck Movement for Church Reform: As an editor, I would no sooner ask a Catholic bishop to write an article than I would ask a c,arthorse to sing from Un Ballo in Machera. Apart from anything else, it would be cruel.

If some of his shies are familiar, the flings are subversive: stinking fast food (`Of all the evidence which points to our nation- al decline, most can be laid at the door of the hamburger and its associated gases'); the Disneyfication of our once proud land; tyrannical ramblers (`the Swarmists'); and the tourist blight — 'which is why the Scots are reintroducing wolves in the Highlands'. Away with the shibboleths and their strident spokesperson clowns! Away with Esther Rantzen, Andrew Neil, bopping- mad John Cleese and the 'female thinker' Polly Toynbee! Away with them all!

The real reason why so many marriages break up is that Britons have become so disagreeable that they can no longer live together. They are not taught about good manners, and many have no idea what they are. Another reason may be that practi- cally nobody smokes. This makes for bad temper and aggression, and almost certainly explains road rage as well. We all hate each other too much.

A final reason why even young and unmarried people have no wish to live together is that there is practically no sex. Any act of sexual intercourse is automatical- ly headline news. When women no longer do the housework and both partners are earn- ing, there is very little point in living together unless they wish to discuss whales and rain forests. How many people do?

In the drench of today's columnists, banging on about their sombre lives and phoney salves, only Waugh (along with Keith Waterhouse) strives to sustain gravity disguised as levity in an ancient and all but dishonoured journalistic tradition. This selection has been most expertly edited and those who buy it will have, as he immodestly suggests, a happy Christmas. But, to be on the safe side, gift-wrap it in brown paper.