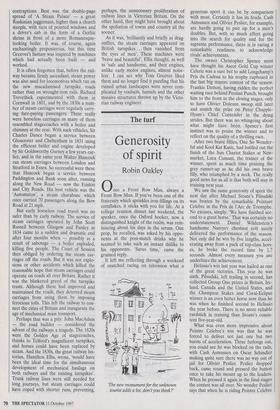 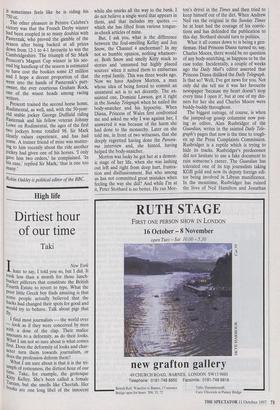 Once a Front Row Man, always a Front Row Man. If you've been one of the fraternity which sprinkles iron fillings on its cornflakes, it sticks with you for life. At a college reunion dinner last weekend, the speaker, once the Oxford hooker, now a distinguished knight of the realm, was rem- iniscing about his days in the scrum. One prop, he recalled, was asked by his oppo- nents at the post-match drinks why he seemed to take such an instant dislike to his opponents. 'Saves time,' came the grunted reply.

It left me reflecting through a weekend of snatched racing on television what a The new monument for the unknown tourist adds a lot, don't you think?' generous sport it can be by comparison with most. Certainly it has its feuds. Cash Asmussen and Olivier Peslier, for example, are hardly going to pair up for a men's doubles. But, with so much effort going into the search for quality and for the supreme performance, there is in racing a remarkable readiness to acknowledge rivals' achievements.

The owner Christopher Spence must have thought his Ascot Gold Cup winner Celeric was a sure bet to add Longchamp's Prix du Cadran to his trophy cupboard in the last big stayers contest of the season. Frankie Dettori, having ridden the perfect waiting race behind Persian Punch, brought him to the front in the closing stages, only to have Olivier Doleuze swoop still later and snatch the prize on Peter Chapple- Hyam's Chief Contender in the dying strides. But there was no whingeing about what might have been. Spence's first instinct was to praise the winner and to reflect on the quality of a thrilling race.

After two brave fillies, One So Wonder- ful and Kool Kat Katie, had battled out the finish of the Sun Chariot Stakes at New- market, Luca Cumani, the trainer of the winner, spent as much time praising the grey runner-up as he did his own brave filly, who triumphed by a neck. The really good news for us all is that both will stay in training next year.

We saw the same generosity of spirit the next day after Michael Stoute's Pilsudski was beaten by the remarkable Peinture Celebre in the Prix de l'Arc de Triomphe. No excuses, simply: 'We have finished sec- ond to a great horse.' That was certainly no understatement. Daniel Wildenstein's handsome Nureyev chestnut colt surely delivered the performance of the season. Not only did he win by five lengths, accel- erating away from a pack of top-class hors- es, he broke the record time by 1.7 seconds. Almost every measure you use underlines the achievement.

Helissio's win last year was hailed as one of the great victories. This year he was sixth. Pilsudski, left trailing in second, has collected Group One prizes in Britain, Ire- land, Canada and the United States, and the Champion Stakes and Coral-Eclipse winner is an even better horse now than he was when he finished second to Helissio the year before. There is no more reliable yardstick in training than Stoute's consis- tent five-year-old.

What was even more impressive about Peintre Cdebre's win was that he was forced to deliver not just one but two bursts of acceleration. Three furlongs out, you could see he was blocked on the rails, with Cash Asmussen on Oscar Schindler making quite sure there was no way out of jail for Olivier Peslier. Peslier dropped back, came round and pressed the button once to take his mount up to the leaders. When he pressed it again in the final stages the contest was all over. No wonder Peslier says that when he is riding Peintre Celebre It sometimes feels like he is riding his 750 cc.

The other pleasure in Peintre Celebre's vietou— was that the French Derby winner had been coupled in so many doubles with Pasternak, who proved the gamble of the season after being backed at all prices do vvn from 12-1 to 4-1 favourite to win the Cambridgeshire. The triumph of Sir Mark Prescott's Magnet Cup winner in his sec- ond big handicap of the season is estimated to have cost the bookies some £5 million and I hope a decent proportion of that went into the hands of Pasternak's part- owner, the ever courteous Graham Rock, one of the wisest heads among racing writers.

Prescott trained the second horse home, Rudimental, as well, and, with the 50-year- old stable jockey George Duffield riding Pasternak and his fellow veteran Johnny Lowe on Rudimental, the ages of the first two jockeys home totalled 98. Sir Mark clearly values experience, and has had 1:itne. A trainer friend of mine was mutter- lug to him recently about the ride another Jockey had given one of his horses. 'I only gave him two orders,' he complained. 'In his case,' replied Sir Mark, 'that is one too many., Robin Oakley is political editor of the BBC.