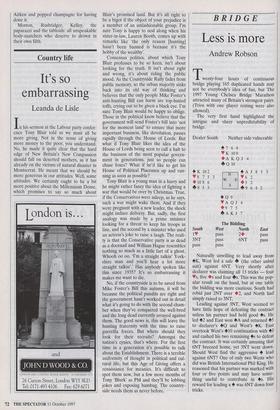 n his sermon at the Labour party confer- ence Tony Blair told us we must all be more giving. Not in the sense of giving more money to the poor, you understand. No, he made it quite clear that the hard edge of New Britain's New Compassion should fall on deserted mothers, as it has already on the victims of natural disaster in Montserrat. He meant that we should be more generous in our attitudes. Well, some attitudes. We certainly ought to be a bit more positive about the Millennium Dome, which promises to say so much about Blair's promised land. But it's all right to be a bigot if the object of your prejudice is a member of an unfashionable group. I'm sure Tony is happy to nod along when his sister-in-law, Lauren Booth, comes up with remarks like 'the only reason [hunting] hasn't been banned is because it's the hobby of the wealthy'.

Consensus politics, about which Tony Blair professes to be so keen, isn't about looking for the truth. It isn't about right and wrong, it's about riding the public mood. As the Countryside Rally fades from public memory, so the urban majority sinks back into its old way of thinking and believes that the only people Mike Foster's anti-hunting Bill can harm are top-hatted toffs, crying out to be given a black eye. I'm sure Tony Blair would be happy to oblige. Those in the political know believe that the government will send Foster's bill into 'not for the moment land' to ensure that more important business, like devolution, passes rapidly through the House of Lords. But what if Tony Blair likes the idea of the House of Lords being seen to call a halt to the business of the most popular govern- ment in generations, just so people can chase foxes? What if he'd like to get his House of Political Placemen up and run- ning as soon as possible?

Tony Blair is a young man in a hurry and he might rather fancy the idea of fighting a war that would be over by Christmas. True, if the Conservatives were asleep, as he says, such a war might wake them. And if they were pregnant with a new leader, the shock might induce delivery. But, sadly, the first analogy was made by a prime minister looking for a threat to keep his troops in line, and the second by a minister who used an actress's joke to raise a laugh. The reali- ty is that the Conservative party is as dead as a doornail and William Hague resembles nothing so much as a little fart of a ghost. Whooh oo oo. 'I'm a straight tallcin' York- shire man and you'll hear a lot more straight talkin'.' Has anybody spoken like this since 1935? It's so embarrassing it makes me want to die.

No, if the countryside is to be saved from Mike Foster's Bill this autumn, it will be because the political pundits are right and the government hasn't worked out in detail what it's going to do with the second cham- ber when they've conquered the well-bred and the long dead currently arrayed against them. The good news is, this will leave the hunting fraternity with the time to raise guerrilla forces. But where should they look for their recruits? Amongst the nation's cynics, that's where. For the first time in a generation it's possible to talk about the Establishment. There is a terrible uniformity of thought in political and cul- tural life, but this Age of Giving offers a renaissance for meanies. It's difficult to spot them now, but a few more months of Tony `Blurk' as PM and they'll be lobbing jokes and exposing humbug. The country- side needs them as never before.