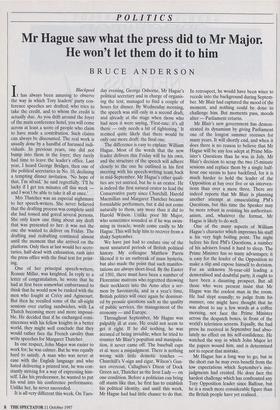 Mr Hague saw what the press did to Mr Major.

He won't let them do it to him

t has always been amusing to observe the way in which Tory leaders' party con- ference speeches are drafted; who tries to take the credit, and to whom the credit is actually due. As you drift around the foyer of the main conference hotel, you will come across at least a score of people who claim to have made a contribution. Such claims can always be discounted. The real work is usually done by a handful of harassed indi- viduals. In previous years, one did not bump into them in the foyer; they rarely had time to leave the leader's office. Last year, I heard George Bridges, then one of the political secretaries in No. 10, declining a tempting dinner invitation. 'No hope of that, I'm afraid,' he said regretfully. 'I'll be lucky if I get ten minutes off this week — and I won't be able to take it all at once.'

Mrs Thatcher was an especial nightmare to her speech-writers. She never believed that the drafting process was complete until she had tossed and gored several persons. She only knew one thing about any draft that was presented to her: it was not the one she wanted to deliver on Friday. The drafting and redrafting continued almost until the moment that she arrived on the platform. Only then at last would her secre- taries, half-dead with exhaustion, rush into the press office with the final text for print- ing.

One of her principal speech-writers, Ronnie Millar, was knighted. In reply to a letter of congratulation, he wrote that he had at first been somewhat embarrassed to think that he would now be ranked with the men who fought at Crecy and Agincourt. But then he recalled some of the all-night sessions over curling sandwiches, with La Thatch becoming more and more impossi- ble. He decided that if he exchanged remi- niscences with his fellow knights in a better world, they might well conclude that they would rather face the French cavalry than write speeches for Margaret Thatcher.

In one respect, John Major was easier to work for; he was calmer. But he was equally hard to satisfy. A man who was never at ease with the English language and who hated delivering a printed text, he was con- stantly striving for a way of expressing him- self. Like his predecessor, he wanted to put his soul into his conference performance. Unlike her, he never succeeded.

It is all very different this week. On Tues- day evening, George Osborne, Mr Hague's political secretary and in charge of organis- ing the text, managed to find a couple of hours for dinner. By Wednesday morning, the speech was still only in a second draft, and already at the stage when those who had seen it were saying, 'First-rate: it's all there — only needs a bit of tightening.' It seemed quite likely that there would be only one more draft: the final one.

The difference is easy to explain: William Hague. Most of the words that the new leader delivers this Friday will be his own, and the structure of the speech will adhere closely to the one he outlined in his first meeting with his speech-writing team,back in mid-September. Mr Hague's other quali- ties are yet untried, but he is an orator. He is indeed the first natural orator to lead the Conservative party since Churchill. Harold Macmillan and Margaret Thatcher became formidable performers, but it did not come naturally to them, any more than it did to Harold Wilson. Unlike poor Mr Major, who sometimes sounded as if he was swim- ming in treacle, words come easily to Mr Hague. This will help him to recover from a shaky September.

We have just had to endure one of the most unnatural periods of British political history. My colleague Matthew Parris likened it to an outbreak of mass hysteria, but also made the point that such manifes- tations are always short-lived. By the Easter of 1501, there must have been a number of Florentine matrons who regretted throwing their necklaces into the Arno after a ser- mon by Savonarola, and in a year's time, British politics will once again be dominat- ed by prosaic questions such as the quality of public services, the management of the economy — and Europe.

Throughout September, Mr Hague was palpably ill at ease. He could not seem to get it right. If he did nothing, he was accused of being invisible; when he tried to counter Mr Blair's populism and manipula- tion, it never came off. The baseball caps et al. were a misjudgment. There is nothing wrong with little demotic touches — Churchill's V-sign and cigar, Wilson's Gan- nex overcoat, Callaghan's Dixon of Dock Green act, Thatcher as the Iron Lady — on one condition. Before a politician can bring off stunts like that, he first has to establish his political identity, and until this week, Mr Hague had had little chance to do that. In retrospect, he would have been wiser to recede into the background during Septem- ber. Mr Blair had captured the mood of the moment, and nothing could be done to challenge him. But moments pass, moods alter — Parliament returns.

Mr Blair's new government has demon- strated its dynamism by giving Parliament one of the longest summer recesses for many years. It will shortly end, and when it does there is no reason to believe that Mr Hague will be any less adept at Prime Min- ister's Questions than he was in July. Mr Blair's decision to scrap the two 15-minute sessions and replace them by a single half- hour one seems to have backfired, for it is much harder to hold the leader of the Opposition at bay over five or six interven- tions than over a mere three. There are indeed reports that Mr Blair is planning another attempt at emasculating PM's Questions, but this time the Speaker may be more robust in resisting his authoritari- anism, and, whatever the format, Mr Hague is likely to do well.

One of the many aspects of William Hague's character which impresses his staff is his very high boiling point. The night before his first PM's Questions, a number of his advisers found it hard to sleep. The Prime Minister has so many advantages; it is easy for the leader of the Opposition to make a slip and expose himself to derision. For an unknown 36-year-old leading a demoralised and doubtful party, it ought to have been a daunting prospect. But all those who were present insist that Mr Hague was the coolest man in the room. He had slept soundly; to judge from his manner, one might have thought that he was about to say a few words at a coffee morning, not face the Prime Minister across the despatch boxes, in front of the world's television screens. Equally, the bad press he received in September had abso- lutely no effect on his self-confidence. He watched the way in which John Major let the papers wound him, and is determined not to repeat that mistake.

Mr Hague has a long way to go, but in the short run he may even benefit from the low expectations which September's mis- judgments had created. He does face the hardest challenge which has confronted any Tory Opposition leader since Balfour, but he is a much more considerable figure than the British people have yet realised.