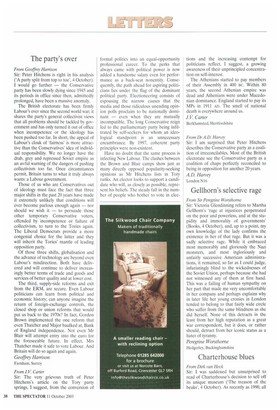 From Sir Peregrine Worsthorne Sir: Victoria Glendinning refers to Martha Gellhorri's 'rage at injustices perpetrated on the poor and powerless, and at the stupidity and immorality of governments' (Books, 4 October), and, up to a point, my own knowledge of the lady confirms the existence in her of that rage. But it was a sadly selective rage. While it embraced most memorably and gloriously the Nazi monsters, and most ingloriously and unfairly successive American administrations, it remained, so far as I could judge, infuriatingly blind to the wickednesses of the Soviet Union, perhaps because she had not witnessed any of them at first hand. This was a failing of human sympathy on her part that made me very uncomfortable in her company and perhaps explains why in later life her young cronies in London tended to belong to that fairly wide circle who suffer from the same blindness as she did herself. None of this detracts in the least from her high reputation as a great war correspondent, but it does, or rather should, detract from her iconic status as a hater of tyranny.