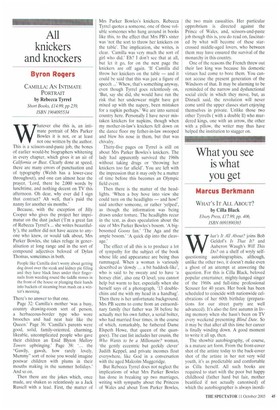 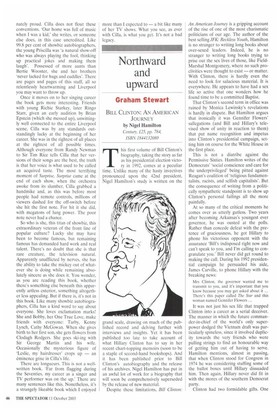 What you see is what you get

WHAT'S IT ALL ABOUT? by Cilia Black Ebury Press, fl 7.99, pp. 406, ISBN 0091890365 \AT hat's It All About? joins Bob Geldof's Is That It? and Auberon Waugh's Will This Do? on a shelf of wryly self questioning autobiographies, although, unlike the other two, it doesn't make even a ghost of an attempt at answering the question. For this is Cilia Black, beloved popular entertainer, mighty-lunged singer of the 1960s and full-time professional Scouser for 40 years. Her book has been scheduled to coincide with nationwide celebrations of her 60th birthday (preparations for our street party are well advanced). It's also the first autumn in living memory when she hasn't been on TV every weekend presenting Blind Date. So it may be that after all this time her career is finally winding down. A good moment to write it all up, then.

The showbiz autobiography, of course, is a mature art form. From the front-cover shot of the artiste today to the back-cover shot of the artiste in her not very wild youth, it's as predictable and comfortable as Cilia herself. All such books are required to start with the poor but happy childhood (father hard but fair, mother beatified if not actually canonised) of which the autobiographer is always inordi nately proud. Cilia does not flout these conventions. 'Our home was full of music when I was a kid,' she writes, or someone else does, in this case uncredited. Like 99.8 per cent of showbiz autobiographers, the young Priscilla was 'a natural show-off who was always playing the fool, thinking up practical jokes and making them laugh'. Possessed of more aunts than Bertie Wooster, she and her brothers 'never lacked for hugs and cuddles'. There are pages and pages of this stuff, all so relentlessly heartwarming and Liverpool you may want to throw up.

Once it moves on to her singing career the book gets more interesting. Friends with young Richie Starkey, later Ringo Starr, given an early audition by Brian Epstein (which she messed up), unwittingly well connected to the entire Liverpool scene, Cilia was by any standards outstandingly lucky at the beginning of her career. She was in the rightest of all places at the rightest of all possible times. Although everyone from Randy Newman to Sir Tim Rice tells Cilia that her versions of their songs are the best, the truth is that her voice is what used to be called an acquired taste. The most terrifying moment of Surprise, Surprise came at the end of each show, when the orchestra awoke from its slumber, Cilla grabbed a handmike and, as this was before most people had remote controls, millions of viewers dashed for the off-switch before she hit the first note. For hit it she did, with megatons of lung power. The poor note never had a chance.

So who is she, this titan of showbiz, this extraordinary veteran of the front line of popular culture? Lucky she may have been to become famous, but remaining famous has demanded hard work and real talent. There's no doubt that she is that rare creature, the television natural. Apparently unafflicted by nerves, she has the ability to take the mickey out of whatever she is doing while remaining absolutely sincere as she does it. You wonder, as you are reading this book, whether there's something else beneath this apparently artless exterior, something altogether less appealing. But if there is, it's not in this book. Like many showbiz autobiographers, Cilia has a kind word to say about everyone. She loves exclamation marks! She and Bobby, her One True Love, make friends with everyone: Tarby, Kenny Lynch, Cathy McGowan. When she gives birth to her first son, she gets flowers from Clodagh Rodgers. She goes ski-ing with Sir George Martin and his wife. Occasionally the mysterious figure of 'Leslie, my hairdresser' crops up — an eminence grise in Cilia's life.

There are longueurs. This is not a wellwritten book. 'Far from flagging during the Seventies, my career as a singer and TV performer was on the up.' There are many sentences like this. Nonetheless, it's a strangely likeable book which I enjoyed more than I expected to — a bit like many of her TV shows. What you see, as ever with Cilia, is what you get. It's not a bad legacy.