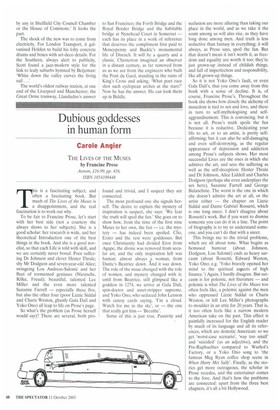 THE LIVES OF THE MUSES by Francine Prose Aunan,f16.99, pp. 416, ISBN 1854109448 This is a fascinating subject, and often a fascinating book. But much of The Lives of the Muses is a disappointment, and the real fascination is to work out why.

To be fair to Francine Prose, let's start with her best side (not a courtesy she always shows to her subjects). She is a good scholar: her research is wide, and her theoretical Introduction one of the best things in the book. And she is a good novelist, so that each Life is told with skill, and we are certainly never bored. Poor suffering Dr Johnson and clever Hester Thrale; shy Mr Dodgson and seven-year-old Alice; swingeing Lou Andreas-Salome and her fleet of tormented geniuses (Nietzsche, Rilke, Freud); beautiful, talented Lee Miller and the even more talented Suzanne Farrell — especially these five, but also the other four (poor Lizzie Siddal and Charis Weston, ghastly Gala Dali and Yoko Ono) all leap to life on Prose's page.

So what's the problem (as Prose herself would say)? There are several, both pro found and trivial, and I suspect they are connected.

The most profound one she signals herself. The desire to explain the mystery of inspiration is suspect, she says: 'We fear the truth will spoil the fun.' She goes on to show how, from the time of the first nine Muses to her own, the fun — i.e. the mystery — has indeed been spoiled. Clio, Erato and the rest were goddesses. But once Christianity had divided Eros from Agape, the divine was removed from secular art, and the only inspiration left was human: almost always a woman, from Dante's Beatrice down. And it was down. The role of the muse changed with the role of women, and mystery changed with it; until from Beatrice, still glimpsed like a goddess in 1274, we arrive at Gala Dali, spin-doctor and asset-stripper supreme, and Yoko Ono, who seduced John Lennon with cutesy cards saying, 'I'm a cloud. Watch for me in the sky', or — the one that really got him — 'Breathe-.

Some of this is just true. Passivity and

seclusion are more alluring than taking our place in the world, and as we take it the scum among us will also rise, as they have long done among men. And truth is less seductive than fantasy in everything; it will always, as Prose says, spoil the fun. But that doesn't mean it isn't worth it, as freedom and equality are worth it too; they're just grown-up instead of childish things, and full of imperfection and responsibility, like all grown-up things.

So it is not Yoko Ono's fault, or even Gala Dali's, that you come away from this book with a sense of decline. It is, of course, Francine Prose's. Throughout the book she shows how closely the alchemy of musedom is tied to sex and love, and these in turn to self-mythologising and selfaggrandisement. This is convincing, but it is not all. Prose's truth spoils the fun because it is reductive. Dedicating your life to art, or to an artist, is pretty selfaffirming; but it can also be self-damaging and even self-destroying, as the regular appearance of depression and addiction among Prose's subjects shows. Her most successful Lives are the ones in which she admires the art, and sees the suffering as well as the self-deception: Hester Thrale and Dr Johnson, Alice Liddell and Charles Dodgson (perhaps she even underplays the sex here), Suzanne Farrell and George Balanchirie. The worst is the one in which she doesn't admire the art at all, or the artist either — the chapter on Lizzie Siddal and Dante Gabriel Rossetti, which is one long sneer. I don't disagree about Rossetti's work. But if you want to dismiss someone you can do it in a line. The point of biography is to try to understand someone, and you can't do that with a sneer.

This brings me to the trivial problems, which are all about tone. What begins as bemused humour (about Johnson, Dodgson, Lou Salome) ends as heavy sarcasm (about Rossetti, Edward Weston, Yoko Ono; e.g. 'Yoko bravely opened her mind to the spiritual aspects of high finance.') Again, I hardly disagree. But sarcasm is for polemic, not literature — and polemic is what The Lives of the Muses too often feels like, a polemic against the men who oppressed Lizzie Siddal or Charis Weston, or left Lee Miller's photographs to moulder in an attic for 20 years. That is, it too often feels like a narrow modern American take on the past. This effect is painfully increased for the English reader by much of its language and all its references, which are demotic American: so we get 'worst-ease scenario', 'way too small' and `suieided' (as an adjective), and the Pre-Raphaelites compared to Warhol's Factory, or a Yoko Ono song to 'the famous Meg Ryan coffee shop scene in When Harry Met Sally'. Finally, as the stories get more outrageous, the scholar in Prose recedes, and the entertainer comes to the fore. And that's how the problems are connected: apart from the three best chapters, it's all a bit Hollywood.