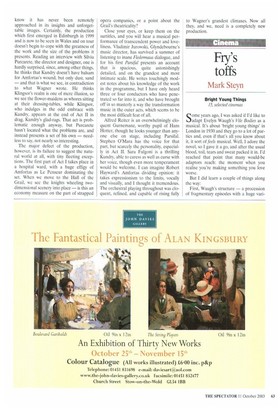 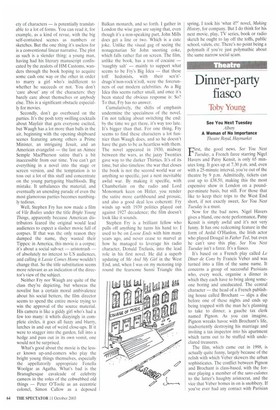 Smeyears ago, I was asked if I'd like to adapt Evelyn Waugh's Vile Bodies as a musical. It's about 'bright young things' in London in 1930 and they go to a lot of parties and, even if that's all you know about it, it sort of feels musical. Well, I adore the novel, so I gave it a go, and after the usual blood, toil, tears and sweat packed it in. I'd reached that point that many would-be adaptors reach: the moment when you realise you're making something you love worse.

But I did learn a couple of things along the way: First, Waugh's structure — a procession of fragmentary episodes with a huge vari ety of characters — is potentially translatable to a lot of forms. You can read it, for example, as a kind of revue, with the big self-contained scenes as numbers or sketches. But the one thing it's useless for is a conventional linear narrative. The plot as such is a slender thing: a young man, having had his literary manuscript confiscated by the zealots of HM Customs, wanders through the book hoping to acquire some cash one way or the other in order to marry a girl who's indifferent to whether he succeeds or not. You don't 'care about' any of the characters: they barely care about themselves or anybody else. This is a significant obstacle especially for movies.

Secondly, don't go overboard on the parties. It's the posh totty swilling cocktails about Mayfair that gets everyone excited, but Waugh has a lot more than balls in the air, beginning with the opening shipboard scenes featuring among others a Prime Minister, an intriguing Jesuit, and an American evangelist — the last an Aimee Semple MacPherson satire that's a bit inaccessible from our time. You can't get everything in a novel into the stage or screen version, and the temptation is to toss out a lot of this stuff and concentrate on the young partygoing bluebloods. Big mistake. It unbalances the material, and eventually an unending parade of even the most glamorous parties becomes numbingly tedious.

Well, Stephen Fry has now made a film of Vile Bodies under the title Bright Young Things, apparently because American distributors feared the original would lead audiences to expect a slasher movie full of corpses. If that was the only reason they dumped the name, they wasted their Tippex: in America, this movie is a corpse; it's about a social sub-set — aristotrash — of absolutely no interest to US audiences, and calling it Lassie Comes Home wouldn't change that. So the title substitution seems more relevant as an indication of the director's view of the subject.

Neither Fry nor Waugh are quite of the class they're depicting, but whereas the novelist has a certain moral ambivalence about his social betters, the film director seems to spend the entire movie trying to win the approval of the source material. His camera is like a giddy girl who's had a few too many: it whirls dizzyingly in complete circles, it goes all fuzzy and blurry, lurches in and out of weird close-ups. If it were to stagger into the garden, fall into a hedge and pass out in its own vomit, one would not be surprised.

What's good about the movie is the lesser known up-and-corners who play the bright young things themselves, especially the appellatorily appropriate Fenella Woolgar as Agatha. What's bad is the Branaghesque cavalcade of celebrity cameos in the roles of the cobwebbed old things — Peter O'Toole as an eccentric colonel, Simon Callow as a deposed Balkan monarch, and so forth. I gather in London the wise guys are saying that, even though it's a non-speaking part, John Mills does get a line or two. Which is a cute joke. Unlike the visual gag of seeing the nonagenarian Sir John snorting coke, which falls rather flat on screen. The film, unlike the book, has a ton of cocaine — 'naughty salt' — mainly to support what seems to be Fry's Big Idea — that these toff hedonists, with their sex'n'drugs'n'non-rock'n'roll, were the forerunners of our modern celebrities. As a Big Idea this seems rather small, and once it's been stated the obvious response is: So? To that, Fry has no answer.

Cumulatively, the shifts of emphasis undermine the specialness of the novel. I'm not talking about switching the end: by the time we get there, it's way too late. It's bigger than that. For one thing, Fry seems to find these characters a lot funnier than Waugh does, and so he doesn't have the guts to be as heartless with them. The novel appeared in 1930, midway between the wars, as the jazzy Twenties gave way to the darker Thirties. It's of its time, but also timeless: the war that closes the book is not the second world war or anything so specific, just a next inevitable awful war. By making it specific, with Chamberlain on the radio and Lord Monomark keen on Hitler, you render the satire more earthbound and prosaic, and also a good deal less coherent: Fry winds up with 1939 politics played out against 1927 decadence; the film doesn't look like it sounds.

Stephen Fry is a brilliant fellow who pulls off anything he turns his hand to: I used to be on Loose Ends with him many years ago, and never cease to marvel at how he managed to leverage his radio character, Donald Trefusis, into the lead role in his first novel. He did a superb updating of Me And My Girl in the West End, and, when I was on my motoring trip round the fearsome Sunni Triangle this spring, I took his 'what if?' novel, Making History, for company. But I do think for his next movie, play, TV series, book or radio sketch he ought to lay off the toffs, public school, valets, etc. There's no point being a polymath if you're just polymathic about the same narrow social seam.