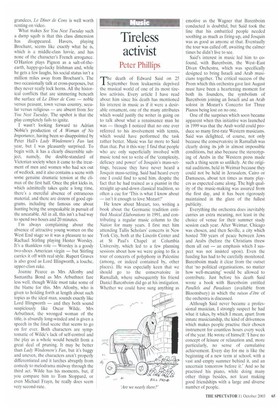 The death of Edward Said on 25 September from leukaemia deprived the musical world of one of its most tireless activists. Every article I have read about him since his death has mentioned his interest in music as if it were a desirable ornament, one of the many attributes which would justify the writer in going on to talk about what a renaissance man he was — though I noticed that no one ever referred to his involvement with tennis, which would have performed the task rather better. Music was far more to Said than that. Put it this way: I find that people who are only superficially involved with music tend not to write of the 'complexity, delicacy and power' of Josquin's mass-settings, because they have never heard a Josquin mass-setting. Said had heard every one I could find to send him, despite the fact that he had trained as a pianist in the straight up-and-down classical tradition, so often a cue for 'This is what I know about — isn't it enough to love Mozart?'

He knew about Mozart, too, writing a book about the Germanic tradition entitled Musical Elaborations in 1991, and contributing a regular music column to the Nation for many years. I first met him attending Tallis Scholars' concerts in New York City, both at the Lincoln Center and at St Paul's Chapel at Columbia University, which led to a few planning sessions about how we were going to fix a tour of concerts of polyphony in Palestine (among, or indeed contained by, other places). He was especially keen that we should go to the conservatoire in Ramallah, where subsequently his friend Daniel Barenboim did go at his instigation. Whether we could have sung anything as

emotive as the Wagner that Barenboim conducted is doubtful, but Said took the line that his embattled people needed soothing as much as firing-up, and Josquin was as good as anyone at that. Eventually the tour was called off, awaiting the calmer times he didn't live to see.

Said's interest in music led him to cofound, with Barenboim, the West–East Divan Orchestra, which was specifically designed to bring Israeli and Arab musicians together. The critical success of the Prom which this orchestra gave last August must have been a heartening moment for both its founders, the symbolism of Barenboim joining an Israeli and an Arab soloist in Mozart's Concerto for Three Pianos being lost on no one, One of the surprises which soon became apparent when this initiative was launched in 1999 was that the Arab world could produce so many first-rate Western musicians. Said was delighted, of course, not only because the conservatoire in Ramallah was clearly doing its job in almost impossible conditions, but also because the stereotyping of Arabs in the Western press made such a thing seem so unlikely. At the original auditions, held in Weimar because they could not be held in Jerusalem, Cairo or Damascus, about ten times as many players as expected came along. The high quality of the music-making was assured from the first day, and it has been rigorously maintained in the glare of the fullest publicity.

Everything the orchestra does inevitably carries an extra meaning, not least in the choice of venue for their summer study session each year. After Weimar, Chicago was chosen, and then Seville, a city which hosted 700 years of peace between Jews and Arabs (before the Christians threw them all out — an emphasis which I suspect was not insisted upon). Even the funding has had to be carefully monitored. Barenboim made it clear from the outset that 'no political organisations, no matter how well-meaning' would be allowed to contribute. Just before his death Said wrote a book with Barenboim entitled Parallels and Paradoxes (available from Bloomsbury) in which the raison d'être of the orchestra is discussed.

Although Said never became a professional musician, I strongly suspect he had what it takes, by which I mean, apart from innate musicianship, the kind of drivenness which makes people practise their chosen instrument for countless hours every week of the year. He wrote of himself: 'I have no concept of leisure or relaxation and, more particularly, no sense of cumulative achievement. Every day for me is like the beginning of a new term at school, with a vast and empty summer behind it, and an uncertain tomorrow before it.' And so he practised his piano, while doing many other things besides, not least making good friendships with a large and diverse number of people.