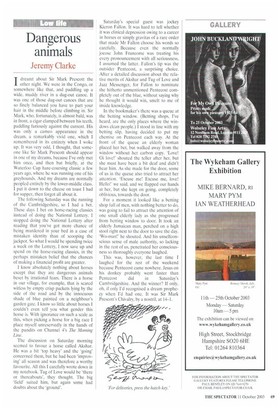 T dreamt about Sir Mark Prescott the 1 other night. We were in the Congo, or somewhere like that, and paddling up a wide, muddy river in a dug-out canoe. It was one of those dug-out canoes that are so finely balanced you have to part your hair in the middle before climbing in. Sir Mark, who, fortunately, is almost bald, was in front, a cigar clamped between his teeth, paddling furiously against the current. His was only a cameo appearance in the dream, a remarkably vivid one, which I remembered in its entirety when I woke up. It was very odd, I thought, that someone like Sir Mark Prescott should appear in one of my dreams, because I've only met him once, and then but briefly, at the Waterloo Cup hare-coursing classic a few years ago, where he was running one of his greyhounds. And my dreams are normally peopled entirely by the lower-middle class. I put it down to the cheese on toast I had for supper, then forgot all about it.

The following Saturday was the running of the Cambridgeshire, so I had a bet. These days I bet on horse-racing classics instead of doing the National Lottery. I stopped doing the National Lottery after reading that you've got more chance of being murdered in your bed in a case of mistaken identity than of scooping the jackpot. So what I would be spending twice a week on the Lottery, I now save up and spend on the horse-racing classics, in the perhaps mistaken belief that the chances of making a financial profit are greater.

I know absolutely nothing about horses except that they are dangerous animals beset by irrational fears. There is a horse in our village, for example, that is scared witless by empty crisp packets lying by the side of the road and by the innocuous shade of blue painted on a neighbour's garden gate. I know so little about horses I couldn't even tell you what gender this horse is. With ignorance on such a scale as this, when picking a horse for a big race I place myself unreservedly in the hands of the pundits on Channel 4's The Morning Line.

The discussion on Saturday morning seemed to favour a horse called Akshar. He was a bit lop heavy' and the 'going' concerned them, but he had been 'improving' all season and was therefore a worthy favourite. All this I carefully wrote down in my notebook. Tug of Love would be 'there or thereabouts', they thought. The big 'field suited him, but again some had doubts about the 'ground'. Saturday's special guest was jockey Kieron Fallon. It was hard to tell whether it was clinical depression owing to a career in horses or simply gravitas of a rare order that made Mr Fallon choose his words so carefully. Because even the normally jocose John Francome was treating his every pronouncement with all seriousness, I assumed the latter. Fallon's tip was the outsider Pentecost, a surprising choice. After a detailed discussion about the relative merits of Akshar and Tug of Love and Jazz Messenger, for Fallon to nominate the hitherto unmentioned Pentecost completely out of the blue, without saying why he thought it would win, smelt to me of inside knowledge.

In the bookmaker's there was a queue at the betting window. (Betting shops, I've heard, are the only places where the windows clean people.) I stood in line with my betting slip, having decided to put my chemise on Pentecost each way. At the front of the queue an elderly woman placed her bet, but walked away from the window without her carbon copy. 'Love! Oi love!' shouted the teller after her, but she must have been a bit deaf and didn't hear him. As she made for the door, some of us in the queue also tried to attract her attention. 'Excuse me! Excuse me, love! Hello!' we said, and we flapped our hands at her, but she kept on going, completely oblivious, towards the door.

For a moment it looked like a betting shop full of men, with nothing better to do, was going to fail to attract the attention of one small elderly lady as she progressed from betting window to door. It took an elderly Jamaican man, perched on a high stool right next to the door to save the day. `Wo-man!' he shouted. And his unselfconscious sense of male authority, so lacking in the rest of us, penetrated her consciousness so thoroughly everyone laughed.

This was, however, the last time I laughed for the rest of the weekend because Pentecost came nowhere. Jesus on his donkey probably went faster than

Pentecost did in Saturday's Cambridgeshire. And the winner? If only, oh, if only I'd recognised a dream prophecy when I'd had one. It was Sir Mark Prescott's Chivalry, by a nostril. at 14-1.