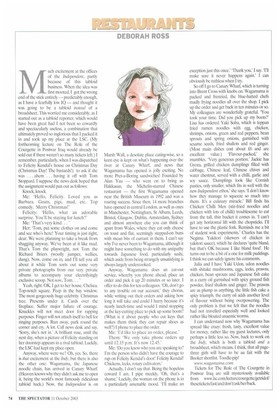 Page 74, 11 October 2003 — M uch excitement at the offices of the Independent, partly because
Close

M uch excitement at the offices of the Independent, partly because

of this tabloid business. When the idea was first mooted, I got the wrong end of the stick entirely — predictably enough, as I have a fearfully low IQ — and thought it was going to be a tabloid instead of a broadsheet. This worried me considerably. as I started out as a tabloid reporter, which would have been great had I not been so cowardly and spectacularly useless, a combination that ultimately proved so inglorious that I packed it in and took up my place at the LSC. (My forthcoming lecture on The Role of the Courgette in Postwar Iraq would already be sold out if there weren't so many tickets left.) I remember, particularly, when I was dispatched to Felicity Kendal's house on Christmas Day (Christmas Day! The bastards!) to ask if she was . . . ahem . . . having it off with Tom Stoppard. I suppose the news desk hoped that the assignment would pan out as follows:

Felicity: 'Hello, what an adorable surprise. You'll be staying for lunch?'

Her: 'Tom, put some clothes on and come and see who's here! Your timing is just right, dear. We were planning to take a break from shagging anyway. We've been at it like mad. That's Tom the playwright, not Tom the Richard Briers (woolly jumper, wellies, dung). Now, come on in, and I'll tell you all about it while Tom sorts out some very private photographs from our very private albums to accompany your electrifyingly exclusive scoop. Not now, Tom.

Yeah, right. OK. I get to her house. Chelsea. Top-notch square. Peep in the bay window. The most gorgeously huge celebrity Christmas tree. Presents under it. Cards over the fireplace. Suffer major failure of courage. Knuckles will not meet door for rapping purposes. Finger will not attach itself to bell for ringing purposes. Run away, park round the corner and cry. A lot. Call news desk and say, 'Sony, she's not in.' A brilliant ruse, until the next day, when a picture of Felicity standing on her doorstep appears in a rival tabloid. Luckily. the LSC had kept my place open.

Anyway, where were we? Oh, yes. So, there is that excitement at the Indy, but there is also the other one: Wagamama, the Japanese noodle chain, has arrived in Canary Wharf. (Heaven knows why they didn't ask me to open it, being the world's most famously ridiculous tabloid hack.) Now, the Independent is on Marsh Wall, a desolate place eating-wise, so a keen eye is kept on what's happening over the river at Canary Wharf, and news that Wagamama has opened is jolly exciting. No more Pret-a-Boring sandwiches! Founded by Alan Yau — who went on to bring us Halckasan, the Michelin-starred Chinese restaurant — the first Wagamama opened near the British Museum in 1992 and was a roaring success. Since then, 14 more branches have opened in central London, as well as ones in Manchester, Nottingham, St Albans, Leeds, Bristol, Glasgow, Dublin, Amsterdam, Sydney and almost anywhere else you can think of apart from Wales, where they eat only cheese on toast and flat, seemingly stepped-on buns with mean bits of currant in them. I can't say why I've never been to Wagamama, although it might have something to do with my antipathy towards Japanese food, particularly sushi, which aside from being strangely unsatisfying is always largely undercooked.

Anyway, Wagamama does an eat-out service, whereby you phone ahead, place an order and pick it up 20 minutes or so later. I offer to do this for ten colleagues. 'Oh, don't go to any trouble on our account,' they chorus, while writing out their orders and asking how long it will take and could I hurry because it's nearly lunch-time and would I mind stopping at the key-cutting place to pick up some hoots? (What is it about people who cut keys that makes them think they can repair shoes as well?) I phone to place the order.

Me: 'Do you know who you are speaking to? I'm the person who didn't have the courage to rap on Felicity Kendal's door! Felicity Kendal! Chickens, leeks, rotary cultivators.'

Actually, I don't say that. Being the hopeless coward I am, I pipe meekly, 'Oh, that's a shame.' Luckily, the woman on the phone is in a particularly amenable mood. 'I'll make an

exception just this once.' 'Thank you,' I say. 'I'll make sure it never happens again.' I can obviously be ruthless when! try.

So off I go to Canary Wharf, which is turning into Brent Cross with knobs on. Wagamama is packed and frenzied, the blue-hatted chefs madly frying noodles all over the shop. I pick up the order and get back in ten minutes or so. My colleagues are wonderfully grateful. 'You took your time. Did you pick up my boots?' Lisa has ordered Yaki Soba, which is teppan fried ramen noodles with egg, chicken, shrimps, onions, green and red peppers, bean sprouts and spring onions, garnished with sesame seeds, fried shallots and red ginger. (Most main dishes cost about £6 and are excellent value.) 'Flavour-packed,' she mumbles. 'Very generous portion.' Jackie has Gyoza, grilled chicken dumplings filled with cabbage, Chinese leaf, Chinese chives and water chestnut, served with a chilli, garlic and soy sauce. 'Dumplings look like Cornish pasties, only smaller, which fits in well with the new Independent ethos,' she says. 'I don't know how they manage to squeeze so much into them. It's a culinary miracle.' Bill finds his Chicken Chilli Men (stir-fried noodles and chicken with lots of chilli) troublesome to eat from the tall, thin bucket it comes in. 'I can't get any horizontal lift with the chopsticks. I'll have to use the plastic fork. Reminds me a bit of student wok experiments.' Charles has the Negima Yakitori (skewers of chicken in yakitori sauce), which he declares 'quite bland, but that's OK because I like bland food'. He turns out to be a bit of a one for milk puddings. I think we can safely ignore his comments.

Julia and I have Yaki Udon, udon noodles with shitake mushrooms, eggs, leeks, prawns, chicken, bean sprouts and Japanese fish cake in a curry oil garnished with spicy ground fish powder, fried shallots and ginger. The prawns are as plump as anything, the little fish cake a spicy triumph, the curly oil adds another level of flavour without being overpowering. The only problem is that we felt that the noodles had not travelled especially well and looked rather like bloated anaemic worms.

I can understand now why Wagamama has spread like crazy: fresh, tasty, excellent value for money, rather like my guest lectures, only perhaps a little less so. Now, back to work on the Indy, which is both a tabloid and a broadsheet, which means, I think, that all pagethree girls will have to be au fait with the Booker shortlist Toodle-pip!

www.wagamama.corn Tickets for The Role of The Courgette in Postwar Iraq are still mysteriously available from www.lsc.coalecture/courgette/getridof/ thesetickets/fastiancliclon't/ask/her/back.