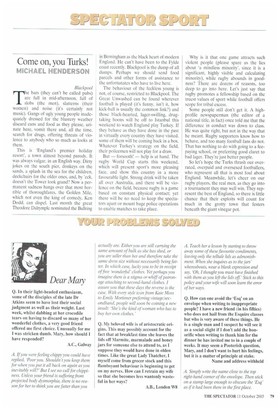 Come on, you Turks!

The bars (they can't be called pubs) are full in mid-afternoon, full of slobs (the men). slatterns (their women) and noise (it's certainly not music). Gangs of ugly young people inadequately dressed for the blustery weather discard cans and food as they please, urinate here, vomit there and, all the time, search for drugs, offering threats of violence to anybody who so much as looks at them.

This is 'England's premier holiday resort', a town almost beyond parody. It was always vulgar, in an English way. Dirty jokes on the south pier, donkeys on the sands, a splash in the sea for the children, deckchairs for the older ones, and, by 'eck, doesn't the Tower look grand? Now a permanent sadness hangs over that most horrible of thoroughfares, the Golden Mile, which not even the king of comedy, Ken Dodd, can dispel. Last month the great Theodore Dalrymple nominated the Bullring in Birmingham as the black heart of modern England. He can't have been to the Fylde coast recently. Blackpool is the dump of all dumps. Perhaps we should send food parcels and other forms of assistance to the unfortunates who have to live here.

The behaviour of the feckless young is not, of course, restricted to Blackpool. The Great Unwashed can be found wherever football is played (it's funny, isn't it, how kick-ball is usually the common link?) and those black-hearted, lager-swilling, drugtaking hoons will be off to Istanbul this weekend to watch England play Turkey. If they behave as they have done in the past in virtually every country they have visited, some of them will be coming back in a box. Whatever Turkey's strategy on the field, their policemen will not play for a draw.

But — forsooth! — help is at hand. The rugby World Cup starts this weekend, which will present sport's more pleasing face. and show this country in a more favourable light. Strong drink will be taken all over Australia, and there will be violence on the field, because rugby is a game based on constant physical contact; yet there will be no need to keep the spectators apart or mount huge police operations to enable matches to take place. Why is it that one game attracts such violent people (please spare us the lies about 'a mindless minority', since it is a significant, highly visible and calculating minority), while rugby abounds in goodness? There are dozens of reasons, too deep to go into here. Let's just say that rugby promotes a fellowship based on the truest values of sport while football offers scope for tribal excess.

Some people still don't get it. A highprofile newspaperman (the editor of a national title, in fact) once told me that the difference in conduct was down to class. He was quite right, but not in the way that he meant. Rugby supporters know how to behave, and too many football fans do not. That has nothing to do with going to a feepaying school, or preferring good claret to bad lager. They're just better people.

So let's hope the Turks thrash our overrated, overpaid and oversexed footballers, who represent all that is most foul about England. Meanwhile, let's cheer on our rugby players, the real men, as they go into a tournament they may well win. They represent the best of England, so there is little chance that their exploits will count for much in the grotty town that festers beneath the giant vinegar pot.