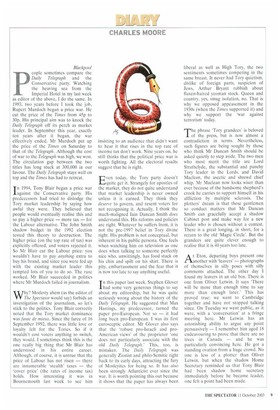 people sometimes compare the Daily Telegraph and the Conservative party. Watching the heaving sea from the Imperial Hotel in my last week as editor of the above, I do the same. In 1993, two years before I took the job, Rupert Murdoch began a price war. He cut the price of the Times from 45p to 30p. His principal aim was to knock the Daily Telegraph off its perch as market leader. In September this year, exactly ten years after it began, the war effectively ended. Mr Murdoch put up the price of the Times on Saturday to that of the Telegraph. Although the cost of war to the Telegraph was high, we won. The circulation gap between the two titles has long stuck at 300,000 in our favour. The Daily Telegraph stays well on top and the Times has had to retreat.

In 1994, Tony Blair began a price war against the Conservative party. His predecessors had tried to dislodge the Tory market leadership by saying how awful they were. They believed that people would eventually realise this and so pay a higher price — more tax — for the Labour alternative. The John Smith shadow budget in the 1992 election tested this theory to destruction. The higher price (on the top rate of tax) was explicitly offered, and voters rejected it. So Mr Blair cut the Labour price: you wouldn't have to pay anything extra to buy his brand, and since you were fed up with the existing market leader this tempted lots of you to do so. The ruse worked, Mr Blair succeeded in politics where Mr Murdoch failed in journalism.

Why? Modesty ahem (as the editor of The Spectator would say) forbids an investigation of the journalism, so let's stick to the politics. Tony Blair correctly noted that the Tory market dominance was faute de mieux. Since the farce of 16 September 1992, there was little love or loyalty felt for the Tories. So if it wouldn't cost voters anything to switch, they would. I sometimes think this is the one really big thing that Mr Blair has understood in his entire career. Although, of course, it is untrue that the price of Labour has not risen — there are innumerable 'stealth' taxes — the 'cover price' (the rates of income tax) holds. How interesting it was in Bournemouth last week to see him

insisting to an audience that didn't want to hear it that rises in the top rate of income tax don't work. Nine years on, he still thinks that the political price war is worth fighting. All the electoral results suggest that he is right.

quite get it. Strangely for apostles of the market, they do not quite understand that market leadership is never owned unless it is earned. They think they deserve to govern, and resent voters for not recognising it. Actually, I think the much-maligned lain Duncan Smith does understand this. His reforms and policies are right. Whatever he suffers from, it is not the pre-1997 belief in Tory divine right. His problem is not conceptual, but inherent in his public persona. One feels when watching him on television as one does when talking to someone perfectly nice who, unwittingly, has food stuck on his chin and spilt on his shirt. There is pity, embarrassment and the fear that it is now too late to say anything useful.

In this paper last week, Stephen Glover lhad some very generous things to say about my editorship, but he was quite seriously wrong about the history of the Daily Telegraph. He suggested that Max Hastings, my predecessor, turned the paper pro-European. Not so — it had long been pro-European. I was its first eurosceptic editor. Mr Glover also says that the 'robust pro-Israeli and proAmerican views' of the proprietor 'one does not particularly associate with the old Daily Telegraph.' This, too, is mistaken. The Daily Telegraph was generally Zionist and philo-Semitic right back to its early days, attracting the fury of Mosleyites for being so. It has also been strongly Atlanticist ever since the war. It is worth pointing this out because it shows that the paper has always been liberal as well as High Tory, the two sentiments sometimes competing in the same breast. It never had Tory quietism, dislike of foreign parts, suspicion of Jews, Arthur Bryant rubbish about flaxen-haired yeoman stock. Queen and country, yes, smug isolation, no, That is why we opposed appeasement in the 1930s (when the Times supported it) and why we support the 'war against terrorism' today.

Thephrase 'Tory grandees' is beloved of the press, but is now almost a contradiction in terms. Nevertheless, such figures are being sought by those who think Mr Duncan Smith should be asked quietly to step aside. The two men who most merit the title are Lord Strathclyde, the substantial and punchy Tory leader in the Lords, and David Maclean, the ascetic and shrewd chief whip. Mr Maclean now looks wiser than ever because of the handsome shepherd's crook he carries to support himself in his affliction by multiple sclerosis. The plotters' dream is that these gentlemen so conduct matters that Mr Duncan Smith can gracefully accept a shadow Cabinet post and make way for a new leader who is chosen without a contest. There is a great longing, in short, for a return to the old 'Magic Circle', But the grandees are quite clever enough to realise that it is 40 years too late.

At Eton, departing boys present one another with 'leavers' — photographs of themselves in silly poses with silly comments attached. The other day I found my leavers in an old box. There is one from Oliver Letwin. It says 'There will be more than enough time to say more than enough later.' This has proved true: we went to Cambridge together and have not stopped talking since. On Tuesday we went public, as it were, with a 'conversation' at a fringe meeting here. Mr Letwin has an astonishing ability to argue any point persuasively — I remember him aged 18 endeavouring to prove that there are no trees in Canada — and he was particularly convincing here, He got a standing ovation from a huge crowd. No one is less of a plotter than Oliver Letwin, but when the shadow Home Secretary reminded us that Tony Blair had been shadow home secretary immediately before he became leader, one felt a point had been made.