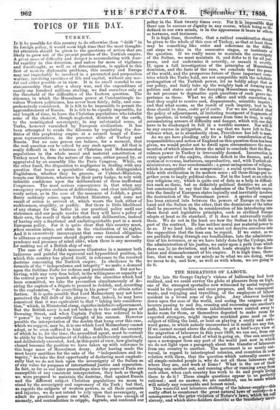 It is high time therefore, that a radical consideration shonk be given to the Whole of this ease of Turkey, so that at least there may be something like order and coherence in the direr_ cut steps we take in the successive stages, or incidents of the question. If we really mean to maintain the sovereignty of the Sultan, we must maintain it, and defer to it for all pm._ poses, and not undermine it covertly, or assault it overtly, If, upon a full investigation of the principles of Mussulmen dominion, and the facts of the case we conclude that the peae of the world, and the prosperous future of those important eonn. tries which the Turks hold are not compatible with the indefinite prolongation of the Turkish power, let us boldly adopt that as our policy, and fairly take up the weighty task of forming new polities and states out of the decaying Mussulman empire. We do not presume to dogmatize upon questions of such grave im- portance as these. What we do affirm and with conviction is that they ought to receive cool, dispassionate, scientific inquiry and that what seems, as the result of such inquiry, best to done should be done, cosite qu'il coate. For we are satisfied that the policy of adjournment, of irritating treatpaent of fragments of the question, in totally opposed senses from time to time is only accumulating arrears of difficulty and danger, which will one day have to be discharged in full in a terrible manner. Nor will it be any excuse in mitigation if we say that we have left to Pro- vidence what, as is abundantly clear, Providence has left to ram As we are here pleading only for a fuller consideration of the responsibilities and action of England on this question than has been given we would prefer not to dwell upon circumstances the mere mention of which almost forces the mind to conclude that the Bus- sulman power in Turkey is irrevocably doomed. Insurrection in every quarter of the empire, chronic deficit in the finance, and a system of revenue, barbarous, unproductive, and, with Turkish ad- ministrators, we fear unreformable ; a great antagonism of religion, which is susceptible of no compromise ; a social system incompa- tible with civilization in its modern sense ; all these things put to- gether seem to imply political chaos. Not in the least as an echo to any religious cry, which is quite out of date as a help in difficul- ties such as these but as definitelyrnpiolitical doctrine we are all but constrained these, say that the ad ssion of the Turkish empire into the family of European states logically and inevitably involves the destruction of the Mussulman power. A species of compact has been entered into between the powers of Europe on the one hand and the Sultan on the other, that the dominions of the latter shall be preserved to him, in consideration of his introducing into them fiscal and legislative principles, such as civilized Europe adopts at least as its standard, if it does not universally realize them. We do not in the least see how the Sultan is to fulfil his part of the contract. He has neither moral nor material power to do so. If we lend him either we must not deceive ourselves into the supposition that the loan can be repaid. If we enter, as we are partially doing through our bondholders, into the administra- tion of his revenues or as we have lately done by the Cyclops, into the administration Of his justice, we enter upon apath from which there can be 114 deviation, and which leads straight to the disso- lution and dismemberment of his empire. It is high time, there- fore, that we made up our minds as to what we are doing, what we mean to do, and how, as well as with whom, we are going to do it.