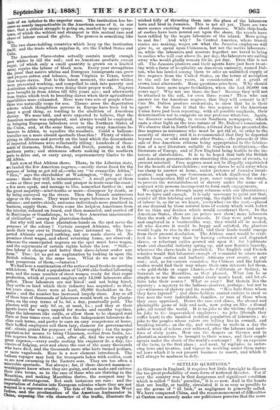 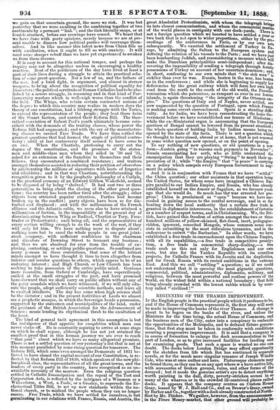 As things are in England, it requires but little foresight to discern the too great probability of some form of national disaster. For if ever the country was in that dangerous and significant condition which is called " fools ' paradise,' it is so now. And in the boasts that are loudly, or tacitly, circulated it is as easy as possible to see the germs of "ill luck," as negligence is generally called. We have conquered China and the recommencement of difficulties at Canton can scarcely make our politicians perceive that the more

we gain on that uncertain ground, the more we risk. It was but yesterday that we were exulting in the combining together of two continents by a permant " link "; and the link literally snaps, or at least is strained, before our crowings have ceased. We boast that 'we have done with party opinions, merely because we are at pre- sent unable to discern how political parties will rearrange them- selves. And in like manner this latest news from China fills us with exultation, when it ought to fill us with anxiety. It will need some sharper rebuff than we have yet experienced to awaken us from these dreams.

It is easy to account for this national temper, and perhaps the inquiry may not be altogether useless in encouraging a healthy reaetiOn. Most of the politicians of the day have lived at least a part of their lives during a struggle to attain the practical solu- tion of some great question. Not a few of us, and the fathers of the rest, had a hard fight, in argument, and almost in sterner weapons, to beng about the recognition of political equality for Dissenters ; the political servitude of Roman Catholics had to be abo- lished by a severe struggle, in reasoning and in that kind of Par- liamentary warfare which is well-nigh worse than the conflict of the field. The Whigs, who retain certain contracted notions of the degree to which this country may realize in modern days the theory of our constitution, had a lifelong struggle with the Tories, to extend the representation of the people ; they beat those heirs of the Stuart faction, and carried their Reform Bill. The theo- retical conviction of Robert Peel's youth ultimately became coin- cident with the demands of the trading classes, whose power the Reform Bill iad augmented ; and with the cry of the manufactur- ing classes we carried Free Trade. We have thus settled the greatest questions that had formed the staple of political contro- versy; until at last controversy itself seemed to have come to an end. When the Chartists, professing to carry out the dogma of the constitution, and the promises of the states- men and middle-class men whom they aided in '30 and '31, asked for an extension of the franchise to themselves and their fellows, they encountered a combined resistance ; and traitors amongst themselves assisted in reducing their petition ad absurdum by adulterating the millions of signatures with hosts of forgeries and ribaldries; and in that way Chartism, notwithstanding the recognition given to it by the prophetic philosophy of a Carlyle, or the practical economy of an Edward Gibbon Wakefield, seemed to be disposed of by being "shelved." It had cost two or three generations to bring about the closing of the other great ques- tions; the country has been rather tired after the struggle ; other objects have attracted popular attention. Parties had become broken up in the conflict ; party objects have been so far dis- turbed and displaced ; and with the millennium of the French alliance and the Atlantic cable, we seem also to have attained a millennium of faction, in the impossibility at the present day of discriminating between Whig or Radical, Chartist or Tory, Free- trader or Protectionist; each being all, and the representative of every section willing enough to do the work of the rest, if they will only let him. We have nothing more to dispute about ; nothing more but to enrol the whole people in one great joint- stock company, with sufficient confidence in the chairman and directors of Downing Street to transact any business ; and thus we are absolved for ever from the trouble of ex- ploring, contesting, or settling public questions. So confirmed are many persons in these convictions, that some of the loftiest minds amongst us have thought it time to turn altogether from inferior and secular questions to others, which appear to be of an enduring interest ; and High Church or Low Church has been seeking to take possession of the entire public mind. Geniuses more recondite, from Oxford or Cambridge, have superciliously smiled at the small struggles of the past, and have promised henceforward that we shall carry on public affairs without any of the petty scandals which we have witnessed, if we will only edu- cate the people, adopt sufficiently scientific methods, and leave all to exalted intellects. The day has come when high science shall be the dictator ; and in the present festivities at Leeds we almost see a prophetic masque, in which the Sovereign heads a procession, supported by the stateaffien and municipalities of the land, under the guidance of the British Association for the Advancement of Science ; music lending its rhythmical throb to the exultation of the hour.

The kind of general tacit agreement in this assumption is but the indulgence of that appetite for completion which man can never shake off. He is constantly aspiring to arrive at some stage on which he shall repose, although he has not yet attained the smallest proof that in this human journey we are ever to reach "that goal" about which we have so many allegorical promises. There is not a settled question of our yesterday's list that is not at this moment paralleled by some rising question for tomorrow. The Reform Bill, which some even amongst the Democrats of 1831 be- lieved to have closed the capital account of our Constitution, is re- flected by that Reform Bill of 1859, which speakers of the new phi- losophical class, the representatives of all the great towns, and the leaders of every party in the country, have recognized as an ma- - avoidable necessity of the morrow. Even the religious question settled in Catholic Emancipation and the repeal of the Test and i Corporation Acts, s reflected by the intrigues of a Wiseman or a Wilberforce, . a West, a Poole, or a Greslev, to supersede the Ec- clesiastie.al Titles Bill, to set up new standards within the na- tional church, or to mislead the people whom they can no longer - coerce. Free Trade, which we have settled for ourselves, is but germinating in our relations with France, Russia, and Austria, the

great Absolutist Protectionists, with whom the telegraph brings us into closest communication, and whom the commercial marine of the world places in contiguity with our dock-yards. There not a foreign question which we boasted to have settled a year o'r two back that is not open to wider proportions, either by the pro. ceedings of the conferences in Paris, or by our own aca subsequently. We vaunted the settlement of Turkey in Eu- rope, by admitting the Sultan to the European system and defining the relation of his vassals to the Porte ; and we have just been bombarding Jeddah, and reconsidering a measure which will make the Danubian principalities semi-independent ; after dia., covering the impossibility of sending a telegraph through Asiatic possessions of Turkey on account of her uncertain dominion; and in short, confessing to our own minds that "the sick man" is sicklier than ever he was. Russia, beaten in the war, has beaten us in the conferences ; and while she is beginning to supply her deficiencies by the great railway which will form her own high road from the north to the south of the old world, the Pamela- vonianism which she patronises, as rampant as ever in our Ionian islands, is again threatening "the integrity of the Ottoman em- pire." The questions of Italy and of Naples, never settled, are

now augmented by the question of Portugal. i

, upon which France is making some covert encroachment. Spain s .a standing diffi- culty. As for India, we have been reconstructing the home Go- vernment before we have reestablished our tenure of Itindoetan; while the ex-Ministerial organ is announcing that the European garrison of Bengal cannot be lowered from its present standard ; the whole question of holding India by Indian means being re- opened by the state of the facts. There is not a question which we thought to have closed, abroad or at home, that is not renewed in some wider question now opened, or on the point of opening.

To say nothing of new questions, or old questions in a new form—Austria going "to resume cash payments in November" ; Russia emancipating her serfs, who so little understand the emancipation that they are playing " Swing " to mark their ap- preciation of it ; while "the Empire" that "is peace" is carrying on a policy which compels every European Government to aug- ment its armies.

• And it is in conjunction with France that we have "settled" the China question ; our other assistants in that operation being the United States, for Whom some have imagined a Chinese Em- pire parallel to our Indian Empire, and Russia, who has already established herself on the Amoor or Sagalien, as we foresaw years ago that she would do. So much has the war arrested her pro- gress! China is proclaimed as "open" because we have suc- ceeded in gaining access to the central sovereign, and in so far beating down the local authority that a certain free trade is granted in diplomatic intercourse, in the establishment of factories at a number of seaport towns, and in Christianising. We, the Bri- tish, have gained this freedom of action amongst the two or three hundred millions of yellow-skinned, flat-faced, inert, pedagogue- ridden, ignorant, conceited Mongols, whose common sense con- sists in submitting to the most ridiculous tyrannies, and in the endeavour to outwit "the Barbarian." In other words, we have established a free trade in encroachment upon the Chinese Empire, with all its capabilities,—a free trade in competitive prosely- tism, a free trade in commercial sharp-dealing,—a free trade such as this not only for Englishmen and. our own sects, but also for the Yankee Republic with its countless projects, for Catholic France with its Jesuits and its duplicities, and for Greek Russia with its rooted ambitions in the extreme East. And this we call " settling " a question; as if we could not understand that it is opening the most gigantic questions, commercial, political, administrative, diplomatic, military, and religious, between the most powerful and restless powers of the 'world, on the widest field within a national boundary ; that field being already crowded with the lowest rabble which is by cour- tesy called " civilized !"