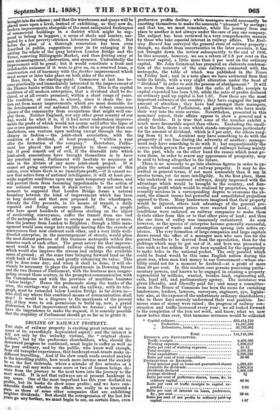 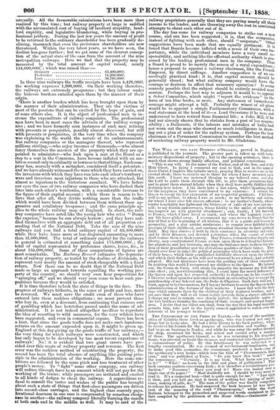 Ratio per cent of total expenditure '50-cis Dismanurrow OF RECEIPTS.

annually. All the favourable calculations have been more than realized by this time ; but railway property at large is saddled with the accumulated cost of buying off landlord stupidity, land- lord cupidity, and legislative blundering, while buying in pro- fessional jobbery. During the last few years the amount of profit to be returned to the ordinary shareholder has been gradually de- clining, insomuch that even the preference shareholders are now threatened. Within the very latest years, as we have seen, the decline has gone further ; but we get some of the clearest concep- tion of the actual state of the case from the account of the nine metropolitan railways. Here we find that the property may be measured by the total amount of capital raised, nearly 114,000,0001.; which was raised thus :—

In these nine railways the traffic receipts have been 4,428,000/, the working expenses 1,998,000/. On their working therefore, the railways are extremely prosperous ; but they labour under the hideous burdens entailed upon them by the manner of their origin. There is another burden which has been brought upon them by the manner of their administration. They are the victims of most of the passions that can be excited by the hope of gain, and of some others also. It is the object of professional men to in- crease the expenditure of railway companies. The professional men have been in most cases the advisers of the railway compa- nies; and we have formerly seen instances of such men retiring with presents or perquisites, possibly almost dismissed, but still with presents or perquisites, at the very time when the company was explaining to the world the nature of its embarrassments. But railway companies or the managers thereof, who represent millions sterling,—who enjoy incomes of thousands,—who almost fancy themselves the masters of the property which they are ap- pointed to administer—who look upon a seat at the Board as a step to a seat in the Commons, have become inflated with an am- bition second only in sublimity or lowness to that of kings. Each com- pany has, scarcely with a metaphor, considered itself a potentate ; and we have already witnessed the wars which they have carried on, the invasions with which they have rim into each other's territory ; wars and invasions most injurious to those who are attacked, but almost as injurious to the victorious assailant. We have before our eyes the case of two railway companies who have dashed their lines into each other's territories, with a considerable increase to the figure of their capital account; while there is reason to be- lieve that after all, they divide nothing more than the traffic which would have been divided between them without those ag- gressive and retaliatory trespasses ; and the same principle ap- plies to the whole railway map of England. In short, the rail- way companies have acted like the young heir who cries "Damn the expense," because he can always borrow ; and they have sad- dled themselves with an aggregate debt out of all proportion ex- ceeding that of the National Debt. Take the case of the nine railways and you find a total ordinary capital of 63,400,000/, while they have loans more or less disguised amounting to more than 51,000,000/. The total of ordinary capital for the railways in general is estimated at something wider 175,000,0001.; the total of capital represented by preference shares, loans, &c., is about 135,000,000/. Some of these comparisons of figures are most remarkable. The Railway Record estimates the deprecia- tion of railway property, as tested by the decline of dividends, to represent very nearly the amount of stock chargeable with a fixed

return. Now there can be no doubt that if National Debt made so large an approach towards equalling the working pro- perty of the country, we should very soon hear propositions for sponging off," and we should very soon cease to hear such pro- positions because they would be satisfied.

It is time therefore to look the state of things in the face. The progress of railways hitherto, in the sense of profit and loss, must be reversed. We must save the credit even of those who have entered into these reckless obligations; we must prevent those Who buy in, even at a discount, from continuing that ruinous sort of gambling which has heretofore passed under the name of ad- ministration. It is not indeed altogether needless to reprobate the idea of resorting to wild measures, for the very wildest have been suggested, and even in commercial organs. There has been a hint, that since the goods traffic does not make such handsome returns on the amount expended upon it, it might be given up. England at this day giving up the goods traffic of her railways,— the very thing for which railways were constructed, and which has only begun to be developed by tne most recent experience of railways No! it is evident that two giant errors have pre- sided over this waste of railway property and revenue. The first error was the reckless method of constructing the property, the second has been the total absence of anything like guiding prin- ciple in the administration of the working. Here the same am- bitions are followed by the same pitch and toss treatment of other people's money. To " fight " some other company, one railway will reduce through fares to an amount which will not pay for the working of the trains; while passengers are irritated and excited to all kinds of dodges to cheat the railway. A supercilious re- fusal to consult the tastes and wishes of the public has brought about such a state of things that first-class passengers are driven into second-class -carriages, and, the highest class scarcely pays. Irrational dearness in one case is compensated by senseless cheap- ness in another—the railway company literally burning the candle at both ends and in the middle as well. It may be said of the railway proprietors generally that they are paying nearly all their income to the lender, and are throwing away the rest in continued attempts to cheat each other out of it.

The day has come for railway companies to strike out a new course, and one has been suggested ; it is, that the companies instead of fighting with each other, should " cooperate." °the; suggestions have been made that are equally pertinent. It is found that Boards become inflated, with a sense of their own im- porta.nce, while the individual members have a very small re- sponsibility, and nothing like the effectual authority which is pos- sessed by the leading professional men in the company. Thus a Board is proud to be merely the screen of a royal expenditure; hence a proposal to appoint a railway chairman, like the French Emperor, by direct suffrage. Another suggestion is of an ex. ceedingly practical kind : it is, that capital account should be generally closed ; but what railway company would have the courage or decision to effect that necessary operation ? It seems scarcely possible that the subject should be entirely avoided next i session. Perhaps the best way to adjourn t would be to appoint a Select Committee, which might "report the evidence" in the form of ten blue books, or more. Any statesman. of immoderate courage might attempt a bill. Probably the wisest of all plans would, be to appoint a simple Parliamentary Commission, with a real statesman at the head of it—a Lord Overstone if he were not understood to have retired from financial life ; a John Mill, if he had not already shown that he shrinks from a post of less respon- sibility; a Dalhousie, if the labours and mistakes of India had not worn out the man who showed so much intelligence in draw- ing out a plan of order for the railway system. Perhaps the best chairman of a Permanent Commission to consider the best method of retrieving railway property would be Mr. Gladstone.