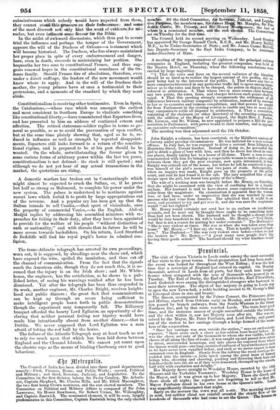 The Council of India has been divided into three grand departments, namely—First, Finance, Home, and Public Works ; second, Political and Military; and third, Revenue, Judicial, and Legislative. To the Committee on the first division belong Sir Proby Cautley, Mr. Arbuth- not, Captain Shepherd, Mr. Charles Mills, and Mr. Elliot Maenaghten, the two first being Crown nominees, and the rest elected members. The Committee on Political and Military Affairs is composed of Sir John Lawrence, Sir Henry Rawlinson, Sir Robert Vivian, Mr. Willoughby, and Captain Eastwick. 'The nominated element, it will be seen largely predominates in this Committee, Captain Eastwick being the only elected

tive Pairloses, the members are, Sir James Hogg, Mr. Mangles, Sir F deriek Currie,, Mr. Prinsep, and Sir Henry Mon*omery, the last ofwhom is a. nominated member, and the rest elected, The Commiftoee sat on Tuesday for the first time.

The Council held its second meeting on Wednesday. Lord Stanley has appointed Sir George Russell Clerk, K.C.B., and Mr. Henry Bailli, M.P.„ to be Under-Secretaries of State' and Mr. James Cosmo Melvij late Deputy-Secretary to the East India Company, to be Assistant. under-Secretary of State.

A meeting of the representatives of eighteen of the principal railway companies in England, including the greatest companies, was held at the Euston Hotel, on Thursday, when the following resolutions were carried by large majorities.

"1. That the rates and fares on the several railways of the kingdom should be so fixed as to realize the largest amount of net profits, due re- gard being had to the interests of the public. 2. That where any two or more companies interested in any particular traffic fail to agree among them. selves as to the rates and fares to be charged, the points in dispute shall he referred to arbitration. 3. That where two or more routes exist between any two points, the rates, fares, and charges between such points shall be equal. 4. That this meeting strongly recommends the settlement of all differences between railway companies by arbitration, instead of by recourse to law or to excessive and ruinous competition, and that powers be Bought for from Parliament in the ensuing session to enable any two or more rail- way companies to settle all disputes by arbitration. 5. _That a committee, consisting of the chairmen (or other directors) of the assenting companies, with the addition of the Mayor of Liverpool, the Right Hon. J. Parker, Mr. Leeman, and Mr. Wilson, be now appointed to prepare a Bill for pre- sentation to Parliament, with power to add to their number, and to appoint an executive sub-committee."

The meeting was then adjourned until the 7th October.

John Knight, a cabman, has been convicted, at the Middlesex sessions of a larceny under peculiar circumstances. He was indicted for a more serious offence. In July last, he was engaged to drive a servant from Islington to Henrietta Street, Covent Garden. Instead of doing so, he persuaded the girl to drink a glass of beer with him, and then he drove her about in vari- ous places, finally taking her to a house of ill-fame. There a man servant remonstrated with him for bringing a respectable woman to such a place, and between them they got the poor creature now quite intoxicated, to bed. Knight was ordered out of the house, but before he left he contrived to pee. sees himself of the girl's money and two pairs of studs. Subsequently, when an inquiry was made, Knight gave up the property at the police court, and said he had found it in the cab. The jury acquitted him of any design upon the girl, but found him guilty of the robbery.

The wife of a working man was brought before Mr. Henry, on Saturday, that she might be examined with the view of confining her in a lunatic asylum. Her husband is said to have shown some eagerness to obtain an order from the magistrate. On examination it appeared that the woman was, or had been, under an impression that she was watched by some persons who had come from America. She admitted that it might be an error, and promised to try and get over it, and she was sure the magistrate would "see her righted." Mr. Henry would certainly not send her to an asylum on insufficient grounds, and he must say he thought there ought to be something more than had yet been shown. The husband said he thought a change of air would be very beneficial to his wife's health. Mr. Henry.—" Very likely, but that is not a reason for putting her under restraint." The Husband.— " She is very violent at times. She was so when she was taken away from home." Mr. Henry.—"I dare say she was. That is hardly a proof ofmad- ness." The Husband.—" She was very violent once before—when we had the brokers in." Mr. Henry.—"A great many sane people don't like having their goods seized." The husband should try what kindness would do.

member. Of the third Committee, for Revenue. Judicial, and Logi-oZ