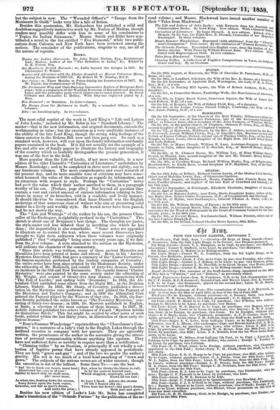 On the 4th September, at the Church of the Holy Trinity, Miltou-next-Graves- end, George, third son of Samuel Parkinson, late of the Aceountant-Geamars Office, to Frances Anne, eldest daughter of Mr. John Pasmore of Windsor, Berks. On the 4th, at the parish church of Clapham, Osborne P. dross, Esq., to Mary, second daughter of Dr. Young, of Clapham Common. On the 7th, at Ilanworth, Middlesex, by the Rey. 3. Aitken, assisted by the Bev. 0. Cresswell, Joseph William Chitty, Esq., of Lincoln's Inn, Barrister-at-law and Fellow of Exeter College, Oxford, second son of Thomas Chitty, Esq., of the Inner Temple, to Clara Jessie, eldest daughter of the Right Hon. the Lord Chief Baron and Lady Pollock.

On the 8th, at Charlton Kings, Richard William Banks, Esq., of Ridgenemm, Herefordahire, to Emily Rosa, second daughter of N. Hartland, Esq. of the Oak lands, near Cheltenham.