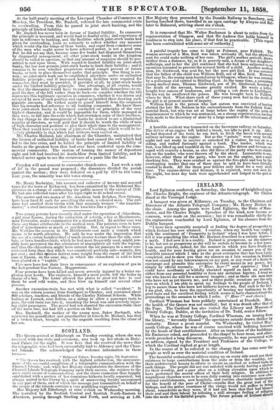 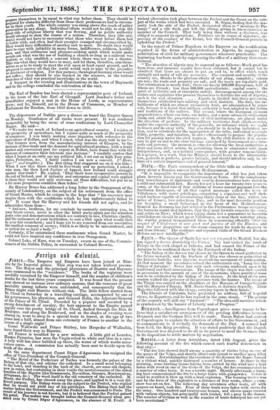 Lord Eglinton conferred, on Saturday, the honour of knighthood upon Mr. Charles Bright, the engineer of the Atlantic telegraph. Sir Charles dined at the Viceregal Lodge.

A banquet was given at Killarney, on Tuesday, to the Chairman and Directors of the Atlantic Telegraph Company; Mr. Henry Herbert in the chair. Among the guests were Lord Eglinton, the Duke of Man- cheter, and Sir Charles Bright. Speeches of the kind, now become so common, were made on the occasion ; but it was remarkable chiefly for the explanation vouchsafed by Lord Eglinton, of his absence from the Dublin banquet. "I have been agreeably surpriset at finding the degree of prosperity to which Ireland has now attained. I confess, when my health was coupled with the sentiment of Prosperity to Ireland' when I was here before, I felt it was something like what Mr. Herbert described to a certain degree- s. myth. I feel now it is a reality. Ireland is prosperous, as she deserves to be, but not so prosperous as she will be certain to become in a few years. I am most grateful, indeed, for the manner in which you have drunk my health, and for your having given me an occasion to assure you of the heartfelt interest which I take in the great enterprise that has been lately completed, and to show you that my absence on a late occasion in Dublin was not caused by any lukewarnyness on my part, or any want of a desire to encourage and promote this enterprise by every means in my power, but simply by official necessity. ("Hear, hear !" and applause.) That I could have needlessly or wilfully absented myself on such an occasion, either from any personal hostility or from any sectarian bigotry, I trust no one who knows me will for a moment imagine ; and as there are men here who have not as yet known me, and as these public occasions are the only ones on which I am able to speak my feelings to the people of Ireland, I beg to assure those who have not hitherto known me, that such is the fact. I am glad, also, to have the opportunity of bearing my testimony to the good taste and the excellent feeling which seems to have characterized the proceedings on the occasion to which I refer. (" Hear !" and cheers.) Cardinal Wiseman has been publicly entertained at Dundalk. Here the health of the Queen was not omitted ; but it was drunk after that of the Pope. The Cardinal has also visited the Library and Museum of Trinity College, Dublin, at the invitation of Dr. Todd, senior fellow. When he was at Trinity College, Cardinal Wiseman, on issuing from the library, "fervently blessed" the spectators outside drawn thither by curiosity. Hence a great scandal. On Wednesday, he visited May- nooth College, where he was of course received with befitting honours by the heads of that establishment. After an inspection of the buildings, his Eminence robed, and proceeded to the chapel to hear mass, and after- wards preached a long discourse. Subsequently, he was presented with an address, signed by the President and Professors of the College, to which the Cardinal replied at great length. In the course of it he referred to the change that has come over the people as well as over the material condition of Ireland.

The beautiful ecclesiastical edifices rising up on every side owed not their existence to large contributions from the state or from the wealthy, nor their architectural beauty to efforts to create an exalted or refined taste in such things. The people did not rest satisfied with merely having a shelter for their worship, and a poor altar on a trifling elevation upon which to have performed the secret' offices of their holy religion. In addition to magnificent churches were to be seen daily coming into existence new edu- cational establishments, new hospitals, and various charitable Institutions for the benefit of the poor of Christ—results that the great zeal of the bishops, and the active exertions of the clergy would not suffice to brui about, remarkable as they were, if it had not been that God had bleara their zeal and their labour by infusing a still stronger feeling of religion into the souls of his faithful people. The future priests of Ireland should prepare themselves to be equal to what was before them. They should be iirepared for obstacles different from those their predecessors had to encoun- tei. in their youth. The whole country was rising above the reach of paltry persecution m anyshape. Individual efforts would not be able to stop the great tide of religious liberty that was flowing, and no public authority would attempt to stem the course of a nation. Therefore, they (the stu- dents) would not have to encounter what those who went before them had to battle with, and often had their energies cramped and circumscribed by. They would have difficulties of another sort to meet. No doubt they would have to cope with infidelity in many ?orms, indifference, coldness, worlclli- ness, and that utilitarian and pleasure-seeking spirit which would make people ask what was the use of building a church so long as a railroad was wanted, or why establish a convent where there was not yet a theatre. This was what they would have to meet, and let them, therefore, arm them- selves so as to be ready to meet the evil upon at least equal ground, and be prepared to answer ell that the world would Beek to urge to the prejudice or detriment of religion. For this purpose, theological learning alone would not suffice ; they should be also learned in the sciences, in the various branches of what was practical knowledge in the world.

A banquet in the evening and illuminations in the town of Maynooth and in the college concluded the celebration of the visit.

The shipowners of Dublin gave a dinner on board the Empire Queen on Monday. Gentlemen of all ranks were present. It was rendered memorable by being the scene of sonic confessions by Lord Chancellor Napier. He said-

" We make too much of Ireland as an agricultural country. I rejoice at the prosperity of agriculture, but I rejoice quite as much at the prosperity of commerce. I was lately making some inquiries with reference to the agriculture of Belfast, and when I asked, what was-the story told to me ?— Our farmers now, from the manufacturing interest of Glasgow, by the increase of free-trade and the demand for agncultural produce, with a ready market and convenient port for export at Belfast, have found that with the increase of commerce their interests also increase.' I candidly confess that when I began at an early age my political life, I set out on high Tory prin- ciples, Protection, &c. I fairly confess I am now a convert. ("Hear, hear!" and laughter.) The first thing that staggered me on it was this— When I saw that there would be free-trade and no protection, I asked a wise man, the then Lord Justice of Appeal, how Ireland could struggle against free-trade ? He replied, 'That there were recuperative powers in the soil of Ireland, and if industry and enterprise and capital were applied to them they would not only overcome all those difficulties, but put us in a far more prosperous condition than before.'"

Sir Harvey Bruce has addressed a long letter to the Orangemen of the county of Londonderry, on the subject of his retirement from the office of Grand Master, which he resigns in the hope that "his successor may inspire them with the confidence which he has unfortunately failed to do." It seems that Sir Harvey and his friends did not agree, and he admonishes them thus- " And now, brethren, let me conclude by earnestly entreating you, in your future career, never to allow the bitter party-spirit nor the senseless party cries and demonstrations which are contrary to law, Christian charity, and the ordinances of your institution, to cast a blot upon what would then be your fair escutcheon ; and I hope yet to see removed from our association the smallest remnant of secrecy, which is so likely to be misconstrued, and so useless for so loyal a body." Certainly, if he entertained these sentiments when Grand Master, he could not have inspired any confidence in true Orangemen.

Colonel Lake, of Kars, was on Tuesday, sworn in one of the Commis- sioners of the Dublin Police, in succession to Colonel Browne.