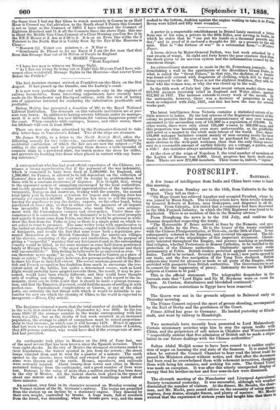 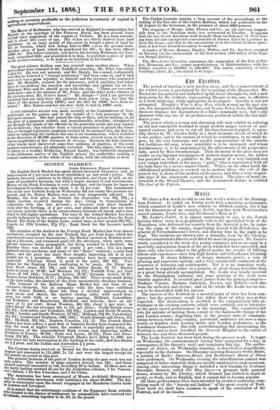 A few items of intelligence from India and China have come to hand this morning.

The advices from Bombay are to the 19th, from Calcutta to the 8th August. They tell us that-

' Sir Hope Grant has relieved Anaghur and occupied Fyzabad, where he was joined by Maim Singh. The Gwalior rebels have been totally defeated by General Roberta at Kotara, near Oodeypore, and dispersed in all di- rections. From Calcutta, it is stated that a conspiracy had been discovered in the 18th Punjaub Infantry, in which the 76th iiegiment was found to be implicated. There is no mention of this in the Bombay advices."

From Hongkong the news is to the 22d July, and confines the Russian despatches respecting the treaty.

"The Honourable F. Bruce arrived at Suez by the Nemesis, and pro- ceeded to Malta by the Peru. He is the bearer of the treaty concluded with the Chinese Plenipotentiaries, at Tien-sin, on the 26th of June. It was subsequently referred to the Emperor, and received his approval. The fol- lowing are some of the stipulations of this important document. Christi- anity tolerated throughout the Empire and persons teaching or professing that religion, whether Protestants or Roman Catholics, to be entitled to the protection of the Chinese authorities. Diplomatic agents may reside permanently at Pekin. British traders protected against excessive transit duties. Tariff to be revised. Several [nine, it is said, 1 new ports opened to our trade, and the free navigation of the Yang Teze declared. British subjects may travel for pleasure or trade to all parts of the Empire, when provided with passports from British authorities. The Governments to act m concert for the suppression of piracy. Indemnity for losses by British subjects at Canton to be paid." This is the official statement. The telegraphic despatches in the journals state that "Lord Elgin and Sir M. Seymour were en route for Japan. At Canton, disturbances and bloodshed continued."

The quarantine restrictions in Egypt have been removed.

The Queen was out in the grounds adjacent to Balmoral early on Thursday morning. The Prince Consort enjoyed the sport of grouse shooting, accompanied by the Earl of Derby and the gentlemen of the Court. Prince Alfred has gone to Germany. He landed yesterday at Gluck- stadt, and went by railway to Hamburgh.

Two memorials have recently been presented to Lord Malmesbury. Certain missionary societies urge him to stop the opium traffic with China and the proprietors of salt mines in Cheshire and Worcestershire " respectfully entreat that free admission of British salt be made a stipu- lation in our future dealings with the Chinese authorities."

Sultan Abdul Medjid seems to have been roused to a sudden explo- sion of anger on learning the real state of the finances. It is stated that when he entered the Council Chamber to hear read the latest irade he passed his Ministers almost without notice, and that after the document had been read he overwhelmed them with vehement invectives, chargipg them with being his enemies, and seeking his ruin. The Grand Vizier was made an exception. It was after this utterly unexpected display of energy that his brother-in-law and four sons-in-law were dismissed.

The eleventh meeting of the Manchester and Liverpool Agricultural Society terminated yesterday. It was successful, although wet weather diminished the number of visitors. At the dinner, Mr. Brooks, the chair- man, and Mr. Mechi, gave sound advice on the necessity of using steam-. engines, deep drains, straight fences, and plenty of manure. Mr. Med.0 averred that the experience of sixteen years had taught him that there's A very extensive seizure was made recently at the Customhouse of Con- stantinople on the person and in the trunks of a lady passenger by the Liverpool steamer. She had joined the ship at Syra, and on landing, in all the glory of a gorgeous toilette and immeasurable crinoline, attempted to get through the hands of the officials by the generally quick and easy agency of a baksheesh ; but whether from a vicious pruriency to plumb the crino- line, or through legitimate suspicion excited by its unusual size, the Bey in- sisted on subjecting the luckless fair one to an examination, which resulted in the discovery of 80,000 piastres in false notes, stowed away in the mys- terious amplitudes of her velment* de dessous. Between the false bottoms of her tiaras were discovered some four millions of piastres, of the same spurious manufacture, all admirably executed. The fair sinner, who is said to belong to a wealthy Moldavian Boyard family, was forthwith consigned to the loathsome misery of the Turkish prison, the authorities making a general confiscation of the whole of her effects, with the crinoline to boot. nothing so certainly profitable as the judicious investment of capital in agricultural improvement.

The Mayor of Melbourne, who has arrived in England to congratulate her majesty on the marriage of the Princess Royal, has been several times ejected chief magistrate of the capital of Victoria. He is a born colonist, and is about fifty years of age. His riches are chiefly derived from land purchases. At an early period of his career he bought a piece of land for let in Victoria, which now brings him in 800/. a year for ground rents. Another piece of land, which he purchased for 301., he has been offered mot. for. His fellow-citizens, just before his leaving Melbourne for Eng- land, subscribed 6001. and presented it to him, to purchase a piece of plate

in the mother i -country, to be kept as an heirloom n his family.

The great picture dealing ease has entered upon another phase. When pr 0 ceedings were resumed at the Guildhall yesterday, Mr. Peter was vainly called for. He was not present, and Mr. Sleigh, his counsel, indignantly said that he believed a "corrupt settlement" had been come to, and if that were so it was a gross injustice to himself and the attorney who instructed him. Mr. Metcalfe, counsel for the prisoners, said if anything had taken place it was without his sanction and knowledge and against his advice. Alderman Wire said he should go on with the case. " There are two awk- ward facts—one is the absence of Mr. Peter, and the other is the absence of the pictures from Mr. Peter's house." Mr. Sleigh—" And I arn privately informed that not only have the pictures been taken away, but that the whole of the money (nearly. 12081.) and the bill for 1000/.' have been re- turned." Mrs. Barnes and her son were held to bail in 10001. each.