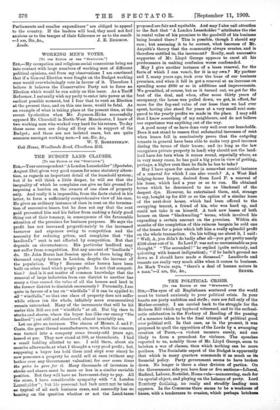 Sra,—Your correspondent " A London Leaseholder" (Spectator, August 21st) gives very good reason for some statutory altera- tion, as regards an important detail of the leasehold system ; but if he will think a little deeper, he will see that the inequality of which he complains can give no fair ground for imposing a burden on the owners of one class of property only. And really it is impossible, from the facts stated in his letter, to form a sufficiently comprehensive view of his case. He gives an ordinary instance of rises in rent on the termina- tion of successive leases, but he does not say that the rent paid prevented him and his father from making a fairly good thing out of their tenancy, in consequence of the favourable situation of the premises for business purposes. He says the profit has not increased proportionately to the increased turnover and expenses owing to competition and the necessity for reducing prices, and complains that "the landlord's " rent is not affected by competition. But that depends on circumstances. His particular landlord may not suffer from competition. But any amount of "landlords" do. Mr. John Burns last Session spoke of there being fifty thousand empty houses in London, despite the increase of the population. Why Because other houses have been built on other land which people prefer. Is not that competi- tion ? And is it not matter of common knowledge that the removal of large industries from one district to another has many a time caused the value of all the houses and land in the former district to diminish enormously ? Personally, I am quite in favour of a tax on " windfalls " if it can be applied to all " windfalls," so that one class of property does not suffer while others (on the whole, infinitely more remunerative) remain untouched. Many of the increments that will be hit under this Bill are not " windfalls " at all. But big rises in stocks and shares, where the buyer has (like our enemy "the landlord") sat still and slumbered, almost invariably are. . Let me give an instance. The shares of Messrs. J. and P. Coats, the great thread manufacturers, were, when the concern was turned into a company some twenty-odd years ago, issued at par. They now stand at 800, or thereabouts. I had a small holding allotted to me. I sold them, about six months afterwards, at what I thought a very good profit ; bat, supposing a buyer has held them (and slept ever since) he now possesses a property he could sell at once (without any bother over any Government valuation) for over seven times the price he gave for it. Many thousands of investors in stocks and shares must be more or less in a similar enviable position. But they will have no Increment-duty to pay. All the same, I have considerable sympathy with "A London

7.—,aas,jaiaa " ; hat :-_is Teeeenel- teal leek m•a•-• Laa as typical of all such business cases, and assuredly has no bearing on, the question whether or not the Land-taxes proposed are fair and equitable. And may I also call attention to the fact that "A London Leaseholder" attributes the rise in rental value of his premises to the goodwill of his business being located there ? This is possible, though I should say rare ; but assuming it to be correct, what becomes of Mr. Asquith's theory that the community always creates, and is therefore entitled to, the increment? Really, each successive supporter of Mr. Lloyd George appears to excel all his predecessors in making confusion worse confounded.

May I give another instance of a lease renewal, for the facts of whieh I can vouch, for it is my own ? My partner and I, many years ago, took over the lease of our busineis premises, and when it fell in got a renewal at an increase on spending some £600 or so in additions and improvements. We grumbled, of course, but as it turned out, we got far the best of the deal, and when, after some thirty years of occupancy, the house was pulled down, we got, in effect, far more for the fag-end value of our lease than we had ever spent, having also stood for years at a very small rent com- pared to the yearly profits we made in the place. I may add that I know something of my neighbours, and do not believe our experience was anything out of the way.

A good many of us have done very well over our leaseholds. Does it not stand to reason that substantial increases of rent when leases fall in conclusively prove that the outgoing tenants in general have been able to make very good incomes during the terms of their leases ; and (so long as the law recognises private property in land) why should not the land- lord have his turn when it comes round, especially where, as in very many cases, he has paid a big price in view of getting, perhaps, a higher rent than he finds he has to take ?

May I have space for another (a somewhat comic) instance of a renewal for which I can also vouch? A, a West End lodging-house keeper, desired from Lord P. a renewal of his lease, which had a year or so to run. He obtained terms which he denounced to me as blackmail of the deepest dye. However, he entertained them, and, strange to say, bought up for L50 or so the option of a similar lease of the next-door house, which had been offered to the occupying tenant, a friend of his, who was hard up, and could not take it on himself. A took new leases of both houses on these "blackmailing" terms, which involved his expending a certain amount on the premises. Within six months of the completion of this ruinous bargain he sold one of the leases for a price which left him a really splendid profit on the whole transaction. On his telling me about it, I said: " Well, A, you didn't do badly after all got prettynearly 2500 clear out of it. So Lord P. was not so unreasonable as you thought." " The scoundrel " he replied (quite seriously, and quivering with honest indignation); "if he hadn't ground me down so I should have made a thousand." Landlords and tenants are really very much alike when it comes to business. As Mark Twain says, " there's a deal of human nature in