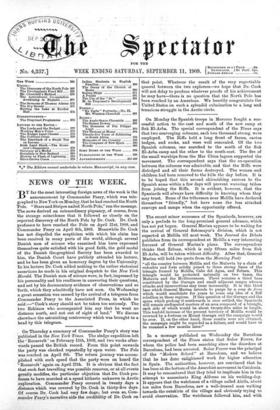 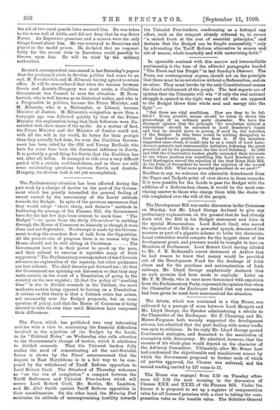 Page 1, 11 September 1909 — In a message published on Wednesday the Barcelona correspondent of
Close

In a message published on Wednesday the Barcelona correspondent of

the Times states that Seiior Ferrer, for whom the police had been searching since the disorders at Barcelona, had been arrested. Senor Ferrer was the principal of the "Modern School" at Barcelona, and we believe that he has done enlightened work for higher education in Spain. The authorities, however, are convinced that he has been at the bottom of the Anarchist movement in Catalonia. It may be remembered that they tried to implicate him in the attempt to assassinate King Alfonso on his wedding-day. It appears that the watchman of a village called Alella, about ten miles from Barcelona, saw a well-dressed man walking towards the outskirts of the village and obviously trying to avoid observation. The watchman followed him, and with

the aid of two rural guards later arrested him. He was taken to the town hall of Alella, and did not deny that he was Senor Ferrer. An Esperanto grammar and a camera were the only things found about him. He was conveyed to Barcelona and placed in the model prison. He declared that no responsi- bility for the recent riots in Barcelona could possibly be thrown upon him. He will be tried by the military authorities.