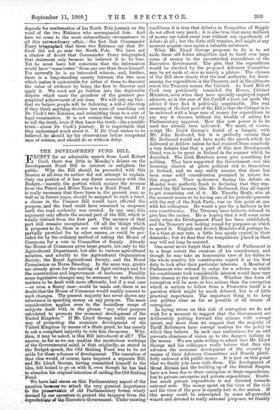 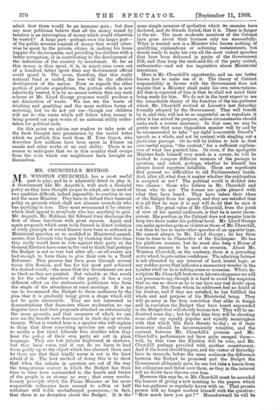 EXCEPT for an admirable speech from Lord Robert Cecil, there was little in Monday's debate on the Development Fund Bill to interest or enlighten the public. Why the Bill should be proceeded with this Session at all even its author did not attempt to explain Only one portion of it has any direct connexion with the Budget,—namely, the portion which assigns the revenue from the Petrol and Motor Taxes to a Road Fund. If it is really necessary that these taxes in the present year, as well as in future years, should be assigned to such a fund, a clause in the Finance Bill would have effected the purpose, and the fund could have remained in suspense until the road authority was created. In any case, this argument only affects the second part of the Bill, which is totally distinct from the first part. The mystery of that part still remains unexplained. Of all the things which it proposes to do, there is not one which is not already partially provided for by other means, or could be pro- vided for by the ordinary method of asking the House of Commons for a vote in Committee of Supply. Already the House of Commons gives large grants, not only to the Agricultural Department, but also to various agricultural societies, and notably to the Agricultural Organisation Society, the Royal Agricultural Society, and the Royal Commission on Horse Breeding. In the same way, grants are already given for the making of light railways and for the construction and improvement of harbours. Possibly some legislative changes may be necessary to enable these matters to be dealt with more efficiently, but if a real case —or even a flimsy case—could be made out, there is no doubt that the House of Commons would readily consent to such changes. The present majority has never shown any reluctance in spending money on any purpose. The same • consideration applies even to the boundless range of subjects dealt with in the phrase " any other purpose calculated to promote the economic development of the United Kingdom." If Mr. Lloyd George really sees any way of promoting the economic development of the Trnited Kingdom by means of a State grant, he has merely to ask a compliant majority to vote him the money. Why, then, it may be asked, is this Bill introduced at all? The answer, as far as we can analyse the mysterious workings of the Governmental mind, is that originally, as stated in the Budget speech, the Old Sinking Fund was to be set " aside for these schemes of development. The execution of that idea would, of course, have required a separate Bill, and Mr. Lloyd George, having committed himself to the idea, felt bound to go on with it, even though he has had to abandon his original intention of raiding the Old Sinking Fund.

We have laid stress on this Parliamentary aspect of the question because we attach the very greatest importance . to the preservation of old Parliamentary forms, wisely devised by our ancestors to protect the taxpayer from the depredatiqua of the Executive Government. Under existing , conditions it is true that debates in Committee of Supply do not effect very much ; it is also true that many millions of money are voted every year without any opportunity of debate at all ; but the form still remains, and might at any moment acquire once again a valuable substance.

What Mr. Lloyd George proposes to do is to set aside these old forms altogether, and to hand over large sums of money to the uncontrolled expenditure of the Executive Government. The plea that the expenditure would be checked by the proposed Advisory Committee may be set aside at once as merely a phrase. The clauses of the Bill show clearly that the real authority for deter- mining the expenditure is the Treasury, and in the ultimate resort the Treasury means the Cabinet. As Lord Ittb3rt Cecil very pertinently reminded the House, Cabinet Ministers, even when they have specially employed expert advisers, as in the case of the Cardiff school, set aside the advice if they find it politically unpalatable. The real meaning of the first part of the Bill is that the Cabinet is to be endowed with a large sum of money for expenditure in any way it chooses, without the trouble of asking for Parliamentary approval. How this new power is to be used has already been indicated. We must, of course, accept Mr. Lloyd George's denial of a bargain with Mr. John Redmond, but it is perfectly certain that Mr. Redmond would not have made the speech which he delivered at Arklow unless he had received from somebody a very definite hint that a part of this new Development Grant was to be spent in Ireland in the manner which he described. The Irish Members never give something for nothing. They have supported the Government over the licensing clauses at grave political risk to themselves in Ireland, and we may safely assume that there has been some solid consideration promised in return for this support. Their spokesmen during the debate on Monday were perfectly frank in declaring that they sup- ported the Bill because, like Mr. Redmond, they all expect to get something out of it. Mr. Timothy Healy, who at the moment seems to be having one of his periodic quarrels with the rest of the Irish Party, was on this point at one with his colleagues. He wants a pier for a, harbour in his own constituency. The Treasury have hitherto refused to give him the money. He is hoping that it will come more easily when the Development Fund has been established, and the Treasury are looking round for purposes on which to spend it. English and Scotch Members will perhaps be, for a time at any rate, a little less openly cynical in their demands ; but we fear that the temptations placed in their way will not long be resisted.

One must never forget that a Member of Parliament is to a large extent the creature of his constituency, and though he may take an honourable view of his duties to the whole country, his constituents regard it as his first duty to look after their particular interests. A Member of Parliament who refused to cadge for a scheme in which his constituents took considerable interest would have very little chance at the next Election. Whether this form of corruption will be more or less serious than the corruption which is certain to follow from a Protective tariff is a question which might be much debated, but is of little practical importance. The important thing is to keep our politics clear as far as possible of all causes of corruption. In laying stress on this risk of corruption we do not wish for a moment to suggest that the Government are deliberately putting forward this scheme with corrupt intent, any more than we suggest that the majority of Tariff Reformers have corrupt motives for the policy in which they believe. In each case enthusiasm for an end. prevents clearness of vision as to the danoers lurking in the means. We are quite g to admit °that Mr. Lloyd George and his colleagues really believe that they can advance the economic development of the country by means of their Advisory Committees and Boards plenti- fully endowed with public money. It is just on this point that we finally join issue with them. The development of Great Britain and the building up of the British Empire have not been due to State enterprise or State expenditure, but to private enterprise and private expenditure. Doubt- less much private expenditure is not directed towards national ends. The money spent on the vices of the rich and the vices of the poor is equally lost to the nation. If this money could be intercepted by some all-powerful wizard and devoted to really national purposes, we frankly admit that there would be an immense gain ; but does any sane politician believe that all the money raised by taxation is an interception of money which would otherwise be wasted? A large part—perhaps even the larger part— of the public revenue consists of money that would other- wise be spent by the private citizen in making his home happier for its occupants, and providing his children with a better occupation, or in contributing to the development of the industries of the country by investment. So far as this money is thus spent, it is, in ninety-nine cases out of a hundred, better spent than any Government official could spend it. The more, therefore, that this really national fund is raided, the less will be the effective development of the nation. Even as regards the other portion of private expenditure, the portion which is now admittedly wasted, it is by no means certain that any such scheme as Mr. Lloyd George proposes would produce a net diminution of waste. We can see the waste of drinking and gambling and the more reckless forms of motoring, but we do not yet see—though our children will see it—the waste which will follow when money is being poured out upon works of no national utility under- taken for political ends.

On this point we advise our readers to take note of the facts brought into prominence by the useful letter which we publish this week from M. Yves Guyot, who describes how millions have been spent in France on canals and other works of no real utility. There is no reason to anticipate that we in this country shall escape from the evils which our neighbours have brought on themselves.