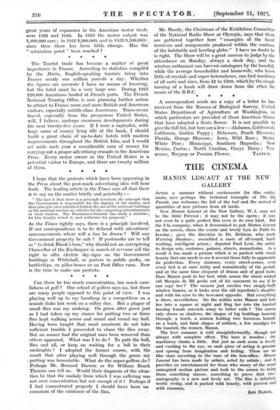 MANON LESCAUT AT THE NEW GALLERY

AFTER a summer without excitements for film enthu siasts, save perhaps the technical triumphs of The Rig Parade, one welcomes the fall of the leaf and the arrival of quantities of new pictures from all lands.

Now Manon Lescaut at the New Gallery, W. 1, may not be the Abbe Prevost ; it may not be the opera ; it may not even be a quite perfect film even in its own kind. But the Ufa company, when it determined to put Manon Lescaut on the screen, chose the exotic and lovely Lya de Putti for heroine ; gave the direction to Dr. Robison, who made Warning Shadows ; assembled a caste of all-round, hard. working, intelligent actors ; deputed Paul Leni, the artist, to design sets, costumes, palaces, streets, monasteries. As a result it has made a picture which is so packed with visual beauty that one needs to see it several times fully to appreciate its perfection. Every staircase, every street-corner, even every bed is at once richly and romantically of the period, and at the same time eloquent of drama and of good taste. Does Manon pout in her bed, while across the street wicked old MarqUis de Bli peeks out of his casement to see if he can espy her ? The camera just catches two simply-built window frames, as it looks over the old reprobate's shoulder and with his eyes to the love-nest opposite. But everything is there, nevertheless. Do the militia seize Manon and hale her into a square at night and fling her into the tumbril bearing female convicts away to bitter exile ? The screen only shows, us shadows, the shapes of big buildings looming through, a torch, a minion holding two ferocious hounds on a leash, and faint shapes of soldiers, a few smudges for the tumbril, the women, Manon.

The love romance is told straightforwardly, though not always with complete effect. The hero is wooden : the • machinery clanks a little. But just as each scene is lovely

• and exciting to the -eye, so each piece of acting is genuine and sprung from imagination and feeling. These are no film stars cavorting to the tune of the box-office.- Manes Lescaut has been made by artists, acted by artists ; and it provides an entertainment for those who weary of the usual uninspired motion picture and look to the screen to bring them something sincere, something to prove that cine- matography is a new and lively art. The film is infinitely worth seeing, and is packed with beauty, with passion and with romance.