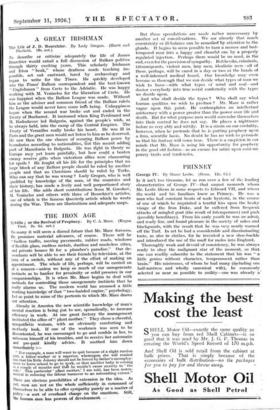 The Lite of J. D. Bourchier. By Lady Grogan. (Hurst and Blackett. 18s. net.) To describe or criticize adequately the life of James Bourchier would entail a full discussion of Balkan politics through thirty exciting years. This scholarly Irishman and Eton " beak," whose deafness made teaching im- possible, set out eastward, lured by . archaeology and began to write for the Times. He quickly developed into the Times' Balkan correspondent and the best-known " Englishman " from Crete to the Adriatic. He was happy working with M. Venizelos for the liberation of Crete. He was happiest when the Balkan League was made. Without him as the adviser and common friend of the Balkan rulers the League would never have come infb being. Unhappiness began when the second war broke out and ended in the Treaty of Bucharest. It increased when King Ferdinand and M. Radoslavov led Bulgaria, against the people's wish, as he always held, into the camp of the Central Empires. The Treaty of Versailles really broke his heart. He was ill in Paris and the great men would not listen to him as he deserved. Be saw then the one chance of securing Balkan peace by boundaries according to nationalities, but this meant adding, part of Macedonia to Bulgaria. He was right in theory as Europe may yet learn painfully, but how could a beaten enemy receive .gifts when victorious allies were clamouring for spoils ? He fought all his life for the principles that no large block of any Balkan people should be ruled by another people and that no Christians should be ruled by Turks. Who can say that he was wrong ? Lady Grogan, who is well qualified by knowledge of the man, of the countries and their history, has made a lively and well porportioned story of his life. She adds short contributions from M. Gueshov,' M. Venizelos and others with three of Bourchier's articles, one of which is the famous Quarterly article which he wrote during the War. There are illustrations and adequate maps.