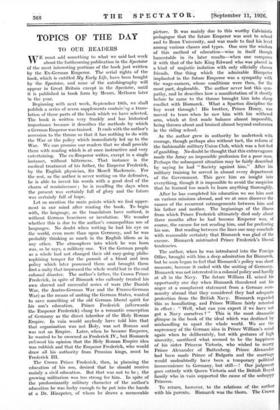 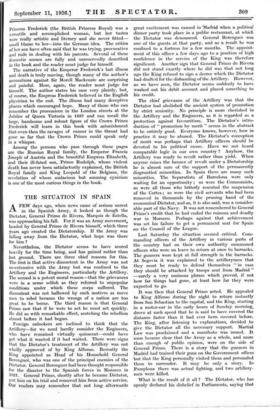 wE must add something to what we said last week about the forthcoming publication in the Spectator of the most interesting portions of the book just written by the Ex-German Emperor. The serial rights of the book, which is entitled My Early Life, have been bought by the Spectator, and none of the autobiography will appear in Great Britain except in the Spectator, until it is published in book form by Messrs. Methuen later in the year.

Beginning with next week, September 18th, we shall publish a series of seven supplements contain*ng a trans- lation of those parts of the book which we have selected. The book is written very frankly and has historical importance because it describes the methods by which a German Emperor was trained. It ends with the author's accession to the throne so that it has nothing to do with the War or the policy which immediately led up to the War. We can promise our readers that we shall provide them with reading which is at once instructive and very entertaining. The ex-Emperor writes, except in a single instance, without bitterness. That instance is the medical treatment of his father, the Emperor Frederick; by the English physician, Sir Morell Mackenzie. For the rest, as the author is never writing on the defensive, he is able to invest his words with a good deal of the charm of reminiscence ; he is recalling the days when the present was certainly full of glory and the future was certainly full of hope.

Let us mention the main points which we find upper- most in our mind after reading the book. To begin with, the language, as the translators have noticed, is without German heaviness or involution. We wonder whether this is due to the author's cosmopolitan use of languages. No doubt when writing he had his eye on the world, even more than upon Germany, and he was probably thinking as much in the English idiom as in any other. The atmosphere into which he was born was, as he says, a military one. Yet the German people as a whole had not changed their old easy-going philo- sophizing temper for the pursuit of a blood and iron policy which later possessed them and brought them first a unity that impressed the whole world but in the end colossal disaster. The author's father, the Crown Prince Frederick, in spite of Bismark who callously treated his own shrewd and successful series of wars (the Danish War, the Austro-German War and the Franco-German War) as the means of uniting the German States, wanted to save something of the old German liberal spirit for his son's education. Prince Frederick (afterwards the Emperor Frederick) clung to a romantic conception of Germany as the direct inheritor of the Holy. Roman Empire. In vain would anybody have told him that that organization was not Holy, was not Roman and was not an Empire. Later, when he became Emperor, he wanted to be crowned as Frederick IV., but Bismarck enbreed his opinion that the Holy Roman Empire idea was rubbish and that the Emperor Frederick, who would draw all his authority from Prussian kings, must be Frederick III.

The Crown Prince Frederick, then, in planning the education of his son, desired that he should receive mainly a civil education. But that was not to be ; the growing militarism was too strong for him. In spite of the predominantly military character of the author's education he was lucky enough to be put into the hands of a Dr. Hinzpeter, of whom he 'draws a memorable picture. It was mainly due to this worthy Calvinistic pedagogue that the future Emperor was sent to school and to Bonn University, and was made to find his level among various classes and types. One sees the wisdom of this method of education—wise in itself though lamentable in its later results—when one compares it with that of the late King Edward who was placed in a kind of majestic isolation with only officially chosen friends. One thing which the admirable Hinzpeter implanted in the future Emperor was a sympathy with the wage-earners, whose conditions were then, for the most part, deplorable. The author never lost this sym- pathy, and he describes how a manifestation of it shortly before he came to the throne brought him into sharp conflict with Bismarck. What a Spartan discipline the boy went through ! His brother, Prince Henry, was moved to tears when he saw hiin with his withered arm, which at first made balance almost impossible, being thrown about and bruised almost beyond endurance in the riding school.

As the author grew in authority he undertook with courage, though perhaps also without tact, the reform of the fashionable military Union Club, which was a hot-bed of gambling. No doubt he thought that this extravagance made the Army an impossible profession for a poor man. Perhaps the subsequent situation may be fairly described by saying he had " Society against him." After his military training he served in almost every department of the Government. This gave him an insight into everything, though it is impossible to avoid the suspicion that he learned too much to learn anything thoroughly.

After he has completed his education we see him sent on various missions abroad, and we at once discover the causes of the recurrent estrangements between him and his father and mother. The beginnings of the illness from which Prince Frederick ultimately died only about three months after he had become Emperor was, of course, the excuse for not sending him, and for preferring his son. But reading between the lines one may conclude with reasonable certainty that Bismarck was glad of the excuse. Bismarck mistrusted Prince Frederick's liberal tendencies.

The author, when he was introduced into the Foreign Office, brought with him a deep admiration for Bismarck, but he soon began to feel that Bismarck's policy was short measure, because it ended with the uniting of Germany. Bismarck was not interested in a colonial policy and hardly at all in the Navy. The future William IL seized his opportunity one day when Bismarck thundered out his anger at a complacent statement from a German emu. munity abroad that they considered they had adequate protection from the British Navy. Bismarck regarded this as humiliating, and Prince William fairly retorted in effect : " Well, what can you expect if we have not got a Navy ourselves ? " This is the most dramatic glimpse in the book of the ideal which was destined by mishandling to upset the whole world. We see the supremacy of the German idea in Prince William's mind again when he deliberately, but with gestures of high sincerity, sacrificed what seemed to be the happiness of his sister Princess Victoria, who wished to marry Prince Alexander of Battenberg. Prince Alexander had been made Prince of Bulgaria and the marriage would undoubtedly have been a temporary political inconvenience to Germany, but still— ! Our judgment goes entirely with Queen Victoria and the British Royal family who in vain supported the cause of the unhappy Princess.

To return, however, to the relations of the author with his parents. Bismarck was the thorn. The Crown Princess Frederick (the British Princess Royal) was a versatile and accomplished woman, but her tastes were really artistic and literary and she never fitted— small blame to her—into the German idea. The critics of her son have often said that he was trying, provocative and rude in dealing with his parents. Several of these domestic scenes are fully and unreservedly described in the book and the reader must judge for himself.

The narrative of the Emperor Frederick's last illness and death is truly moving, though many of the author's accusations against Sir Morel! Mackenzie are surprising and painful. Here, again, the reader must judge for himself. The author states his case very plainly, but, of course, the Empress Frederick believed in the English physician to the end. The illness had many deceptive phases which encouraged hope. Many of those who can remember the processions in the London streets at the Jubilee of Queen Victoria in 1887 and can recall the large, handsome and robust figure of the Crown Prince Frederick will learn in this book with astonishment that even then the ravages of cancer in the throat had gone so far that the Crown Prince could speak only in a whisper.

Among the persons who pass through these pages are the Russian Royal family, the Emperor Francis Joseph of Austria and the beautiful Empress Elizabeth, and their ill-fated son, Prince Rudolph, whose violent death has never been satisfactorily explained, the British Royal family and King Leopold of the Belgians, the revelation of whose audacious but amusing cynicism is one of the most curious things in the book.