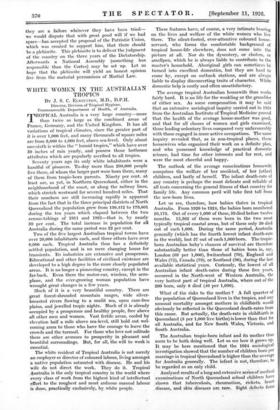 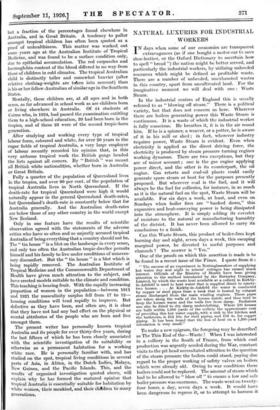 WHITE WOMEN IN THE AUSTRALIAN TROPICS

TROPICAL Australia is a very large country—more than twice as large as the combined areas of France, Germany, and the United Kingdom. It has all variations of tropical climates, since the greater part of it is over 1,000 feet, and many thousands of square miles are from 3,000 to 4,000 feet, above sea-level. Only about one-sixth is within the " humid tropics," which have over 50 inches of rain yearly, and possess those hothouse attributes which arc popularly ascribed to all tropics.

Seventy years ago its only white inhabitants were a handful of pioneers. To-day more than 200,000 people live there, of whom the larger part were born there, many of them from tropic-born parents. Ninety per cent. at least are, as yet, in Northern Queensland, either in the neighbourhood of the coast, or along the railway lines, which stretch westward for several hundred miles. That their numbers arc still increasing rapidly is apparent from the fact that in the three principal districts of North Queensland the population grew from 130,412 to 179,801 during the ten years which elapsed between the two census-takings of 1911 and 1921—that is, by nearly 89 per cent. The total increase in population for all Australia during the same period was 22 per cent.

Two of the five largest Australian tropical towns have over 20,000 inhabitants each, and three others have over 6,000 each. Tropical Australia thus has a definitely settled population, and is no mere changing house for transients. Its industries are extensive and prosperous. Educational and other facilities of civilized existence are developed to a high degree in the more closely populated areas. It is no longer a pioneering country, except in the far-back. Even there the motor-car, wireless, the aero- plane, and the ever-growing woman population have wrought great changes in a few years.

Much of it is a very beautiful country. There are great forest-shrouded mountain ranges, wide silver- breasted rivers flowing to a sunlit sea, open care-free plains, and jewelled tropic nights. Much of it is already occupied by a prosperous and healthy people, free above all other men and women. Vast fertile areas, cooled by elevation half a mile above sea-level, still hold out wel- coming arms to those who have the courage to leave the crowds and the turmoil. For those who love not solitude there are other avenues to prosperity in pleasant and beautiful surroundings. But, for all, the will to work is essential.

The white resident of Tropical Australia is not merely an employer or director of coloured labour, living amongst a native population saturated with disease. He and his wife do not direct the work. They do it. Tropical Australia is the only tropical country in the world where every class of work from the highest kind of intellectual effort to the roughest and most arduous manual labour is done, practically exclusively, by ,white people. These features have, of course, a very intimate bearing on the lives and welfare of the white women who live there. The silent-footed, ever-attentive coloured house- servant, who forms the comfortable background of tropical house-life elsewhere, does not come into the picture at all. Nor do the dysentery, or cholera, or smallpox, which he is always liable to contribute to the master's household. Aboriginal girls can sometimes be turned into excellent domestics, but they are hard to come by, except on outback stations, and are always liable to display disconcerting traits of character. White domestic help is costly and often unsatisfactory.

The average tropical Australian housewife thus works fairly hard. It is no life for the weakling or the grumbler of either sex. As some compensation it may be said that an extensive sociological inquiry carried out in 1924 from the Australian Institute of Tropical Medicine proved that the health of the average house-mother was good, and that for all classes of women and girls examined, those leading sedentary lives compared very unfavourably with those engaged in more active occupations. The same inquiry revealed that, as in non:tropical places, those housewives who organized their work on a definite plan, and who possessed knowledge of practical domestic science, had time for other interests and for rest, and were the most cheerful and happy.

The outlook of the average conscientious housewife comprises the welfare of her merikind, of her (otheii children, and lastly of herself. The infant death-rate of any country is perhaps the most delicate and reliable of all tests concerning the general fitness of that country for family life. Any common peril will take first toll from the new-born lives.

Let us see, therefore, how babies thrive in tropical Australia. From 1920 to 1924, the babies born numbered 26,175. Out of every 1,000 of these, 59 died before twelve months. 15,562 of them were born in the two most typically tropical coastal areas, but of these only 50 died out of each 1,000. During the same period,. Australia generally (which has the fourth lowest infant death-rate in the world), lost 57 out of each 1,000 born. The tropic- born Australian baby's chances of survival are therefore substantially better than those of babies born in, say, London (69 per 1,000), Switzerland (70), England and Wales (75), Canada (79), or Scotland (98), during the last available statistical years. Curiously, the lowest of all Australian infant death-rates during these five years, occurred in the North-west of Western Australia, the very hottest part of tropical Australia, where out of the 200 born, only 8 died (40 per 1,000).

What of the risks to the mother ? A full quarter of the population of Queensland lives in the tropics, and any unusual mortality amongst mothers in childbirth would obviously be reflected in the Queensland death-rates from this cause. But actually, the death-rate in childbirth in Queensland (5 per 1,000 live births) is lower than that for all Australia, and for New South Wales, Victoria, and South Australia.

The Australian tropic-born infant and its mother thus seem to be both doing well. Let us see how it grows up. It may be here mentioned that the 1924 sociological investigation showed that the number of children born per marriage in tropical Queensland is higher than the average for Australia generally. The infant is not, therefore, to be regarded as an only child.

Analysed results of a long and extensive series of medical examinations of North Queensland school children have shown that tuberculosis, rheumatism, rickets, heart disease, and skin diseases are rare. Sight defects form but a fraction of the percentages found elsewhere in Australia, and in Great Britain. A tendency to pallor amongst tropical children has often been quoted as a proof of unhealthiness. This matter was worked out some years ago at the Australian Institute of Tropical Medicine, and was found to be a surface condition only, due to epithelial accumulation. The red corpuscles and haemoglobin content of the blood differed in no way from those of children in cold climates. The tropical Australian child is distinctly taller and somewhat heavier (after relative clothing-weights are taken into account) than is his or her fellow-Australian of similar age in the Southern States.

Mentally, these children are, at all ages and in both sexes, as far advanced in school work as are children born or living elsewhere in Australia. Of 44 students at Cairns who, in 1924, had passed the examination entitling them to a high-school education, 89 had been born in the tropics, and of these 23 were of the second tropic-born generation. After studying and working every type of tropical labour force, coloured and white, for over 20 years in the sugar fields of tropical Australia, a very large employer of labour recently recorded his opinion that, in this very arduous tropical work the. British gangs headed the lists against all corners. By " British " was meant all British white nationalities, whether born in Australia or Great Britain.

Only in one feature have the results of scientific observation agreed with the statements of the adverse critics who have so often and so unjustly accused tropical Australia of being everything that a country should not be. The " tin house " is a blot on the landscape in every sense, and only too often the Australian tropic-dweller permits himself and his family to live under conditions of unneces- sary discomfort. But the " tin house " is a blot which is being rapidly removed. The Australian Institute of Tropical Medicine and the Commonwealth Department of Health have given much attention to the subject, and have erected models suitable to the climate and condition. This teaching is bearing fruit. With the rapidly increasing proportion of women in the population—between 1911 and 1921 the masculinity surplus fell from 17 to 12— housing conditions will tend rapidly to improve. But defective as they have been, and often are, it is clear that they have not had any bad effect on the physical or mental attributes of the people who are born and live amongst them.

The present writer has personally known tropical Australia and its people for over thirty-five years, during the last fifteen of which he has been closely associated with the scientific investigation of its suitability or otherwise as a permanent habitation for a working white race. He is personally familiar with, and has studied on the spot, tropical living conditions in several parts of Asia, in Africa, in the Dutch Indies, Malaya, New Guinea, and the Pacific Islands. This, and the results of organized investigation quoted above, will explain why he has formed the matured opinion that tropical Australia is essentially suitable for habitation by white women, their menkind, and their chXdren to many generations.