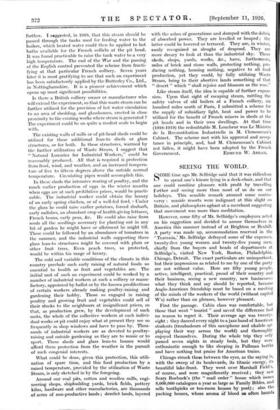 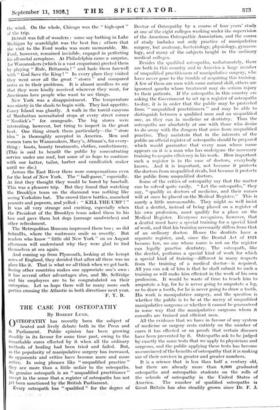 SOME time ago Mr. Selfridge said that it was ridiculous to spend one's leisure lying in a deck-chair, and that one could combine pleasure with profit by travelling f Irther and seeing more than most of us do on our holidays. This sensible remark aroused some contro- versy : seaside resorts were indignant at this slight on Britain, and philosophers aghast at a merchant suggesting that movement was more than meditation.

However, some fifty of Mr. Selfridge's employees acted on his suggestion and decided to amuse 'themselves in America this summer instead of at Brighton or Bexhill. A party was made up, accommodation reserved in the Tuscania,' Mr. Selfridge defrayed some of the expenses, twenty-five young women and twenty-five young men, chiefly from the buyers and heads of departments at Selfridge's, visited New York, Boston, Philadelphia, Chicago, Detroit. The exact particulars are unimportant, but their impressions as related to me by one of the party are not without value. Here are fifty young people, active, intelligent, practical, proud of their country and their business, seeing a new country, new businesses: what they think and say should be reported, because Anglo-American friendship must be based on a meeting of the minds of the workers of the world (without capital W's) rather than on phrases, however pleasant.

First the passage. Cabin class was comfortable, but those that went " tourist " and saved the difference had no reason to regret it. Their average age was twenty- eight ; they danced every night to a jazz band of American students (troubadours of this saxophone and ukalele age playing their way across the world) and thoroughly enjoyed themselves. During the whole trip they only passed seven nights in steady beds, but they were enthusiastic enough to like sleeping in Pullman berths and have nothing but praise for American trains.

Chicago struck them between the eyes, as the saying is, with the sweep of its boulevards, its titanic energy, its beautiful lake-front. They went over Marshall Field's, of course, and were magnificently received ; they saw Sears Roebuck's (the " mail order " house which issues 8,000,000 catalogues a year as large as Family Bibles, and sells toothpicks or ten-room houses by post) ; also the packing houses, whose aroma of blood so often haunts the wind. On the whole, Chicago was the " high-spot " of the trip.

Detroit was full of wonders : some say bathing in Lake Michigan by searchlight was the best fun ; others that the visit to the Ford works was more memorable. Mr. Ford, however, remained invisible, engaged in perfecting his all-metal aeroplane. At Philadelphia came a surprise, for Wanamakers (which is a vast emporium) greeted them by playing " Rule, Britannia ! " and bade them farewell with " God Save the King ! " In every place they visited they went over all the great " stores " and compared notes as to their problems. It is almost needless to say that they. were kindly received wherever they went, for Americans love people who want to see things.

New York was a disappointment. The temperature was ninety in the shade to begin with. They lost appetite. Coney Island was ghastly. A walk in the torrid canyons of Manhattan necessitated stops at every street corner " Needick's " for orangeade. The big stores were interesting, however, but tiring to inspect in the great heat. One thing struck them particularly—the " store idea " is thoroughly accepted in America. Men and women turn to Wanamakers, Macy's, Altman's, for every- thing : boots, beauty treatments, clothes, confectionery. (This is said to . benefit the public by concentrating service under one roof, but some of us hope to continue with our hatter, tailor, barber and candlestick maker until we die.) Across the East River there were compensations even for the heat of New York. The " ball-game," especially. At first they thought they would be bored by baseball. This was a pleasure trip. But they found that watching the Brooklyn team on the diamond was nothing like seeing Yorkshire bat. The crowd threw bottles, munched peanuts and popcorn, and yelled : " KILL THE UMP ! It was all very strange and exciting, especially when the President of the Brooklyn team asked them to his box and gave them hot dogs (sausage sandwiches) and other refreshment.

The Metropolitan Museum impressed them too ; so did Schraffts, where the waitresses smile so sweetly. But readers who know " little old New York " on an August afternoon will understand why they were glad to find themselves at sea again.

And coming up from PlyMoutli, looking at the kempt acres of England, they decided that after all there was no place like it. That is what we all think when we get back. Seeing other countries makes one appreciate one's own : it has several other advantages 'also, and Mr. Selfridge and his • employees are to be congratulated on their enterprise. Let us hope there will be many more such parties crossing the Atlantic in both directions next year.