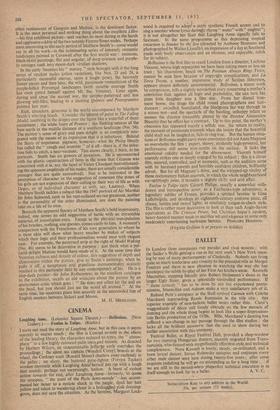 I HAVE not read the story of Laughing Anne, but in this case it seems scarcely to matter much ; the film is Conrad re-told in the idiom of the lending library, the characters reduced to types, the " atmos- phere" to a few highly coloured palm trees and sunsets. As directed by Herbert Wilcox, an unaccountable lethargy early overtakes the proceedings ; the silent .sea captain (Wendell Corey) broods at the wheel, the Cockney cook (Ronald Shiner) chatters away endlessly in the galley ; on shore, the battered prize-fighter (Forrest Tucker) smokes morosely while Laughing Anne herself lets rip with a laugh that sounds, perhaps not surprisingly, hollow. A burst of violent action towards the end, after Laughing Anne—formerly, to quote the synopsis, " the toast of the Paris demi-monde"--has accom- panied her boxer to a remote shack in the jungle, dyed her hair yellow and taken to wandering about in a bedraggled pink dressing- gown, does not save the situation. As the heroine, Margaret Lock- wood is required to adopt a coyly synthetic French accent and to sing a number whose lyrics daringly rhyme" water" with" oughter"; it is not altogether her fault that Laughing Anne signally fails to fascinate. In the same programme as this depressing tropical excursion is Sunday by rhe Sea (directed by Anthony Simmons and photographed by Walter Lassally), an impression of a day at Southend made with lively observation and an obvious, and enjoyable, relish for its subject.

Bellissima is the first film to reach London from a director, Luchino Visconti, whose high reputation we have been taking more or less on trust ; his Ossessione, based on The Postman Always Rings Twice, cannot be seen here because of copyright complications, and La Terra Trento, a sombre, impressive study of Sicilian fishermen, appears almost definitely uncommercial. Bellissima, a minor work by comparison, tells a slightly novelettish story concerning a mother's conviction that, against all logic and probability, she can turn her plain little daughter into a film star. From her dismal tene- ment home, she drags the child round photographers and hair- dressers ; swindled, humiliated, she bludgeons her way through to a screen test—and the spectacle of the bawling, unhappy infant so amuses the director (smoothly played by the director Alessandro Blasetti) that he offers her a contract. Up to this point, the mother's obsession has appeared mainly a selfish one, the return to reality, the moment of passionate triumph when she insists that the beautiful child shall not he laughed at, fails to ring true. But the human situa- tions of Bellissima might carry more conviction did not Anna Magnani so overwhelm the film ; expert, showy, stridently-high-powered, her performance still seems nine-tenths on the surface. It lacks the emotional validity needed for the denouement. Visconti himself scarcely strikes one as deeply engaged by his subject ; this is a clever film, assured, controlled, and at moments, such as the audition scene with its harassed parents and horribly confident children, brilliantly adroit. But for all Magnani's drive, and the whipped-up vitality of those declamatory Italian quarrels, in which the whole neighbourhood ear-splittingly joins, it remains a slightly ch:lly and arid affair.

Fan fan la Tulipe casts Gerard Philipe, usually a somewhat with- drawn and introspective actor, as a Fairbanks-type adventurer, a legendary soldier of France, provides a spirited heroine in Gina Lollobrigida, and develops an eighteenth-century costume piece, all chases, battles and sword 'fights, in resolutely tongue-in-cheek style. The film is rather more decorative to look at than such Anglo-Saxon equivalents as The Crimson Pirate, but Christian Jaque's opulent, heavy-handed manner tends to sacrifice wit and elegance to some only moderately entertaining burlesque heroics. PENELOPE HousroN.

(Virginia Graham is at present on holiday)