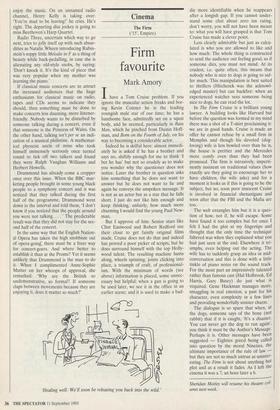 Ihave a Tom Cruise problem. If you ignore the muscular action freaks and bor- ing Kevin Costner he is the leading youngish male star of our time; he has a handsome face, admittedly set on a squat body, and he seemed, particularly in Rain Man, which he pinched from Dustin Hoff- man, and Born on the Fourth of July, on his way to becoming a considerable actor.

Indeed he is skilful here: almost immedi- ately he is asked if he has a brother and says no, shiftily enough for me to think 'I bet he has' but not so crudely as to make you wonder why the questioner does not notice. Later the brother in question asks him something that he does not want to answer but he does not want to lie and again he conveys the unspoken message. It is not as an actor but as a star that he falls short. I just do not like him enough and keep thinking, unfairly, how much more charming I would find the young Paul New- man.

But I approve of him. Senior stars like Clint Eastwood and Robert Redford use their clout to get faintly original films made. Cruise does not do that and indeed has proved a poor picker of scripts, but he does surround himself with the top Holly- wood talent. The resulting machine hums along, wheels spinning, joints clicking into place, a triumph of craft, of professional- ism. With the minimum of words (see above) information is placed, some unnec- essary but helpful: when a gun is going to be used later, we see it in the office in an earlier scene; and it is used to make a bad- `Healing well. We'll soon be releasing you back into the wild.' die more identifiable when he reappears after a longish gap. If you cannot under-

stand some chat about zero tax rating, don't worry, you will not have been meant to: what you will have grasped is that Tom Cruise has made a clever point.

Less clearly admirable but just as calcu- lated is who you are allowed to like and how much. The whole thing is constructed to send the audience out feeling good, so if someone dies, you must not mind. At its crudest, i.e. quite often, this means that nobody who is nice to dogs is going to suf- fer much. This manipulation is best suited to thrillers (Hitchcock was the acknowl- edged master) but can backfire: when an experienced watcher sees someone being nice to dogs, he can read the lot.

In The Firm Cruise is a brilliant young lawyer. A building looks like Harvard but

before the question was formed in my mind there was a shot of a T-shirt proclaiming it: we are in good hands. Cruise is made an offer he cannot refuse by a small firm in Memphis and though his devoted (dog- loving) wife is less bowled over than he is, the house is prettier and the Mercedes more comfy even than they had been promised. The firm is intrusively, imperti- nently insistent on traditional values (how exactly are they going to encourage her to have children, the wife asks) and for a moment it looks as if this is going to be the subject, but no, soon poor innocent Cruise is involved in financial shenanigans and soon after that the FBI and the Mafia are too.

The web entangles him but it is a ques- tion of how, not if, he will escape. Some have found it too complex but for once I felt I had the plot at my fingertips and thought that the only time the technique faltered was when they explained what you

had just seen at the end. Elsewhere it tri- umphs, even helping out the acting. The

wife has to suddenly grasp an idea in mid- conversation and this is done with a little tinkle of piano notes on the sound track.

For the most part an impressively talented rather than famous cast (Hal Holbrook, Ed Harris, Gary Busey) do just what is required. Gene Hackman manages more, smuggling in real emotion, a past for his character, even complexity in a few lines and providing wonderfully sinister charm.

The dialogue is so spare that when, at the dogs, someone says of the bone (not rabbit) that if it is caught, 'It's a disaster. You can never get the dog to run again', you think it must be the Author's Message. Perhaps it is. Other messages have been suggested — Eighties greed being called into question by the moral Nineties, the ultimate importance of the rule of law but they are not so much untrue as uninter- esting. The Firm is not about anything but plot and as a result it fades. As I left the cinema it was a 7, an hour later a 6.