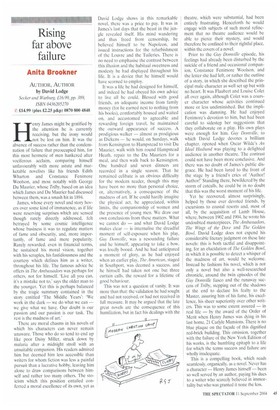 Henry James might be gratified by the attention he is currently receiving, but the irony would not be lost on him. It was the absence of success rather than the condemnation of failure that preoccupied him, for this most hermetic of men hankered after vociferous acclaim, comparing himself unfavourably with more astute and marketable novelists like his friends Edith Wharton and Constance Fenimore Woolson, and most notably with George Du Maurier, whose Trilby, based on an idea which James and Du Maurier had discussed between them, was a smash hit in 1894.

James, whose every novel and story hovers over some kind of immanence, as if life were reserving surprises which are sensed though rarely directly addressed, felt betrayed by some cosmic intelligence whose business it was to regulate matters of fame and obscurity, and, more importantly, of fame and mere popularity. Rarely rewarded, even in financial terms, he sustained his moral vision, together with his scruples, his fastidiousness and the courtesy which defines him as a writer, throughout his life. The famous advice he offers in The Ambassadors was perhaps for others, not for himself. 'Live all you can, it's a mistake not to,' says the older man to the younger. Yet this is perhaps balanced by the tragic summary contained in the story entitled 'The Middle Years': 'We work in the dark — we do what we can — we give what we have. Our doubt is our passion and our passion is our task. The rest is the madness of art.'

There are moral chasms in his novels of which his characters can never remain unaware. Those who do so tend to end up like poor Daisy Miller, struck down by malaria after a midnight stroll with an unsuitable companion. His readers admired him but deemed him less accessible than writers for whom fiction was less a painful pursuit than a lucrative hobby, leaving him alone to draw comparisons between himself and rather too many others. The stoicism which this position entailed conferred a moral excellence of its own, yet as David Lodge shows in this remarkable novel, there was a price to pay. It was in James's last days that the beast in the jungle revealed itself. His mind wandering and thus freed from censorship, he believed himself to be Napoleon, and issued instructions for the refurbishment of the Louvre and the Tuileries. There is no need to emphasise the contrast between this illusion and the habitual sweetness and modesty he had displayed throughout his life. It is a device that he himself would have scorned to employ.

It was a life he had designed for himself, and indeed he had obeyed his own advice to live all he could. Blessed with good friends, an adequate income from family money (for he earned next to nothing from his books), comfortably housed and waited on, and accustomed to agreeable and rewarding foreign travel, he maintained the outward appearance of success. A prodigious walker — almost as prodigious as Dickens — he would. on Sundays, walk from Kensington to Hampstead to visit Du Maurier, walk with him round Hampstead Heath, repair to the Du Mauriers for a meal, and then walk back to Kensington. One hundred and seven dinners are recorded in a single season. That he remained celibate is an obvious difficulty for the modern reader, though this may have been no more than personal choice, or, alternatively, a consequence of the madness of art. If he could hardly imagine the physical act, he appreciated, within limits, the companionship of women and the presence of young men. We draw our own conclusions from these matters. What we cannot do — and what David Lodge makes clear — is internalise the dreadful moment of self-exposure when his play, Guy Donwille, was a resounding failure and he himself, appearing to take a bow, was loudly booed. And he had anticipated a moment of glory, as he had enjoyed when an earlier play. The American, staged in Southport. was deemed a success, and he himself had taken not one but three curtain calls, the reward for a lifetime of good behaviour.

This was not a question of vanity. It was more than that: the validation he had sought and had not received, or had not received in full measure. It may be argued that the late great novels are the consequence of this humiliation, but in fact his dealings with the theatre, which were substantial, had been entirely frustrating. Henceforth he would engage with subjects of such moral refinement that no theatre audience would be able to pierce their mystery, and would therefore be confined to their rightful place, within the covers of a novel.

Prior to the Guy Domville episode, his feelings had already been disturbed by the suicide of a friend and occasional companion, Constance Fenimore Woolson, and the letter she had left, or rather the outline of a story, in which she described the principal male character as well set up but with no heart. It was Flaubert and Louise Colet all over again, although Colet was a coarser character whose activities continued more or less undiminished. But the implication was damning. He had enjoyed Fenimore's devotion to him, but had been careful to sidestep her suggestions that they collaborate on a play. His own plays were enough for him. Guy Domville, to which David Lodge devotes a brilliant chapter, opened when Oscar Wilde's An Ideal Husband was playing to a delighted audience in another theatre. The contrast could not have been more conclusive. And there was no doubt of James's public disgrace. He had been lured to the front of the stage by a friend's cries of 'Author! Author!' Standing there, bewildered by the storm of catcalls, he could be in no doubt that this was the worst moment of his life.

Yet he recovered, almost surprisingly, helped by those ever devoted friends, by excursions to coastal resorts and, most of all, by the acquisition of Lamb House, where. between 1902 and 1904, he wrote his undoubted masterpieces, The Ambassadors, The Wings of the Dove and The Golden Bowl. David Lodge does not expend his considerable literary judgment on these late novels: this is both tactful and disappointing, for an elucidation of The Golden Bowl, in which it is possible to detect a whisper of the madness of art, would be welcome. Instead he fashions his novel, which is not only a novel but also a well-researched chronicle, around the twin episodes of the Guy Domville fiasco and the runaway success of Trilby, stepping out of the shadows at the end to declare his fealty to the Master, assuring him of his fame, his excellence, his sheer superiority over other writers. This was to some extent assured — in real life — by the award of the Order of Merit when Henry James was dying in his last home, 21 Carlyle Mansions. There is no blue plaque on the façade of this dignified red-brick building. This omission, together with the failure of the New York Edition of his works, is the humbling epitaph to a life for which the terms success and failure are wholly inadequate.

This is a compelling book, which reads seamlessly, organically, as a novel. Never has a character — Henry James himself — been so well served by an author, paying his dues to a writer who scarcely believed in immortality but who was granted it none the less.