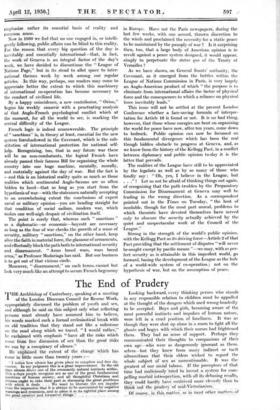 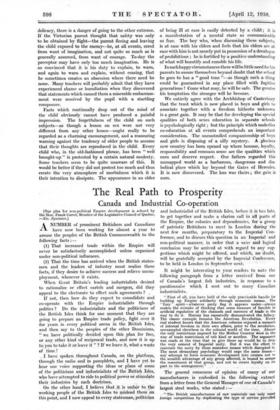 The End of Prudery

THE Archbishop of Canterbury, speaking at a meeting of the London Diocesan Council for Rescue Work, appropriately discussed the problem of youth and sex, and although he said on this subject only what reflecting persons must already have assumed him to believe, his words marked such a formal ecclesiastical break with an old tradition that they stand out like a milestone on the road along which we travel. " I would rather," he exclaimed with emphasis "have all the risks which come fiord free dismission of sex than the great risks we run by a Conspiracy of silence." • Ile eiplained -the extent of the change which his come in little more than twenty years :— " I notice how silence has given place to complete and free dis- cussion. in my judgment this is a gteat improvement. In the old days silence drove one of the necessarily natural instincts within. Now-is-days peoPle recognizo sex as one of the great fundamental qUeetions bf human society; and all thoughtful- Christians and citizen ought to take their part in discussing the great problems with which it deals. . . . We want to liberate the sex impulse ' from the iMpression that it is alviays to- be surrounded by negative warnings and restraints, and to place it in its rightful place among the greet. creative a and formative things." Looking backward, every thinking person who stands in any responsible relation to children must be appalled at the thought of the dangers which used wrong-headedly to be accepted: Biwa and girls, becoming aware of the most powerful instincts and impulses of human nature, Were left in a cruel position of loneliness. It was as though they were shut up alone in a room to fight all the ghosts and bogys with which their nurses had frightened them. They had no - sense of support. Perhaps they communicated their thoughts to companions of their own agerlio were as dangerously ignorant as them- selves—but they knew from many indirect or tacit admonitions that their elders wished to regard the whole subject of 'sex as Unmentionable. It was the greatest of our social taboos. If the preceptors of that time had maliCiatialy tried to invent, a system for com- pelling morbid introspection, with all its debasing results, they could hardly ha've, contrived More cleverly than to think out the prudery of mid-Victorianism.

, course.. in tins matter. as in tryst othermatters; of

delicacy, there is a danger of going to the other extreme. If the Victorian parent thought that safety was only to be obtained by flight—the parent fleeing and leaving the child exposed to the enemy—he, at all events, erred from want of imagination, and not quite so much as is generally assumed, from want of courage. To-day the preceptor. may have only too much imagination. He is so convinced that it is his duty to explain, to warn, and again to warn and explain, without ceasing, that he sometimes creates an obsession where there need be none. Many teachers will probably admit that they have experienced shame or humiliation when they discovered that statements which caused them a miserable embarrass- ment were received by the pupil with a startling composure.

Facts which continually drop out of the mind of the child obviously cannot have produced a painful impression. The forgetfulness of the child on such subjects—as though a lesson on sex were not very different from any other lesson—ought really to be regarded as a charming encouragement, and a reassuring warning against the tendency of older people to assume that their thoughts are reproduced in the child. Every child who, in the old-fashioned phrase, has been " well brought-up " is protected by a certain natural modesty. Some teachers seem to be quite unaware of this. It would be better if they did not protest too much and thus create the very atmosphere of morbidness which it is their intention to dissipate. The appearance in an elder of being ill at ease is easily detected by a child ; it is a manifestation of a mental state as communicable as fear. The boy who, when discussing these subjects, is at ease with his elders and feels that his elders are at ease with him is not merely put in possession of a decalogue of prohibitions ; he is fortified by a positive understanding of what will beautify and ennoble his life.

In such happy circumstances there will be little need for his parents to assure themselves beyond doubt that the school he goes to has a " good tone "—as though such a thing could be guaranteed in any place filled with fugitive generations Come what may, he will be safe. The greater his temptation the stronger will he become.

We entirely agree with the Archbishop of Canterbury that the trust which is now placed in boys and girls to associate together with a freedom hitherto unknown is a great gain. It may be that for developing the special qualities of • both sexes education in separate schools is psychologically right ; but the principle which underlies co-education at all events comprehends an important consideration. The uncontrolled companionship of boys and girls is disposing of a silly mystery. A glorious new country has been opened up where honour, loyalty, responsibility and common sense are the qualities which earn and deserve respect. Our fathers regarded this unmapped world as a barbarous, dangerous and dia- bolical place which lay beyond the Gates of Hercules. It is now discovered. The loss was theirs ; the gain is ours.