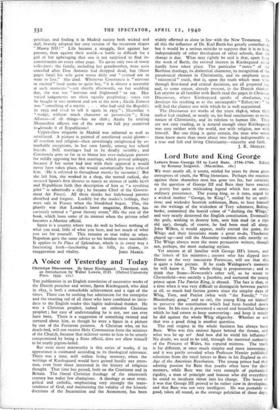 A Voice of Yesterday and Today

THE publication in an English translation of successive works of the Danish preacher and writer, SOren Kierkegaard, who died in 1855, is both a remarkable achievement and a sign of the times. There can be nothing but admiration for the enterprise and the exacting toil of all those who have combined to intro- duce to the English reader this highly individual thinker. He was a Christian prophet, indeed an orthodox Christian prophet ; but easy of understanding he is not, nor can ever have been. There is a suggestion of something twisted and tortured about him, as though he were a figure in a picture by one of the Ferrarese painters. A Christian who, on his death-bed, will not receive Holy Communion from the minister of the Church, because that minister seems to him to be utterly compromised by being a State official, does not allow himself to be neatly pigeon-holed.

But even more noteworthy is this series of works, if its appearance is estimated according to its theological relevance. There was a time, well within living memory, when the writings of Kierkegaard would have gained hardly any atten- tion, even from those interested in the history of religious thought. That time has passed, both on the Continent and in Britain. The liberal Christian theology of the nineteenth century has today few champions. A theology at once evan- gelical and catholic, emphasising very strongly the trans- cendence of God, and maintaining the validity of the historic doctrines of the Incarnation and the Atonement, has been widely affirmed as alone in line with the New Testament. To all this the influence of Dr. Karl Barth has greatly contributed; but it would be a serious mistake to suppose that it is to him, independently of other theologians of other schools, that :he change is due. What may rightly be said is that, apart from the work of Barth, the revived interest in Kierkegaard could hardly have taken place. The particular " notes " of the Barthian theology, its dialectical character, its recognition of the paradoxical element in Christianity, and its emphasis upon " existential " truth, that is, upon the truth which man wins through first-hand and critical decisions, are all prepared for, and, to some extent, already present, in the Danish thinker. Let anyone at all familiar with Barth read the pages in Christian Discourses, where Kierkegaard speaks of obedience, and develops his teaching as to the untscapable " Either/or : " he will find the climate one with which he is well acquainted.

The Discourses are works of the years 1848-9, when their author had reached, or nearly so, his final conclusions as to the nature of ,Christianity, and its relation to human life. They are not easy reading, as is natural enough since Kierkegaard was easy neither with the world, nor with religion, nor with himself. But one thing is quite certain, the man who wrote them knew more than most about two things indispensable to a true and full and living Christianity—sincerity and faith.