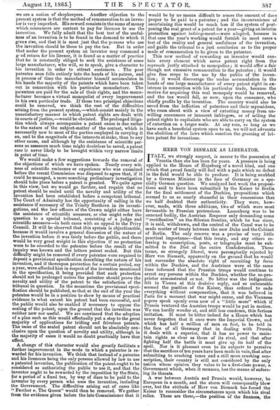 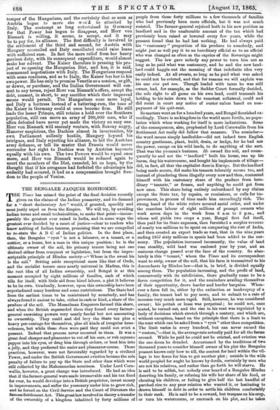 ITALY, we strongly suspect, is nearer to the possession of Venetia than she has been for years. A pressure is being applied to the House of Hapsburg of a novel kind, and one which that proud family will feel with a pain which no defeat in the field would be able to produce. It is being snubbed by a German Minister in the face of Germany on a spe- cially German question. We analyzed last week the proposi- tions said to have been submitted by the Kaiser to Berlin for the final settlement of the Duchies, propositions which seemed to us so nearly shameful in their concessions that we half doubted their authenticity. They were, how- ever, made, with three additions, two of which were most favourable to Prussian pretensions. Lauenburg was to be annexed bodily, the Austrian Emperor only demanding some "rectification" on the Silesian frontier, which he has since, it is said, withdrawn, and the control of the Canal was to be made matter of treaty between the new Duke and the Cabinet of Berlin. The only reserve was a proviso of very little practical importance—that this treaty, and any others re- ferring to conscription, posts, or telegraphs must be sub- mitted to the Diet of the entire Confederation. These terms, so strangely liberal, were peremptorily rejected by Herr von Bismark, apparently on the ground that he would not surrender the absolute right of recruiting by force within the Duchies, and the Austrians were at the same time informed that the Prussian troops would continue to arrest any persons within the Duchies, whether the co-pro- prietor remonstrated or not. So bitter was the indignation felt in 'Vienna at this decisive reply, and so unbearable seemed the position of the Kaiser, thus ordered to cede everything without compensation, that it was believed in Paris for a moment that war might ensue, and the Viennese papers speak openly even now of a "little more" which if Prussia ventured the Austrian troops would be put in motion. We can hardly wonder at, and still less condemn, this furious irritation. It must be bitter indeed for a House which has never forgotten that it once wore the Imperial Crown, and which has half a million of men on foot, to be told in the face of all Germany that in dealing with Prussia it deals with a superior, that it has no power to main- tain rights as clear as those of its rival, and that after fighting half the battle it must give up its half of the spoil. Nor is it pleasant even to its subjects to perceive that the sacrifices of ten years have been made in vain, that after submitting to crushing taxes and a still more crushing con- scription, their country is still not considered by the only nation whose opinion they value to be a first-class power, a Government which, when it menaces, has the means of enforc- ing its threats.

A war between Austria and Prussia would, however, be European in a month, and the storm will consequently blow over, but the attitude of Herr von Bismark has forced the Kaiser to reconsider the circumstances upon which his rival relies. These are three,—the position of the finances, the temper of the Hungarians, and the certainty that as soon as Austria began to move she wJu'd be attacked by Italy. The contempt so long entertained in Germany for that Power has begun to disappear, and Herr von Bismark is willing, it seems to accept, and it may be to pay for, its alliance. The first difficulty is involved in the settlement of the third and second, for Austria with Hungary reconciled and Italy conciliated could raise loans with sufficient ease. In fact the mere relief from her heavy garrison duty, with its consequent expenditure, would almost make her solvent. The Kaiser therefore is pressing his pro- ject of re-opening the Hungarian Diet, and has, it is said, commenced negotiations with Italy. The Hungarians respond with some readiness, and as to Italy, the Kaiser has her in his own power. He has only to promise Venetia as a cession, or gift, or dower, or purchase, and the Italian Government will con- sent to any terms, reject Herr von Bismark's offers, accept the debt, consent, in short, to any sacrifice which their improved means would permit. The Hungarians once more loyal, and Italy a buttress instead of a battering-ram, the tone of the Kaiser in Germany could at once become firm. He still leads the lesser Princes, still retains a hold over the Southern population still can move an army of 200,000 men, who if often defeated have never yet made the victory an easy one. Herr von Bismark will scarcely venture, with Saxony angry, Hanover suspicions, the Duchies almost in insurrection, his own Parliament sullenly hostile, Hungary beyond his intrigues, and Italy rejecting his alliance, to bid the Austrian army defiance, or tell its master that Prussia would never surrender her right to Duchies won by Austrian bayonets equally with his own. The two Powers would be equal once more, and Herr von Bismark would be reduced again to court the members of the Diet, consoled, let us hope, by the thought that if his arrogance had forfeited the advantages his audacity had secured, it had as a compensation brought free- dom to the people of Venice.