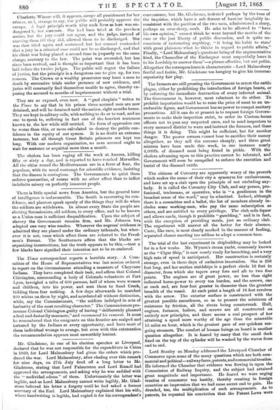 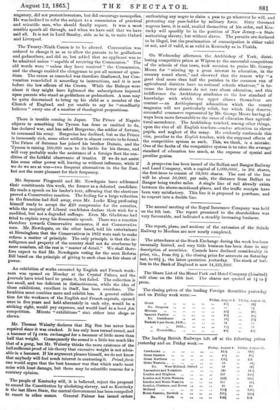 Lord Stanley on Monday addressed the Liverpool Chamber of Commerce

upon some of the many questions which are both com- mercial and political—railwayf area , patents, and commercial treaties. He informed the Chamber that evidence was flowing in upon the Commission of Railway Inquiry, and the subject had attained great magnitude and importance. He feared we were urging treaties of commerce too hastily, thereby creating in foreign countries an impression that we had some secret end to gain. He dreaded, too, the multiplication of such arrangements. As to patents, he repeated his conviction that the Patent Laws were nugatory, did not protect inventors, but did encourage monopolies. He was inclined to refer the subject to a commission of practical and scientific men, who should finally report. It was a most sensible speech all through, and when we have said that we have said all. It is not in Lord Stanley, able as he is, to unite Oxford and Liverpool.