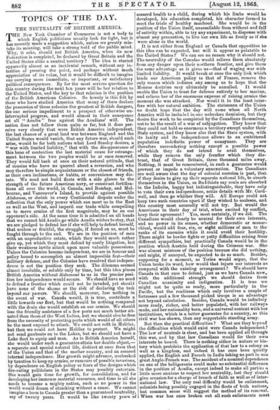 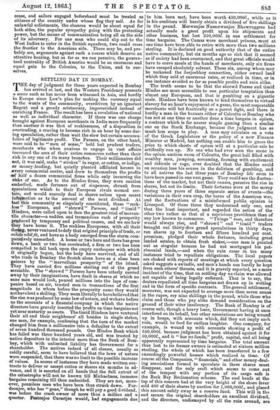 THE NEUTRALITY OF BRITISH AMERICA. THE New York Chamber of Commerce is not a body to which English politicians usually look for light, but it has recently made a suggestion which, unless we greatly mis- take its meaning, will take a strong hold of the public mind. Why, it asks, should not British America, when its new Federation is completed, be declared by Great Britain and the United States alike a neutral territory ? The idea is started apparently almost as an incidental remark, without any in- tention of pressing the point, and perhaps without much appreciation of its value but it would be difficult to imagine one carrying more immediate, or important, or satisfactory political consequences. By fur the most serious question for this country during the next ten years will be her relation to the United States, and the key to that relation is the position of the British American Colonies. So keenly is this felt by those who have studied America that many of them declare the possession of these colonies the greatest of British dangers, the one serious impediment to a prospect of otherwise un- interrupted progress' and would almost in their annoyance set all " Acadia " free against the Icadians' will. The nation does not follow them quite so far, but it does per- ceive very clearly that were British America independent, the last chance of a great land war between England and the United States would vanish, that any future war, should such arise, would be for both nations what Lord Stanley desires, a "war with limited liability," that with the disappearance of this bone of contention the last material cause for estrange- ment between the two peoples would be at once removed. They would fall back at once on their natural attitude, that of cousins who have no quarrel about a reversion, and who may therefore be simple acquaintances or the closest of friends, as their own inclinations, or habits, or convenience may dic- tate. We need not build fleets with a side glance to the strength of the future American navy, or construct fortifica- tions all over the world, in Canada, and Bombay, and Mel- bourne and Vancouver's Island, to provide against possible iliabanias, or shrink in every Continental dispute under the reflection that the only power which can meet us in the East as well as the West, and imperil our trade while compelling us to move armies of the first magnitude, may be on our opponent's side. At the same time it is admitted on all hands that we cannot bid Acadia go while Acadia wishes to stay, that we are pledged to defend her if she will help to defend herself, that useless or fruitful, the struggle, if forced on us, must be fought through to the end. We are in the position of men with an unproductive estate, which they would much rather give up, yet which they must defend by costly litigation, lest their weakness invite attack upon more valuable possessions. Unless the Colonies become independent, we are in honour and policy bound to accomplish an almost impossible feat—their military defenoe, and the Colonies have resolved that indepen- dence is not the position they seek. The dilemma seemed almost insoluble, or soluble only by time, but this idea places British America without dishonour to us in the precise posi- tion her independence would secure. We should have no need to defend a frontier which could not be invaded, yet should bave none of the shame or the risk of declaring the task beyond our powers. We should, moreover, lose nothing in the event of war. Canada would, it is true, contribute a little towards our fleet, but that would be nothing compared with the drain she would establish on our armies. We should lose the friendly assistance of a few ports not much better sit- uated than those of the West Indies, but we should also be free from the necessity of protecting ports which would of all others be the most exposed to attack. We could not refit in Halifax, but then we could not have Halifax to protect. We might not send gunboats on to the Lakes, but we should not have a Lake fleet to equip and man. As to British America herself, she would under such a guarantee attain her double object,— a separate and special natural life, distinct at once from that of the Union and that of the mother country, and an assured internal independence. Her growth might advance' unchecked by taxation to keep up armies, or rumours of possible invasions, by dependence on English policy or fears of the designs which fire-eating politicians in the States may possibly entertain. She would gain time for growth, for consolidation, and for developing her immense material resources, and time is all she needs to become a mighty nation, such as no power in the -world would dream of attacking without a cause. We cannot imagine a boon to Canada greater than a guaranteed neutrality, say of twenty years. It would be like twenty years of Iassured health to a child, during which his limbs would be developed, his education completed, his character formed to meet the trials of healthy manhood. She would be in the position of the Union itself, unassailable from without and fall of activity within, able to try any experiment, to dispense with almost any precaution, to live her own life as freely as if she were alone in the world.

It is not either from England or Canada that opposition to. this idea can be expected, but will it appear as palatable to the United States ? We can see no reason why it should not. The neutrality of the Canadas would relieve them absolutely from any danger upon their northern frontier, and give them the same advantage as it gives us—that of waging war with limited liability. It would break at once the only link which binds our American policy to that of France, remove the only reason which induces any among us to hope that the Monroe doctrine may ultimately be annulled. It would enable the Union to trust for defence entirely to her marine, and relieve her of the enormous expense of raising armies tim- moment she was attacked. Nor would it in the least inter- fere with her natural ambition. The statesmen of the Union no doubt hope that the day will come when all North America will be includel in one unbroken dominion, but they desire the work to be completed by the Canadians themselves, not to be the result of a war of subjugation. They know that. they could not hold so enormous a territory except under their State system, and they know also that the State system, with its laxity and its independence allows to an embittered population indefinite power of annoyance. They are therefore surrendering nothing except' a possible power of which they do not intend to avail themselves, while they remove the only frontier which they dis- trust, that of Great Britain, three thousand miles away. Nothing, it must be remembered, in such a guarantee would prevent or impede a voluntary annexation. The Canadians are well aware that the day of colonial coercion is past, that. if they desire to give up their separate national life, to absorb themselves in the -Union, as Buddhists say souls are absorbed in the Infinite, happy but indistinguishable, they have only to vote their own indspendence, settle details with Mr. Card.- well, and then go whither they will. All Europe could not. keep two such countries apart if they wished to coalesce, and. this country most assuredly will not try. But would the Americans in their day of trial, when excited by conflict,, keep their agreement? Yes, most certainly, if we did. The Canadians would clearly be neutral for their own interests, and no power in its senses, whether democratic or monar- chical, would add four, six, or eight millions of men to the ranks of its enemies while it could avoid their hostility. There might be border fights or petty difficulties arising from different sympathies, but practically Canada would be in the position which Austria held during the Crimean war. She was almost mistress of the position because she did nothing-,. and might, if annoyed, be expected to do so much. Besides,. supposing for a moment, as Tories would argue, that the Union broke its word, how would that injure our interests as. compared with the existing arrangement ? We should have Canada in that case to defend, just as we have Canada now, with the additional strength we should derive from Canadian unanimity and indignation. It is true we might not be quite so ready, more particularly in the Pacific, but the readiness which only involves a couple of fortresses and a few thousand picked troops is an advantage not beyond calculation. Besides, Canada would be infinitely more ready, richer, and better populated, with her railways made, and her nationality born, and a universal content with her institutions, which is a better guarantee for a country, as this. civil war has shown, than any supportable standing army.

But then the practical difficulties ? What are they beyond the difficulties which would exist were Canada independent ? The law of neutrals is clear, and has been applied all through this war, and by that law Canadians would for their own interests be bound. There is nothing either in nature or his- tory which prohibits the application of that law to a colony as well as a kingdom, and indeed it has once been quietly applied, the English and French in India taking no part in one great Anglo-French war. The accident of a nominal dependence on one of the belligerents could make no substantial difference in the position of Acadia, except indeed to make all parties a little more anxious to respect her neutrality, lest they should give occasion for a charge of breach of faith as well as of inter- national law. The only real difficulty would be enlistment, colonists being possibly engaged in the fleets of both nations, but common sense will suggest the method of its removal. When war has once broken out all such enlistments must cease, and sailors engaged beforehand must be treated as citizens of the country under whose flag they sail. As for unlawful enlistments, the chances would be about equal for both sides, the popular sympathy going with the protecting power, but the means of communication being all on the side of its adversary. For one man who could slip out to the West Indies to enter in the British squadron, two could cross the frontier to the American side. There may be, and pro- bably are, arguments against such a course which deserve an attentive hearing, but as far as we can perceive, the guaran- teed neutrality of British America would be an enormous and equal gain to the Colonies, to the -Union, and to our- selves.